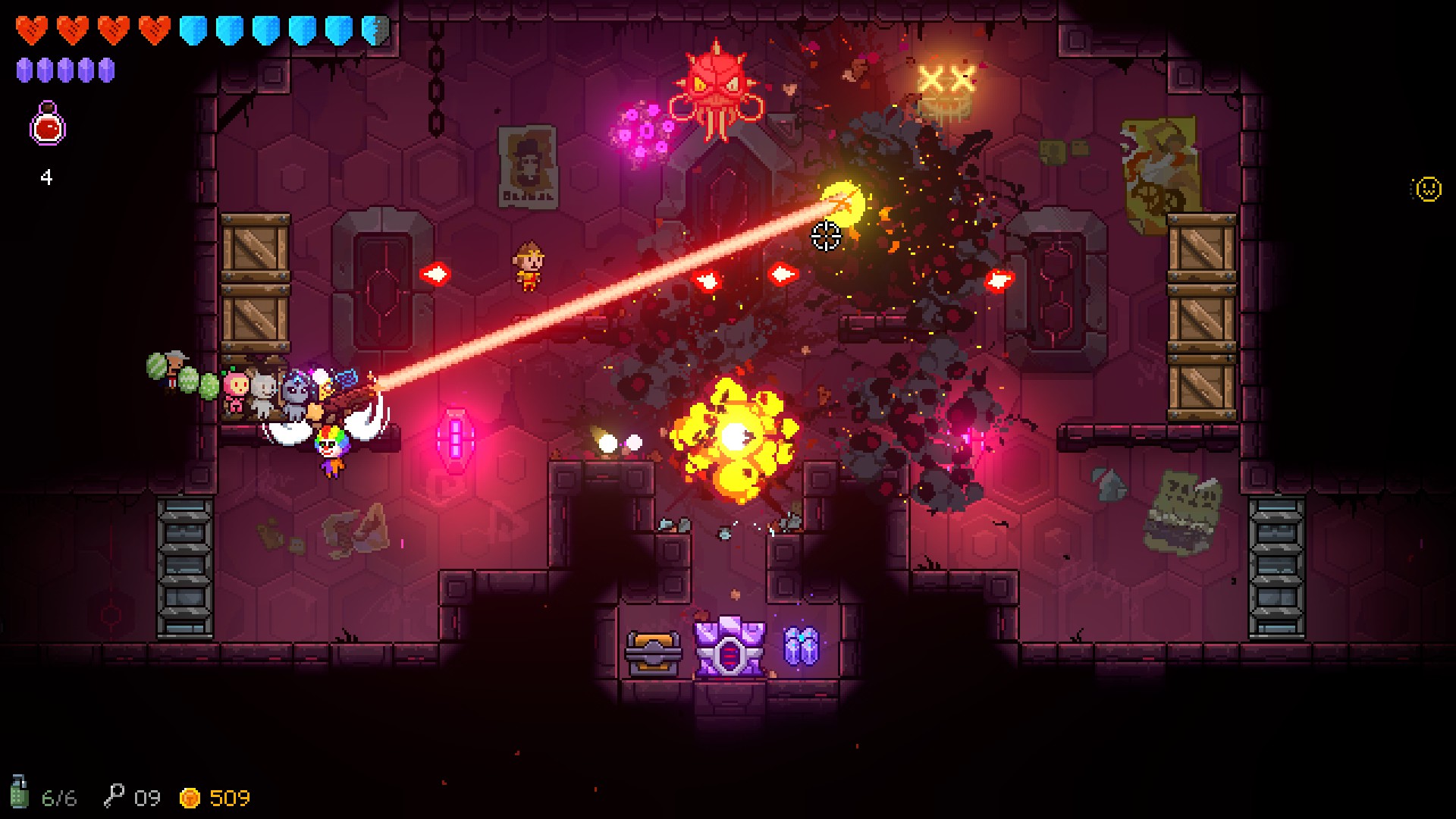 For years, I’ve fought tirelessly in a one-sided war against Rogue and its many associates. Roguelikes, rogue-lites, and everything in between have a way of eating up all my time in exchange for the smallest crumb of progress. An hour and several thrashings in and my battered brain is begging for a broken build. The subgenre is far from my forte; all I can do is roll the dice and pray for that golden run. But in Neon Abyss, Lady Luck is exceptionally generous, and whether intentional or not, that is the game’s greatest asset.

Some runs just won’t be in your favor — such is the nature of the subgenre. The same is true of Neon Abyss, but when the runs go well, they go really well. The game has its way of making you feel like a badass, and that power trip is enough to fuel a few future runs. You’re never more than a few steps away from grinding roomfuls of mobs to dust with your new, explosive, multi-laser, rapid-fire cat rifle. 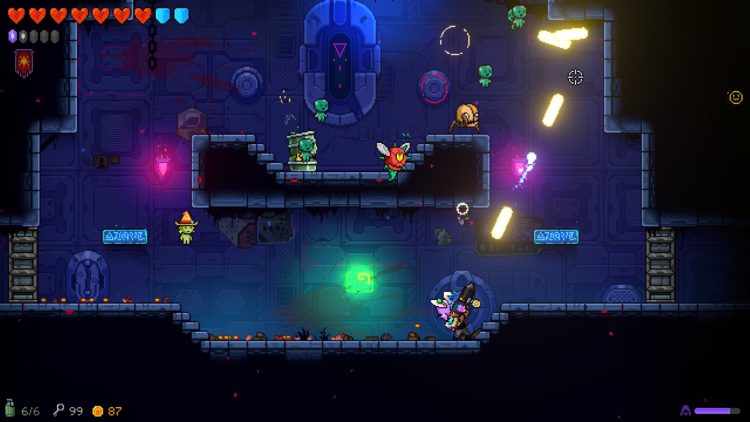 To hell and back, again

Neon Abyss is a run-and-gun roguelite that has you raising hell as one of Hades’ Grim Squad soldiers. From his nightclub above, the God of Death directs you down into the titular abyss to take out the New Gods that challenge him. Between the club and each God is a string of procedurally generated levels with enemies and loot galore. As you move further down the hit list, the quantity of levels increases, introducing more obstacles and bosses that threaten your advance.

Death is a certainty, and you’ll find yourself back on the nightclub dance floor time and time again enjoying a dystopian club mix straight from the underworld. There, Grim Squad members can trade in their hard-earned Faith Gems for new item sets and playable characters. With new items come improved odds for a lucrative go at the gauntlet below. 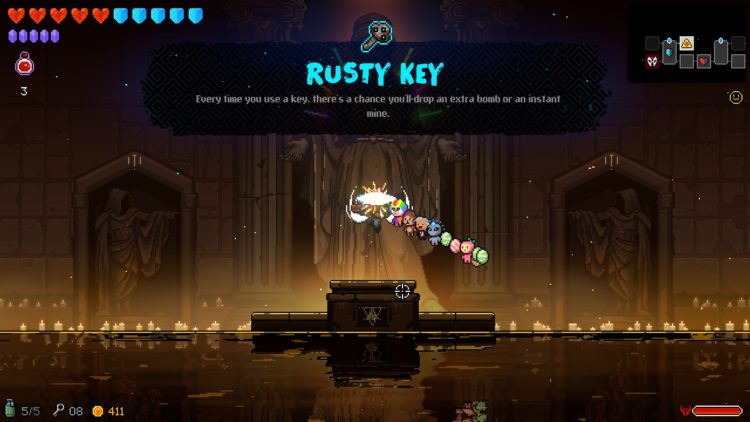 Despite its mystical, neon-accented battlegrounds, you wage war like you would in any other 2D shooter. Weaving through enemy fire is nothing new for the average roguelike enthusiast, either. However, a splash of platforming spices up the moment-to-moment experience of running and gunning. A plethora of weapons and tools, and the means of acquiring them, serve to inject some variety into otherwise plain firefights.

After choosing a character, you’re dropped into the first level with nothing but the starter weapon and a dream. Each level features a randomly generated series of room, populated with equally random sets of mobs and rewards. The usual suspects, from monsters that fly, shoot, melee, and explode, are ready to throw their lives away. Ending off every level is a boss encounter, which ranges from moderately challenging to absolutely trivial.

What’s more significant are the number of keys, crystals, coins, and grenades you can acquire — the currencies that pay for your stay in the abyss. Each is essential in acquiring new items conducive to a solid run. With the right currencies in hand, you have guaranteed access to a wealth of weapons and items that improve your odds. Most gates and chests demand you offer up one of these resources for a shot at better gear, health, and shields. 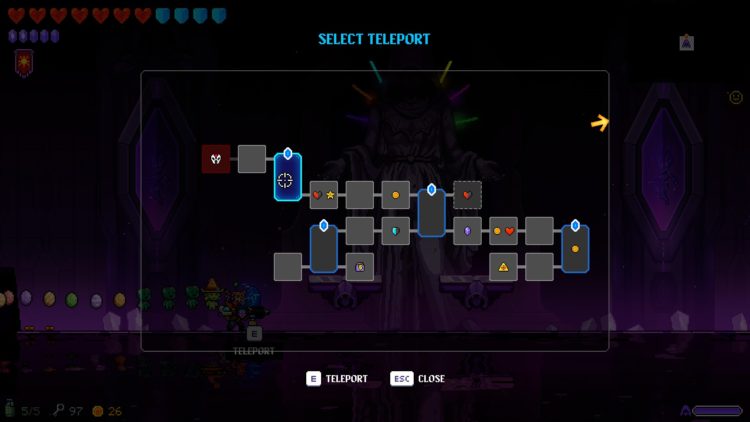 Plenty of rooms with plenty of items.

For the exceptionally unlucky, a faith system challenges the Grim Squad to stay their hands for bonus items. Certain chests, gates, and interactables, if opened with crystals, fill a gauge that unlocks a special room with goodies. Trigger happy players can still unlock a bonus room, but only after sacrificing a full heart container can they take their prizes. The deluge of different currencies and tasks to juggle bring order to the madness, encouraging you to make more deliberate choices as you clear rooms.

Arguably the most underwhelming aspect of the never-ending collect-a-thon are companion eggs. While your mini minions have value insofar as their interplay with certain items, the floating distractions do little to beef up your firepower. Their occasionally erratic movements contribute to a total visual overload; often I confused my many minions for enemies and vice versa.

Less is more, but Neon Abyss is bloated with excessive amounts of eggs and items. Memorizing which items offer what bonus is unnecessarily annoying given the fair amount of duplicate bonuses. But seeing as your pockets may be lined with dozens of items each run, sheer quantity appears to take precedence over actual performance. Beyond a handful of scenarios, you seldom have a say in which items and builds you want. 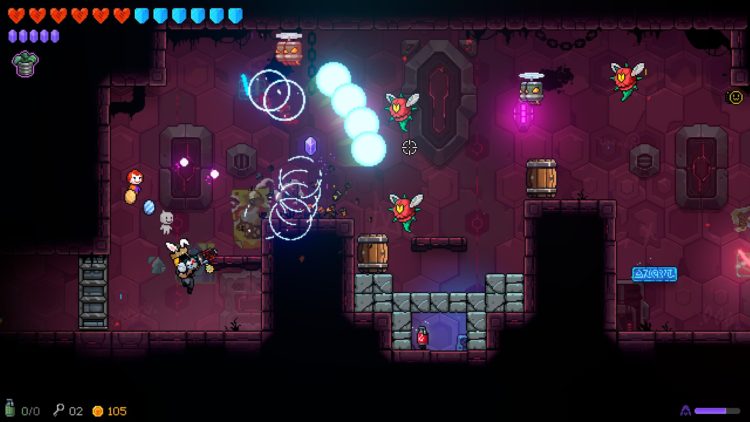 The rich get richer, as they say, and down in the abyss, items beget more items. With enough firepower to belittle every enemy encounter, you can safely smash your way through every room with no risk of dying. And, with the right items in hand, there might never be a need for coins, keys, or grenades again. Items that grant explosive shots, for example, remove the need for grenades to destroy obstacles, and beef up your attack power tremendously. It’s almost unfair how overpowered it is, but so many items are.

A few lucky drops is all it takes to snowball your way into an easy clear. As a result, alternate playstyles are tossed out the window, and replayability suffers as every decent build handles largely the same. Bosses, even the New Gods, can be stomped flat before they can get in more than a few attack rotations. Every character you unlock has special starting parameters and abilities, and even those play second fiddle to the item hunt.

To that extent, the high chance of becoming absurdly powerful is detrimental, but overall, it’s those opportunities that bring Neon Abyss to life. The game is not a particularly challenging rogue-lite, unlike its most famous contemporaries. And while some runs will be met with more opposition, the cathartic experience of rampaging through room after room is profoundly rewarding in its own right. There are higher difficulties, though, if your aching for a more challenging run. 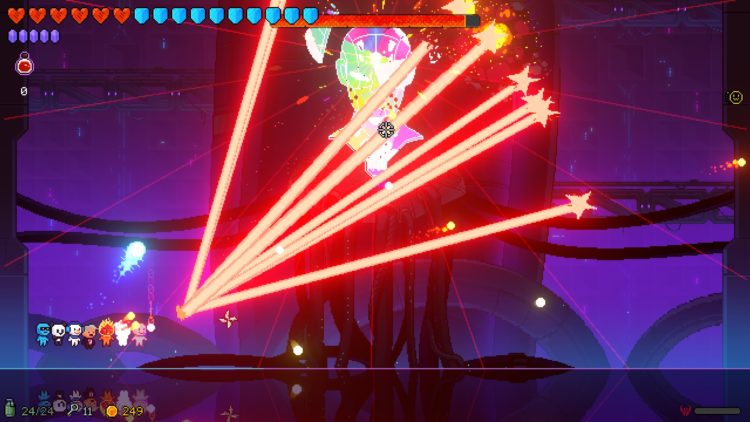 An invincible soldier against a harmless God.

Emerging from the depths

I’ve never had much luck with the subgenre, but Neon Abyss was my saving grace. Perhaps it throws its players a treat too many, but the emphasis on thriving over surviving is a breath of fresh air. Neon Abyss might not be good for as many runs as other roguelikes and rogue-lites, but each trip into the abyss packs a whole lot more punch.

Neon Abyss’ emphasis on thriving, not surviving is a breath of fresh air in a subgenre defined by struggle. It’s chaotic, cathartic gameplay is a welcome surprise and unique take on the formula.