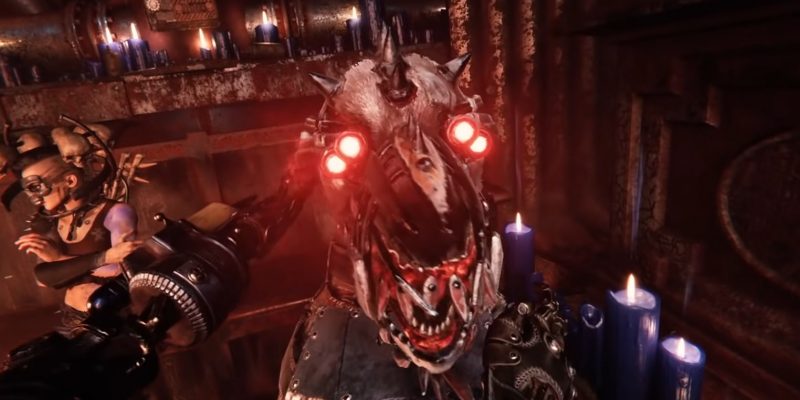 The world of Necromunda: Hired Gun isn’t one for the faint of heart. Crime, corruption, and enough jagged metal to guarantee a bout of tetanus populate its grim world. You won’t have many friends, but there is one in your circle that will always be loyal. The game’s latest trailer introduces you to the people and factions that call Necromunda home. Oh, and it also offers a glimpse of your pet cyber-mastiff, who’s such a good boy despite having a face that looks like someone dropped a red glowstick in a blender. Such a good boy.

In Necromunda: Hired Gun, your home away from home is the Martyr’s End. Here is where all your “business” is conducted. Contracts, information, and, of course, booze flows from the place. The Necromunda: Hired Gun trailer today shows off the hub, introducing you to characters like the bounty hunter who saved your life: Kal Jericho. You also meet the barmaid, from whom you get your info.

Mostly, though, the trailer is all about the action. Necromunda: Hired Gun looks like the kind of game that won’t shy away from ridiculous violence. Naturally, your dog will get in on the action. As your partner, the mastiff with the heart of gold (or possibly silicone) can be sicced on enemies. For fetching enemy throats, you can give him treats or pats. Preferably both. The trailer also goes into the myriad of enemies you’d face. It’s not just your standard murderers, either. Enforcers, cults, and the Inquisition fill out the 40K party roster.

Necromunda: Hired Gun is a first-person shooter set in the Warhammer 40,000 universe. You can upgrade your skills and talents, and use a role-playing system to level up. The game is set to release on June 1 for PC via Steam.

Atelier Sophie: The Alchemist of the Mysterious Book DX — Is it worth it?