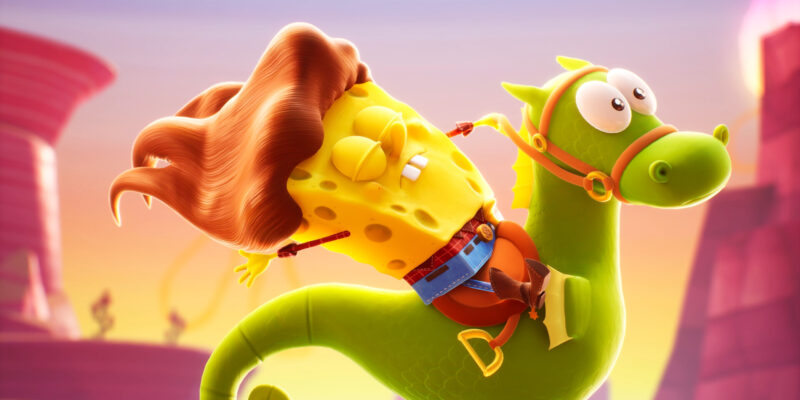 The gist of this new SpongeBob game will feel about right for anyone who has seen the show. SpongeBob and his buddy Patrick (who is not the Krusty Krab, so stop asking) have screwed something up. After being handed the power of wish-granting Mermaid Tears, they somehow shatter the universe. Portals send our two heroes across multiple Wishworlds with cowboys and pirates, and some carry a theme like the past or Halloween. There are seven worlds in total, and one of them contains a Kill Bill reference. I’m sure the kids will get that. Patrick comes along, but I think he’s been turned into a balloon. That tracks.

“SpongeBob and Patrick meet the mysterious fortune teller Kassandra who gives them a vial full of Mermaid’s Tears©,” reads the game’s description. “Legend claims they grant the wishes of those who are pure of heart. Naturally, the two best buddies get overexcited and their flurry of wishes tears open the very fabric of space and time. All while releasing Cosmic Jelly© onto Bikini Bottom and opening portals to strange Wishworlds in the process. Now it’s up to our heroes to rescue their friends who got lost in the Wishworlds and bring back Bikini Bottom’s most iconic buildings. But Kassandra has her own devious plan.”

The new SpongeBob game should be attractive to fans of the show. It’ll bring back all the original voice actors, and include 101 songs. Naturally, that means “Sweet Victory.” No gameplay has been shown yet, but by the look of the trailer, each world will give SpongeBob his own costume with each world. Likely, he’ll be able to use some kind of world-specific ability or another.

SpongeBob SquarePants: The Cosmic Shake doesn’t have a release date yet, but its Steam page is already live with more info.