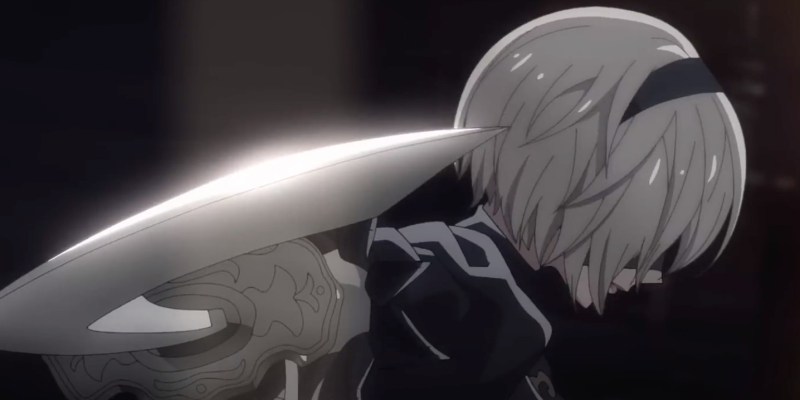 Earlier this year, news came out that an anime adaptation of the critically acclaimed NieR: Automata had entered production. At the time, we only received a small bit of concept art and a few details about the plot, so the overall direction of the anime remained a mystery. Fortunately, producer Aniplex uploaded a lengthy video that included a good amount of detail about the series and what the creators want to achieve. On top of that, we now know that the NieR: Automata anime will officially premiere in January 2023.

This video goes beyond showing concept art and presents a few clips of the anime in action. Although the footage mostly features 2D animation, it also incorporates 3D modeling in a few areas, such as with Pod 042 and some of the backgrounds. Many of the shots shown directly parallel some of the ones featured in the game, which diehard fans of NieR: Automata will no doubt notice. Additionally, the footage names some of the voice actors performing for the Japanese version, including Yui Ishikawa as 2B and Natsuki Hanae as 9S.

A new look into the creators’ thought processes

The video also includes an off-camera conversation with Yoko Taro, the director of the game, and Ryoji Masuyama, the director of the anime. Notably, Yoko stated that he wanted the anime to deviate from the game in certain ways, as several aspects of the original work were made with the gaming medium in mind. Masuyama, on the other hand, wanted to stick closely to the original story and script to please fans. Yoko, the producers at Aniplex, and the anime staff debated over the series’ direction for a while, but Yoko’s vision won out. Said story changes are why the anime includes the affix “Ver 1.1a” in the title.

Ishikawa and Hanae also make an appearance in the video, where they discuss their feelings on the series and react to some official artwork. Both actors expressed excitement over the anime, as they fell in love with NieR: Automata and the story it told. In particular, Hanae followed the series ever since the release of NieR: Replicant in Japan, and he even played Drakengard. Hanae also noted that he’s curious and even a little bit uneasy about how the anime will translate some of the game’s more distinctive aspects.

Far from a cynical effort

Yoko did his best to reassure fans who worry when creators of an adaptation disregard the source material, stating this will not be a concern here. He noted that Masuyama and the anime staff have a deep respect for NieR: Automata, and if the anime ends up disappointing upon release, fans can probably blame him due to the changes he made. Everyone featured in the video certainly made their passion for NieR: Automata evident. So it’ll especially be interesting to see how Yoko will surprise fans with his story alterations.