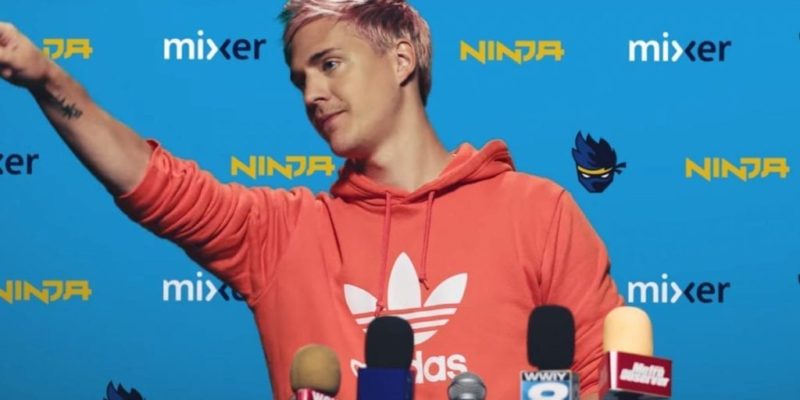 Prolific streamer Tyler “Ninja” Blevins has announced that he has signed an exclusivity deal with Microsoft to stream on Mixer in the future. Once the most popular force on Twitch, Blevins has decided he wants to get back to basics with his streaming roots and rebuild a new community that isn’t focused solely on Fortnite.

In a short video about the move, Blevins says, “I know this may come as a shock to many of you, but as of today, I will be streaming exclusively on Mixer. I feel like this is a really good chance to get back in touch with my roots and really remember why I fell in love with streaming in the first place.”

While Mixer isn’t exactly a new service, Microsoft has been making a push to increase its prominence for the last two years. Twitch has almost become synonymous with streaming, and Ninja was the largest individual channel on the service. After taking a short hiatus last year, Ninja streamed with rapper Drake and broke the concurrent Twitch viewer record handily. He routinely pulls in massive numbers and reportedly earns millions for his efforts. EA even paid the man $1 million to stream the reveal of Apex Legends earlier this year.

While Blevins gave a very PR-friendly answer for the move, the real reason likely has to do with how limited Twitch can be. While all of the features are there to create something unique, viewers tend to stick with a single game while watching streamers on the platform. The most growth comes from successively doing the same game, hence why Blevins stuck with Fortnite. Either because of Microsoft’s money or just lesser visibility on the platform, Mixer should let Blevins stream a wider variety of titles in the future. That is probably what pushed him into making the jump.

With a book deal in the works and Blevins already having a massive fortune, it likely doesn’t matter where he goes. I wouldn’t expect to see Mixer explode overnight, but this will only be a good thing for Microsoft going forward.

Stygian: Reign of the Old Ones is a Lovecraftian CRPG with hand-drawn art