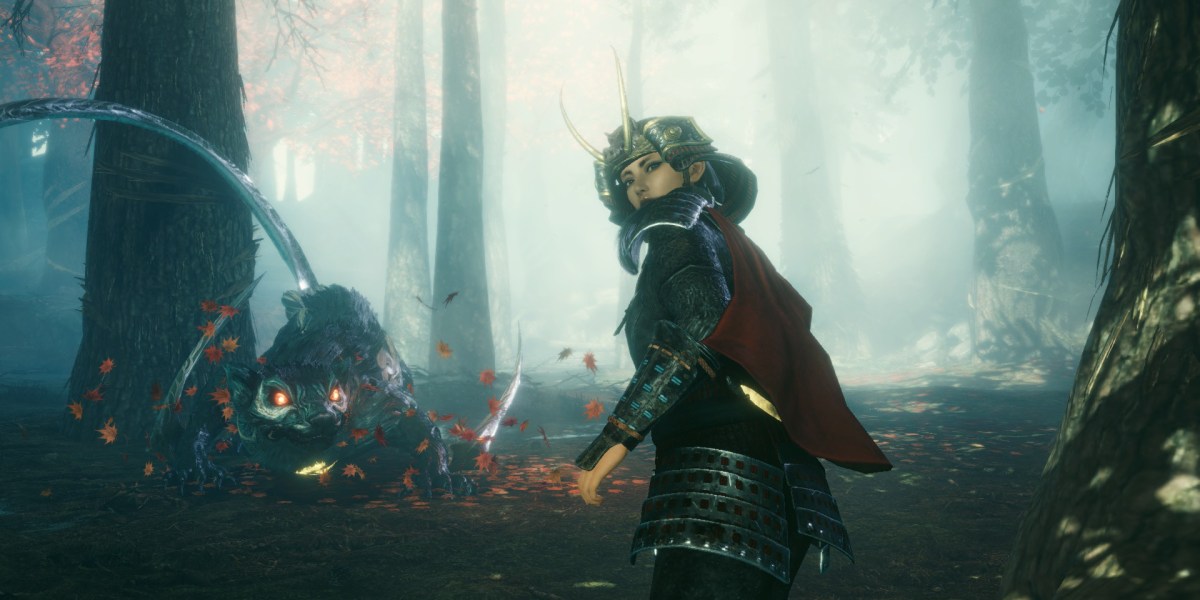 Generally speaking, I enjoy Souls-likes. The toughest one I have played was Sekiro: Shadows Die Twice. I found it to be exceptionally difficult, albeit typically fair — save for the last boss battle. As a whole, I’d use “exceptionally difficult, but fair” to describe what the subgenre aims for. But Nioh 2 wants to take things to new places and throws fair out the fucking window. If I tried to write a normal review of the game, it’d be 2,500 words and I’d break down all of the gameplay mechanics and describe my feelings about all of them. The game already has 91 reviews on Metacritic, so I’m not going to do that. It’s worth mentioning that I didn’t play the first game, so maybe I would have been less flabbergasted had I done so.

To put it simply, Nioh 2 is a remarkable game with a massive amount of depth and deeply rewarding mechanics. You can pick between a lot of different weapons. Each one grants skill points as they are used, with which you fill the weapon’s unique skill tree. Individual weapons gain familiarity with time as well. Then there are multiple other skill trees, which you fill as you master various skills. There are also trees for magic, ninja items, samurai techniques, and one governing special abilities. But the game is also bullshit. I don’t mean that in an “I’m whining because I suck” kind of way. I’m not saying I’m great at the game. Nioh 2 hates you.

Nioh 2 delights itself in finding ways to flatten your corpse into the dirt like roadkill. Souls-likes are largely known for having enemies that do massive amounts of damage, requiring players to navigate battles carefully. This game is more like a guy who randomly shoves you over while walking down the street. The enemies here are faster and more aggressive than I can recall seeing in any other game. Almost all of them, down to the weakest creatures, can murder you in just a couple of hits.

And the thing that gets my blood boiling more than anything else is the grabs. Every enemy has a grab. Many of these grabs will kill you if you’re not at full health. Some of them will kill you even if you do have full health. There’s a sound accompanied by a visual effect that indicates that an enemy is about to gank the ever-loving crap out of you, but the fact remains: anything can and will wreck your shit at a moment’s notice. There are also ranged enemies that can kill you in a few hits, and they’re scattered all over. One mission was going well until I died from getting hit by two flaming arrows simultaneously. 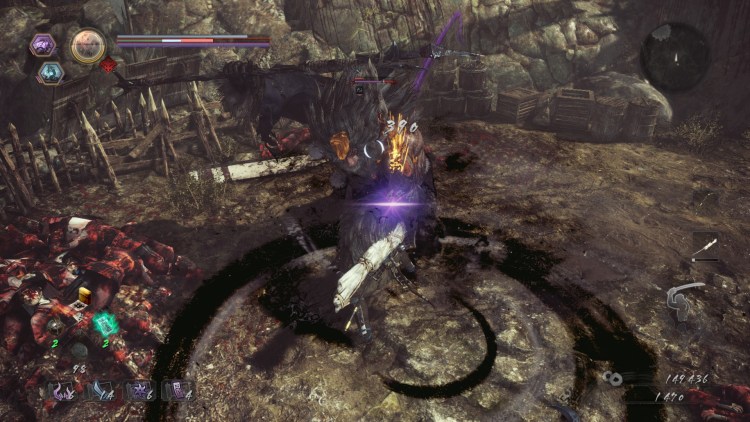 Granted, this may be intriguing to a lot of Souls-like players. Dedicated fans have beaten similar games repeatedly, and likely desire something tougher to sink their teeth into. I get that. But I found Nioh 2 to often be excruciating to play. Just barely doable, but excruciating all the same. It’s hard to overstate the immense frustration of losing tens of thousands of amrita  — the currency for killing enemies. And all because I didn’t realize that an enemy will spam grabs repeatedly. It took a lot out of me. After this game, I don’t want to look at one more title that continues to use the “drop all your experience points when you die” system. I’m officially sick of it.

On the other hand, Nioh 2 has some of the best mechanics you’ll find in any action game. The controls are wonderfully responsive, and there’s a shocking amount of nuance to how you can set your techniques. Every weapon has three stances — high, medium, and low — that function as different basic move sets. You can set different types of moves to each stance, and they’re all good for various situations. When dealing with human enemies, I liked to approach in medium stance and parry them with my ōdachi to toss them on their back. Then, I’d immediately switch to high stance and hit them with a powerful combo that often severed their heads from their necks.

Then there are the Yōkai. I hate Yōkai. They’re often huge, grotesque demons, and Nioh 2 loves to place them in tight areas. The game wants you to block more than dodge, but that doesn’t do a lot of good when the camera is so close that you can’t see a thing. The way the camera works often reminded me of the initial release of Demon’s Souls. It hates to be near walls, and will gladly make it borderline impossible to see what you’re doing, choosing to instead zoom into objects at weird angles. It also does that annoying thing where it points downward as you get closer to your enemy while locked on. I died so many times simply from not being able to see what I was doing. 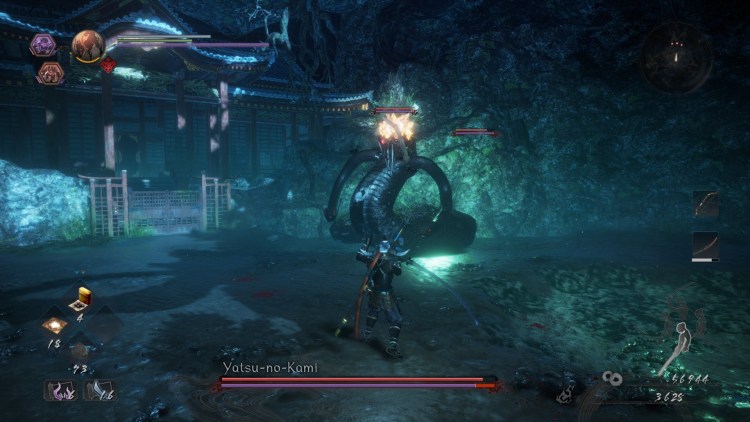 Your soul’s on fire

However, that’s not the only way Nioh 2 wants to blind you. You’ll often have to go into the Yōkai realm, where almost all color fades away. I have eye problems, so it’s probable that I have more trouble with this than many would. But I often had a lot of issues with focusing and distinguishing certain things within these areas. An enemy would be doing something and they’d blend into the scenery due to the lack of color and shimmery visuals while within these zones. And it doesn’t help that the game is obsessed with throwing wrenches in your stamina regeneration. Yes, all Souls-likes make use of a stamina system where you need to carefully decide on your actions, lest you be left without any stamina at all and leaving you vulnerable.

Blocking attacks in Nioh 2 does enormous amounts of stamina drain, especially against Yōkai. And they also love to leave black circles called Yōkai realms that will greatly slow your stamina regeneration down as long as you’re in them. You can get rid of them with a Ki pulse, which is a handy move that refills a good amount of stamina if you time a button press correctly. But then they’ll just put down more. And the enemies are so repetitive. The first five times I fought an Enki, I was impressed; the next 25 bored me. And, even though the game has a good-sized bestiary, the frequency with which it trots out these spongey mini-boss-type enemies is exhausting. Especially when you’re always one slight mistake away from death. 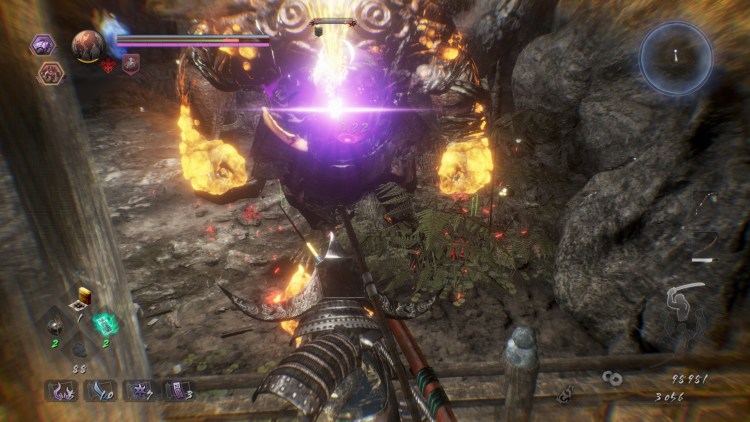 And the healing! Nioh 2 is divided into multiple regions and, whenever you make it to a new one, the default number of elixirs that refill upon death is always at three. You need to find little green spirits called kodama throughout regions in order to spawn with more elixirs. This means that you’ll often go into areas that aren’t any easier than the previous region’s, only to have way fewer healing items unless you want to dip into your stock that gets used permanently.

The game’s difficulty also isn’t even consistent. You’ll go through missions that aren’t too bad, only to have to fight a boss that takes an hour or more of practice to best. Then you might go through a nightmare of a mission that has a shockingly easy boss battle. The difficulty is like a rollercoaster, where it goes from fairly tough to “what did I do to deserve this” at the drop of a hat. Thankfully, you can still cheese things due to how hilariously dated the AI behaves in regards to pathfinding. Look, I beat a giant Yōkai just because it got confused by my standing on the outer walkway of a shrine! He couldn’t hit me!

I won’t deny that Nioh 2 is an outstanding game in a lot of ways. It has top-tier combat, an insane amount of depth, and a varied, interesting bestiary to face off against. But it’s also cheap, repetitive, and obnoxious a lot of the time. There’s even randomized loot. And you’re expected to replay missions to farm for crafting ingredients. On PC via Steam, you’re given the complete edition, which adds in the game’s three DLCs. Your $50 USD purchase will easily net you over 100 hours of play. There’s a lot of meat here if you don’t mind fighting the same huge enemies again and again in the same cramped locations.

In the end, it comes down to whether or not you like Nioh 2‘s brand of punishment. Some people will love going to pick up an item, only to get insta-killed when an enemy drops and immediately grabs them. They might love fighting overly spongey bosses that can randomly drop your stamina regeneration and kill you with a lucky grab. Say what you want about bullshit, but it does keep you on your toes. I just don’t have much of a stomach for it, and I wish the game itself didn’t look and feel so dated. Stop with the 2010-ass cameras, Japan. It’s been a decade. Move on. 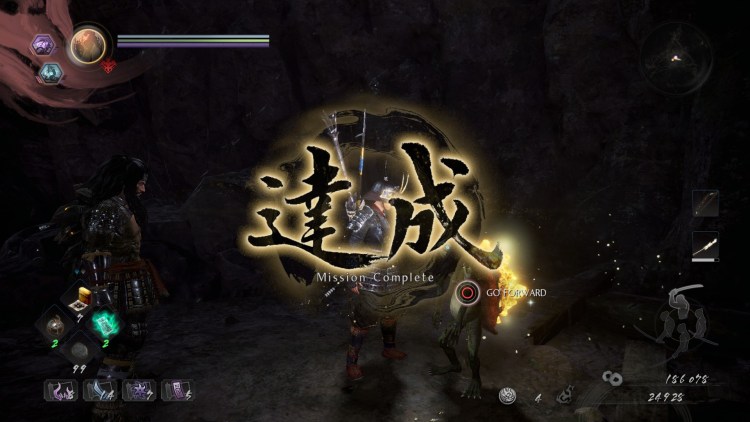 As great as it is frustrating, Nioh 2 will resonate more with people who like the thrill of constantly dying suddenly. The game is brutal, the camera kind of sucks, and a lot of the enemies get old fast. But it's also got extraordinary depth and a bevy of complicated systems that offers players plenty to dig into.

Werewolf: The Apocalypse – Earthblood — Helping Yfen with the spirits