In response to a flurry of refund activity on No Man’s Sky this weekend, Steam has updated the game’s page with a notice that may put an end to some of the claims.

Above the purchasing option for the game on Steam, there is now a unique notice (at least, I’ve never seen anything like this before on the platform) which reads: “The standard Steam refund policy applies to No Man’s Sky. There are no special exemptions available. Click here for more detail on the Steam refund policy.”

This extra note appeared at some point during Sunday. Players had previously reported success with requesting refunds via Steam’s support ticket system, even if they had played beyond the usual two hour window. Valve, perhaps in response to a high volume of refund requests, now appear to have reversed that leniency. Technical issues, missing features, and misleading advertising (the Steam page itself still features a trailer containing things not in the game) have all been cited by dissatisfied players as reasons for requesting their money back.

That doesn’t necessarily mean you should give up all hope for a refund on No Man’s Sky, but it does seem as if Steam will be taking a harder line against requests outside of the ‘standard’ two hours played and owned for fewer than 14 days model. 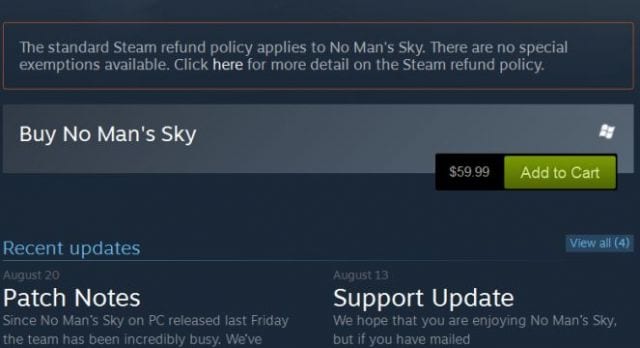