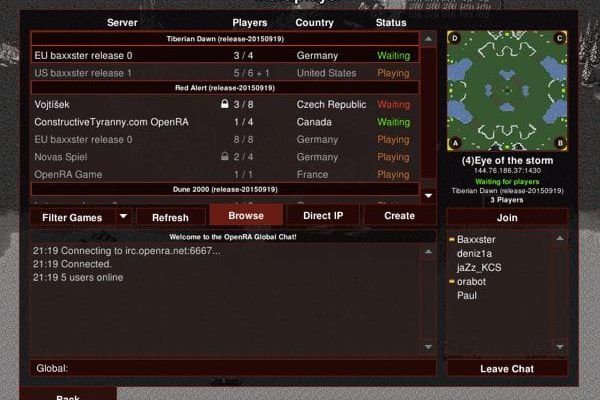 OpenRA is a brilliant service for fans of the early C&C and Dune games and they’ve just released a major update to all the games and the matchmaking system.

OpenRA now comes with a global chat channel which shared across all games which means players can now arrange matches and chat without joining the servers. To accommodate the changes the in-game server browser and skirmish lobbies have also been updated.

One of the best new features that’s been added is a speed selector. Players of the original games will remember being able to slide the game speed up or down and it was a feature that was sadly missing from OpenRA.

Another gameplay mechanic that’s been changed is that all units default to a defend stance now which should keep any rogue units in check. The OpenRA version of Red Alert  has received a stack of balancing changes and there’s five new missions for the Soviet campaign.

OpenRA has just got better and a full list of changes can be found in the lengthy change log.

It’s fantastic what the OpenRA team has achieved, these early C&C games are still some of the best RTS games ever created. If you’ve not tried OpenRA then you’re missing out.

Rise of the Tomb Raider exploring PCs in January