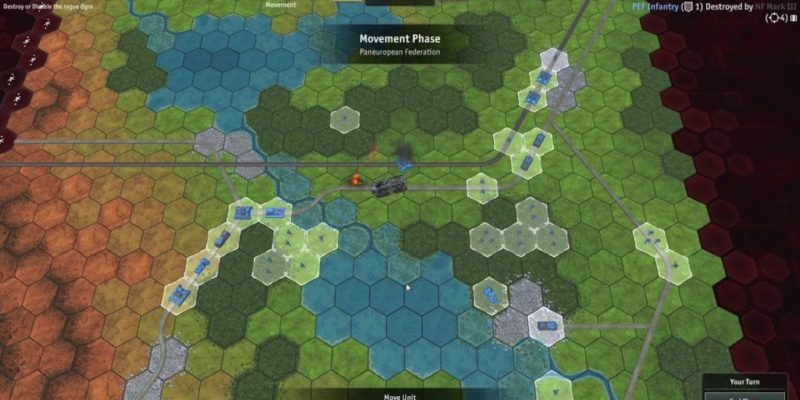 Steve Jackson is a famous name in the world of tabletop games, and Ogre is one of his 1980s creations. To eliminate some possible early confusion, this is the US Steve Jackson we’re talking about. Not the UK Steve Jackson associated with Games Workshop and the Sorcery! series.

There’s plenty of overlap in their work (the American Steve Jackson did write some Fighting Fantasy books too), but historians are fairly confident that they are different people. Anyway, with that said, Ogre is a game about gigantic, AI-controlled battle tanks in a far-future that is, predictably, not great to live in for the average citizen.

In this video, I take a look at the first campaign mission in the game. My scattered forces are up against a rogue Ogre tank, whose AI has gone bonkers and is now indiscriminately firing at things. Not an ideal situation, really. It has to be stopped, and only the local military units stand in its way.

As you’ll see from the footage, Ogre is a turn-based title with hex grid movement. Terrain plays an important role (not so much in this mission, but in general), and certain special units can do things like move after firing. The game can be played with either ‘Classic’ or ‘Advanced’ rulesets (with the campaign using Advanced). It also has multiplayer modes, for those who want to take on fellow AI tank enthusiasts online.

Star Wars: Battlefront 2 Starfighter Assault is no XvT but it’s not bad