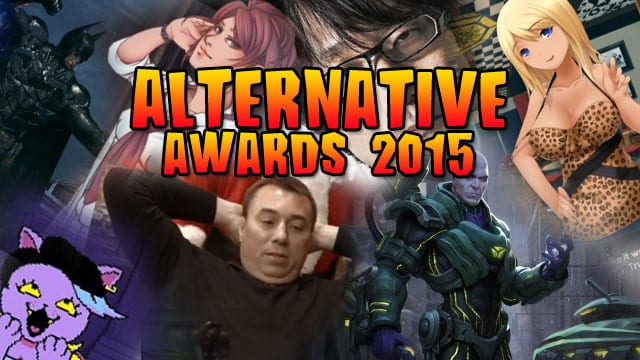 Most Blatant PR Lie: “Kojima’s just on holiday, everyone!”

Paul: I hope Kojima had a wonderful “holiday” soaking up some sun, lying on a beach. Oh wait! It was all bullshit.

Tim: I suppose it depends on your specific interpretation of the word holiday. “He’s not currently doing any work for Konami and he’s not here and we’re not paying him” could sort of be construed as a holiday, I guess. Or, uh… does gardening leave constitute a holiday? Hm.

Game Most Likely To Induce Melissophobia: Thea: The Awakening 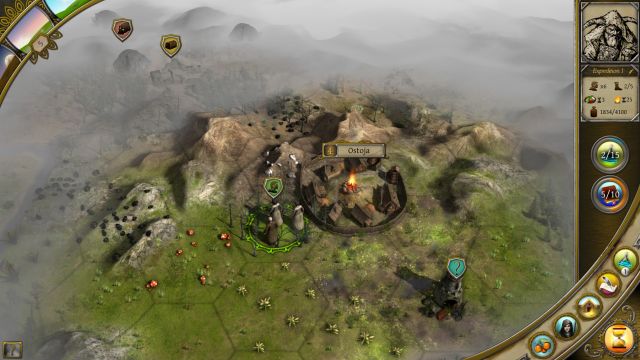 Tim: Thea: The Awakening wasn’t exactly in my shortlist for Best Games of 2015, but in terms of the amount of weird stuff it tries, it’s probably up there for Most Interesting. That’s not why it’s here, though. It’s here because of its fucking bees.

Thea‘s battles play out in the form of a card game, where you and your opponent take turns plonking down cards, each of which represent one of your characters. Once you’re both done placing cards, there are two rounds of the cards fighting it out according to the rules for whatever weapon they’re using (with first-placed cards going first), and then if there’s no clear victor, you reshuffle and place cards again. There’s more to it than that, obviously, but that’s a decent capsule explanation.

Bees are one of the game’s enemy types, along with spiders and orcs and undead and so on. There are two problems with bees: first, they attack in massive swarms of about 20 cards. Second, they all inflict Piercing damage. Why is this a problem? Because Piercing cards, when placed, are placed behind the most recently played opposing card (so they’ll attack before it), and they inflict half of their damage on it when they’re placed. Chances are you’ll lose a few people before you even get to the combat phase. You could just pass continually and plonk down all your cards at the end… but that means you’ve got a swarm of 15 bees hitting you in the face before you get an attack off. I have more casualties when battling low-level bee swarms than I do when taking on fucking dragons. Fuck bees. 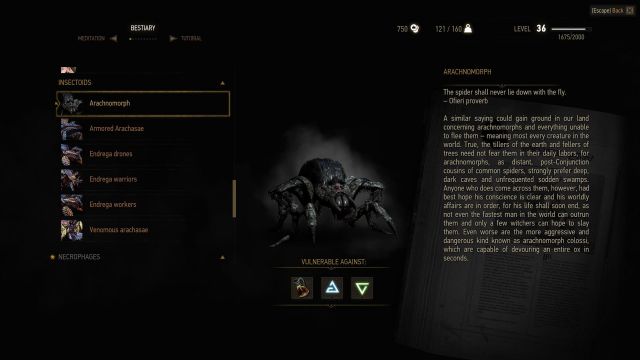 Tim: On a similar theme, you know what was great about The Witcher 3: Wild Hunt? No, I don’t mean that. Or that. No, not that either. No, it’s– look, yes, okay, there were lots of great things about the game. But I’m referring to– look, shush, stop going on about it. It’s a great game. We know this. Shush. The specific thing I’m talking about here is that it was a fantasy RPG with no sodding spiders. At least, none that I encountered.

Yeah, okay, there were Arachas, but they struck me as being more like giant armour-plated scorpions than spiders. And there was that one side-quest in Skellige which had a web-filled cave and a very spider-like Arachas. But for the most part? No spiders.

Enter Hearts of Stone, the (so far wonderful) first expansion for The Witcher 3, which I’ve been playing around with. While tootling along with the main quest, enjoying all sorts of excellent new characters and clever objectives, I suddenly found myself literally dropped into a pit of spiders. Well, “arachnomorphs”, but from what little I could see by the dim cave light and the Igni flames, they were big and hairy and terrifying.

No, I didn’t pull out a torch. No, I didn’t use a Cat potion to see better. I don’t want to see giant spiders. I’m hoping that this is their one and only appearance in the DLC, and I’m hoping that I’m actually wrong and they aren’t particularly spider-like, but I’m not placing any bets on that.

For making an arachnophobe like me lower my guard and then literally dropping me into spiders, Hearts of Stone “wins” this award, which I’ve taken to casually calling the Fuck You Award.

(As an aside, The Witcher 3 is sufficiently massive that they may have been in the base game, but I didn’t find any. Conversely, Hearts of Stone has thrown them at me twice in the main quest alone, so far.) 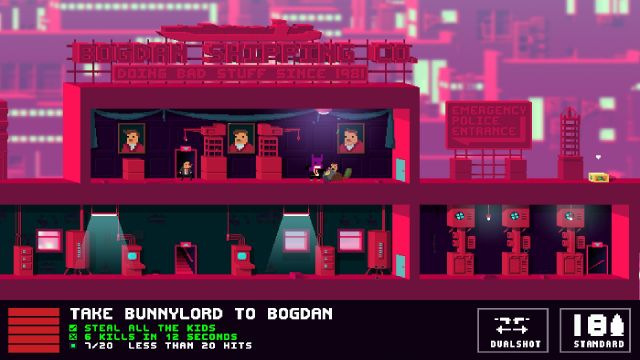 Tim: Alas, Hotline Miami 2 turned out to be considerably weaker than its predecessor. Hooray for Not A Hero, then, a balls-out platform violence-’em-up that demands fast reaction times, quick thinking, a degree of memorisation, multiple characters to try out, the ability to die incredibly fast, and a whole lot of gore. And also a very, very silly plot about a bunny from the future trying to get elected Prime Minister to stop an unspecified apocalypse. By murdering people.

It’s not a particularly short game, and it’s got its fair share of irritations, but it’s a pretty good sign when I finish a game and immediately wish there were more levels. 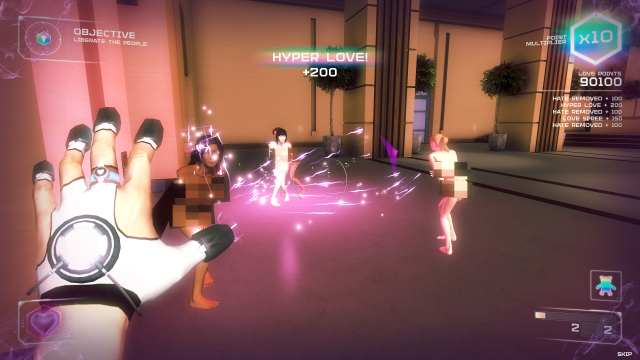 Peter: Admittedly, there aren’t too many games where you see the characters’ underpants (not ones you can discuss in polite society, anyway). But that just makes this award all the more special. A bizarre promotional tie-in with Bjorn Borg-branded sportswear, First-Person Lover was a freebie flash game that tasked the player with spurting their hot love all over fascists (um, I think). Coincidentally, once the hate-mongers were loved up enough, they started dressing in Bjorn Borg gear. So in a way, you weren’t so much promoting world peace as the inevitable march of capitalism. Liberation through consumption. Of Bjorn Borg pants. 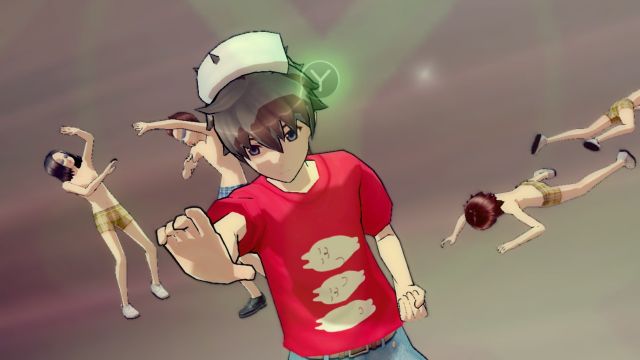 Tim: Meanwhile, Akiba’s Trip: Undead & Undressed also features a massive amount of videogame underpants. This quirky Japanese RPG brawler has you battling pseudo-vampires in Akihabara… by ripping off their clothes. Expose most of their skin to sunlight, and they’ll die! Or, if they’re human, they’ll just run away in shame.

Naturally, they’re also trying to do the same to you, so of course you can choose what type of underwear you fancy donning, and there are plenty of types of underwear on display from your foes, too. Best/worst of all, you can actually steal the underwear of your foes through finishing moves and Chain Strip combos… and then wear it. Which is actually kind of disgusting, now that I think about it. 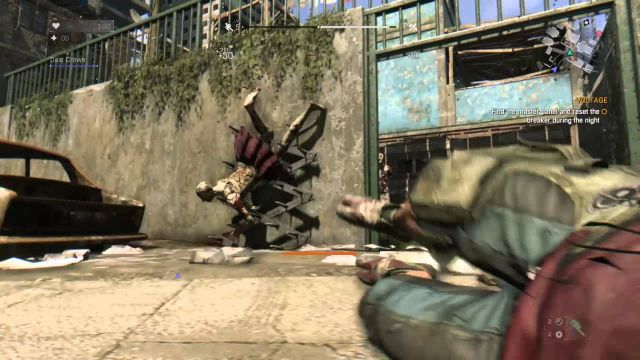 Tim: Dying Light is pretty great, but the best thing about it is without a doubt the dropkicks. Unlock dropkicks as soon as possible and then start leaping across the city, dropkicking zombies off rooftops. Dropkick them into environmental hazards. Dropkick them into hordes of their own kind. Dropkick everything. It’s sort of like Dark Messiah of Might & Magic‘s “kick” function in terms of physics-based entertainment, only with shitloads of zombies, and dropkicks. 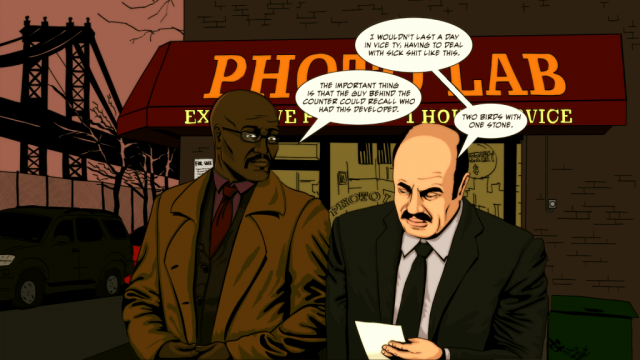 Peter: I must admit, I’ve not kept up with The Detail (which just means I haven’t played Episode 2). Tonally, the first part was quite weird. You (mostly) played a balding, barely-keeping-it-together detective disgusted at the way city cutbacks, new police procedures, and pesky rules like “don’t punch all the suspects in the face” were holding him back from doing his job. I could go and look up what the actual character is called, to remind myself, but I prefer to always think of him as Sipowicz in the middle of some kind of mental breakdown. 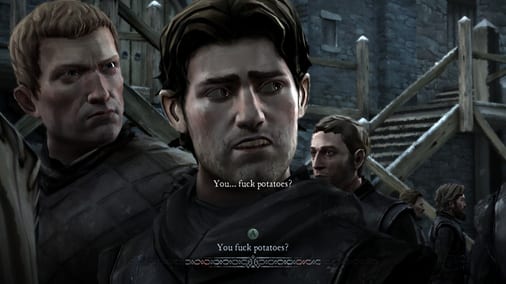 Peter: Telltale’s Game of Thrones ended up as an unwitting tribute to the current state of the Song of Ice and Fire novels: hours of build-up to multiple, unresolved strands of plot. Occasionally, though, the episodic game managed to nail a moment of absurd levity in the midst of Westeros’ usual dose of bleak horror.

Sent to the wall for killing a Whitehill soldier (in revenge for having his entire family killed), Gared Tuttle is gassing like a schoolkid during a boring assembly with his two new acquaintances Finn and Cotter. When asked why he’s been forced to join the Night’s Watch, Cotter mumbles something about “fuckin’ potatoes”. To its immense credit, the game gives you exactly the dialogue response you’d want as one of Gared’s options.

Tim: Still haven’t played this. Not kidding when I say that this is one of the primary reasons I want to give it a try, though.

Paul: Agreed. This is outstanding dialogue that even Bill Shakespeare would be proud of. 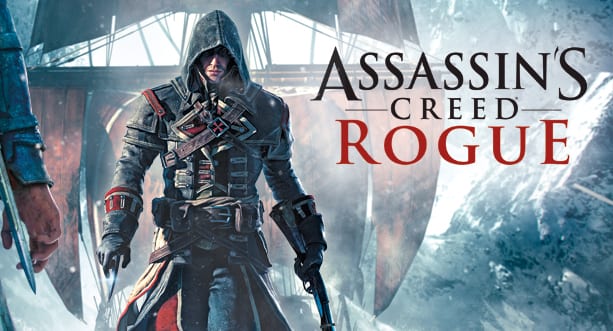 Peter: You’d think Hatoful Boyfriend might a coo-in for this award, but no.

In previous Assassin’s Creed games (Brotherhood, etc), pigeons had served as useful pick-up points for missions. You’d wander up to the coop, press an interact prompt, and get your stabbin’ instructions. Assassin’s Creed Rogue decided to make things a bit harder. Shay was a Templar traitor-man, so he had to intercept Assassin briefings by … stalking pigeons.

It’s hard to say how much turmoil Shay felt about leaving the Assassins, but you have to imagine that, when the prompt “Approach the pigeon slowly” appears on-screen, he’s thinking about whether he’s made the smartest life choices.

Tim: Honestly, this award just makes me think of Dick Dastardly and Stop the Pigeon. I can’t help but feel that Assassin’s Creed: Rogue would’ve been better received if you spent a lot of time using an improbable flying machine to try to catch a pigeon. 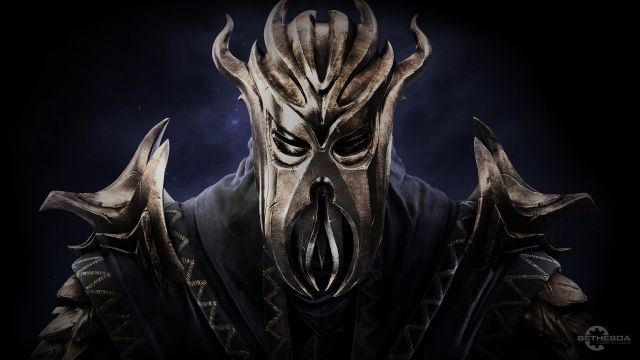 Paul: This was a very weird situation. In theory it wasn’t a bad idea – I mean, why shouldn’t mod makers make a few bucks for their efforts? The issue here was the way in which it appeared, out of the blue, and without much thought put into it. When they did backtrack, Valve’s statement of “We’ve done this because it’s clear we didn’t understand exactly what we were doing” said it all. Bethesda, on the other hand, would have loved to see this go ahead, and they attempted to justify such in their own blog post.

It was a mess with little thought going into copyright issues, mods that relied on other mods, and how cash could be split between mod authors. At least common sense prevailed and it was all reversed quite quickly.