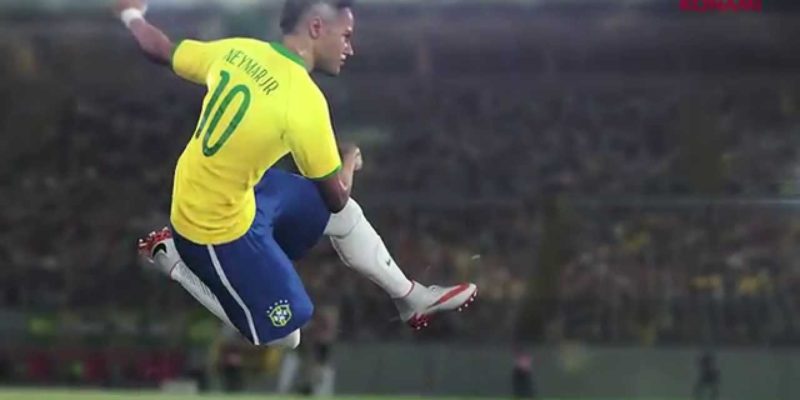 Konami have pushed out a whole load of PES 2016 details today, along with an E3 trailer and confirmation that the game will be released on 15-18 September (15th in the US, 18th in the UK).

Some of the most important information from a PC point of view, however, is not yet known. Last year’s port of PES 2015 was not up to the standard’s of the platform, and the PC demo was released extremely late. Time will tell whether PES 2016 improves on that state of affairs, or is another after-thought for the PC.

Metal Gear Solid V: Ground Zeroes was a solid PC release (and on the Fox Engine to boot,) so it’s not as if Konami can’t manage it when they really try.

Anyway, enough grousing about that (at least until more information is released.) Let’s see what PES 2016 is promising. For a start, they’ve secured the Champions League license for another three years – so you won’t see that popping up in FIFA any time soon.

Listed under Fresh Gameplay (mm, so fresh) are:

– Advanced Collision System: A “significantly improved” collision system, which should calculate a unique outcome depending on the type of impact. In other words, clattering into fragile, bird-boned strikers in spectacular style.

– Aerial Strength: With more physicality comes a greater need to jostle (with the left stick) for headers and find the right positions. FIFA is honestly pretty terrible at this, so maybe PES 2016 can model things a little more convincingly.

– 1v1 Control: Response times for tight, close control are said to be improved, along with upgraded feint moves to help you avoid the aforementioned physical clatterings. “Technique and timing can see a defender lose his balance,” it says here.

– Perfect Defence: Timing a tackle at the perfect moment will see your defender win the ball and shove the opposing player away, sparking a potentially rapid counter-attack.

– Goal Keeper ID: To add more “individuality” keepers will have varying stats in “Catching, Clearance, Collapsing and Deflecting.” Yes, the choice of ‘collapsing’ is quite funny. Anyway, this sounds … potentially fraught with peril, but we’ll see how it turns out eh?

– Celebration Control: You’ll now have “full control” over goal celebrations, which of course is excellent.

Now then, under Fundamental Changes we have this little collection of features:

– New Master League: The Master League is getting a “total revamp” this year, “Every element” is said to have been changed, “from the vibrant and involving menus to the new and exciting player transfer system.”

– New Visuals: Stuff like rain splashes, new turf textures, and other bits of fanciness courtesy of the Fox Engine.

– Dynamic Weather: A first for the series. It can now start raining during a game, which will obviously have an effect on ball control and the slickness of the surface and all that. Defenders taken on in 1v1 situations will be more likely to fall over on a wet pitch too.

– Human Motion: Good news, the players won’t walk like crabs. More seriously … PES 2016 is said to have a whole bunch of new animation sequences (three times as many as before,) to make things look as fluid as possible.

They say ‘myClub’ has been “further improved based on user feedback.” A new Dynamic Wide Camera Angle has been added as a pitch-viewing option. Peter Drury and Marco Hagemann are now on board the PES 2016 commentary team in the UK and Germany respectively.

That’s about it. Here’s the E3 trailer.