Beamdog’s latest Enhanced Edition has been revealed today as the acclaimed Planescape: Torment. To find out more about how the project was conceived, the involvement of original Lead Designer Chris Avellone, and the updated features present in the Enhanced Edition, I sent over some questions to Beamdog’s Project Lead, Alex Tomovic.

Here’s what he had to say about the joys and difficulties of getting Planescape: Torment ready for a 2017 re-release, and the emphatic desire to not change or add anything to the game’s celebrated story.

PC Invasion: How did this collaboration between Wizards of the Coast, Beamdog, and Chris Avellone first come about? Who made the first approach about an Enhanced Edition of Planescape: Torment?

Alex Tomovic: We are very thankful to Wizards of the Coast for allowing us to bring the timeless classic that is Planescape: Torment to modern devices and make it available to a wider audience. When Trent [Oster] and Cameron [Tofer] came to me with the idea for the Enhanced Edition, my very first thought was to contact Chris Avellone. As a huge fan of the original game, I felt very strongly that Chris needed to be involved right from the start. Fortunately, it all worked out and we are very happy to have Chris reprise his role as the Lead Designer for the Enhanced Edition. 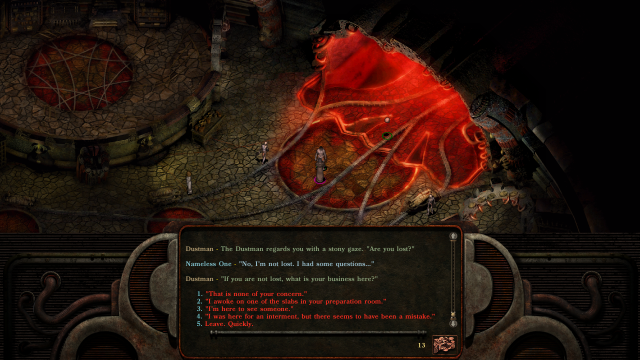 PCI: Were there any rights or licensing issues to sort out in order to make this happen?

AT: Not really. Wizards of the Coast have been very supportive of our efforts.

AT: The Enhanced Edition of Planescape: Torment features a native 4K user interface, remastered music, Steam achievements as well as a number of quality of life improvements such as quickloot, combat log, area zooming, journal searching and object highlighting. It runs flawlessly on modern devices and operating systems including the latest versions of Windows, macOS, Linux, iOS and Android.

PCI: When working with the older code, what was the most challenging new feature to implement?

AT: Planescape: Torment featured a number of unique spells with amazing visuals that were often linked to in-game cinematic sequences. Porting that spell system over to the new engine was definitively the most challenging part of the process and we are very satisfied with the end result.

PCI: Is there anything you wanted to include as a feature but were unable to do so?

AT: We didn’t have access to the source art for the original animated portraits and movies. Had that been the case, we would have loved to include higher resolution versions of both in the Enhanced Edition.

PCI: You were able to work with Chris Avellone on this release; do you recall any particular bugs or nagging gameplay issues that he was especially eager to fix after all this time?

AT: Chris requested to personally proofread all the text from the original game. This was something that he wanted to do for a long time and we were happy to oblige.

PCI: Was there any temptation, as you have done in the past with Enhanced Editions, to try to add new characters to Torment?

AT: None whatsoever. As the Project Lead of the Enhanced Edition, I felt that it would have been impossible to add new content to the game without changing its unique atmosphere and tone. I firmly believe that the story of Planescape: Torment stands strong on its own, which is why I focused the team’s efforts on making improvements to the technology behind the game, rather than making any changes to its content. 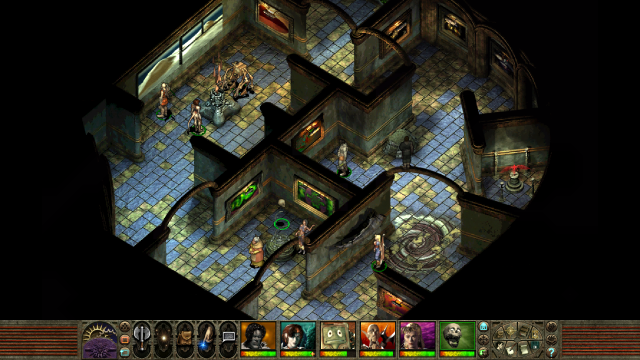 PCI: Regarding the remastered music – I know that with Grim Fandango, for example, DoubleFine had access to higher bitrate originals to use over the compressed in-game versions. Is that the case with Torment, or did you have to go in an ‘clean up’ older files? And was Mark Morgan involved at all?

AT: We had access to the original, uncompressed versions of the music tracks which were then used for the remastering process. Mark Morgan wasn’t involved directly, though we are very glad to have his music in our game at the best possible quality.

PCI: Of all the potential companions in the game, who is a ‘must-have’ for your own party?

AT: For me, that would be Dak’kon. Without spoiling anything, getting to *know* his story and seeing it unfold over the course of the game is an incredible experience. Not to mention that a multi-classed Fighter/Mage is very versatile in combat.

PCI: 2017 has turned out to be a pretty major year for the Torment name. Have you played any of inXile’s Tides of Numenera and, if so, what did you think?

AT: Sadly, I haven’t had a chance to play Tides of Numenera yet due to my busy schedule. I did back it via Kickstarter on day one and I intend to play through it when time permits.

PCI: With both Baldur’s Gate titles and now Torment in Enhanced Edition form, are they any other dream projects you’d like to see Beamdog to tackle next?

AT: Speaking purely for myself, I would love to work on something akin to the Gothic game series by Piranha Bytes.

By Kevin Carignan10 hours ago
Interviews

By Andrew Farrell7 days ago
Interviews