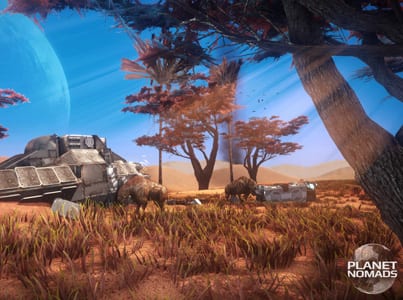 Planet Nomads has been kicking around for a while but it looks like the developer Craneballs are about ready to pull the trigger on a Kickstarter campaign for the sci-fi creation and survival title.

In Planet Nomads players crash land on an alien planet and will be challenged to survive and create vehicles with the end-game to build a ship for inter-planetary travel. It’s a procedurally generated sand-box experience where exploration is key but that’s only going to be possible through building and creating modes of transport.

Craneballs say they want to “gradually expand the game world and keep adding new content and mechanics into it” and they want to work closely with players to get feedback when the game eventually goes live.

There’s no release date for the game yet but we do know the Kickstarter gets underway in January and Steam Early Access is planned for Q1 of 2017.

Although the game is some way off from release, Craneballs has already released a building editor to demonstrate the “free building mode” with its vehicle creation which will give you a taste of what to expect.

Planet Nomads does look stunning with its vibrant visuals and any game that involves building and exploration usually does quite well. Watch the trailer below to get an idea of what’s to come and there’s some screenshots to enjoy below that.