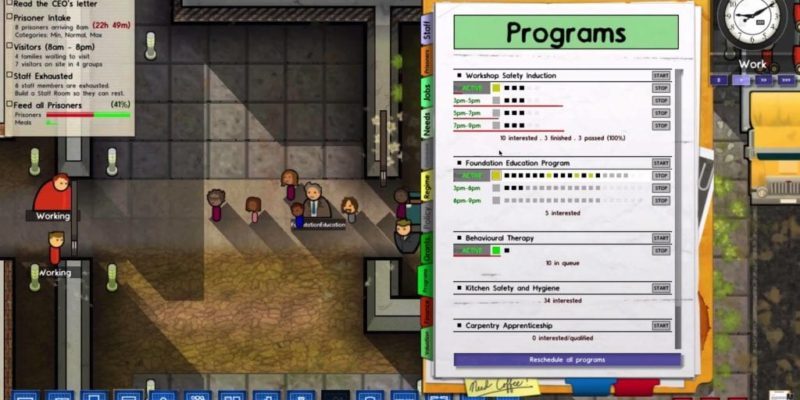 I still haven’t played much Prison Architect, but I’m thoroughly enjoying the lengthy videos released every time an alpha update comes out. It’s nice to see a game being iteratively designed like this. Speaking of which, Prison Architect Alpha 18 is now out, complete with a half-hour video explaining what’s new!

This time around, the big thing is that reform programmes are coming in. Rather than just locking up prisoners and keeping them under control, you can now make attempts to reform the buggers through a variety of programmes, ranging from basic education to behavioural therapy. Prisoners will also need to be educated before they’re allowed to work in your workshops, kitchens, etc. because letting maximum-security prisoners just stroll into a workshop and start using circular saws is a bit… odd. Bear in mind that different prisoners will have aptitudes for different types of education, though.

Oh, and trained prisoners will apparently be able to make higher-quality goods, but in the current alpha, said goods don’t actually do anything. The implication is that, in future, you’ll be able to use these goods to create more comfortable cells.

The other addition this time around builds on the armed guards of Alpha 17. You can now outfit guards with costly body armour which increases their defence but lowers their movement speed, as well as handing out tasers. Tasers are expensive weapons that immediately knock a prisoner unconscious, but they can only be used once. While powerful, then, they’re going to cost you a fortune in the long run if you keep resorting to them. The alpha currently contains the ability to roll out tasers to every guard in the prison – not just armed guards – but as this might be a bit “game-breaking”, that’s pretty much just for test purposes right now and may disappear in future.

Check out the video below to see and hear more in-depth thoughts on this particular update.

Carmageddon: Reincarnation will damage you on 27 March