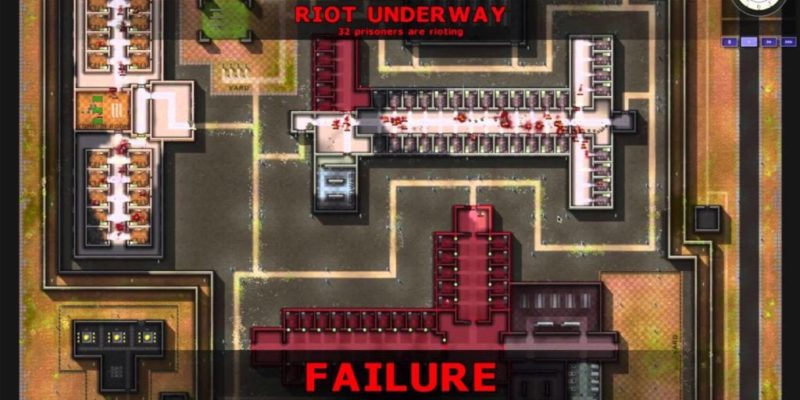 If this riot isn’t dealt with swiftly, the bosses are going to be unhappy with you.

Prison Architect alpha 20 is out and it adds in prison grading, reoffending rates, and fail-states.

Introversion apparently wanted to do something big for version 20, and that big thing is that you can now actually lose a game of Prison Architect. You’ll always get a warning first, and be given a time limit to rectify the situation, but if you don’t manage to keep everything afloat then you’re going to have to watch as bad things happen.

And I really do mean “watch”; you don’t just get a bog-standard game over screen. If a riot spirals out of control and you fail to retake your prison, you’ll have to watch as the National Guard steamroll in and retake the prison by force. If too many prisoners die under your watch, you’ll be charged with criminal negligence and will actually be put in your own prison (and yes, you can control yourself and walk around). Etc. Which is quite neat, and Introversion are apparently pondering expanding this a little bit more depending on how people find this.

(Personally, I’d love to see a Dwarf Fortress-esque mode which let you be a prisoner and either serve your time or try to escape, as a little extra. But then that’s just me.)

Additionally, your prison and prisoners are now graded. If you’re making attempts to rehabilitate people, this will be noted; likewise if you’re focusing more on terrifying punishments. Both of these will impact the reoffending rate of any given prisoner, and that reoffending rate is a very rough metric of your prison’s success. This’ll have more concrete uses in the future when things like parole are added, but for now, it’s just a rough sign of how well you’re doing.

Have a look at the video below to see all of these new features in action. The latest Prison Architect alpha is available for download from the usual places, if you’ve bought in.