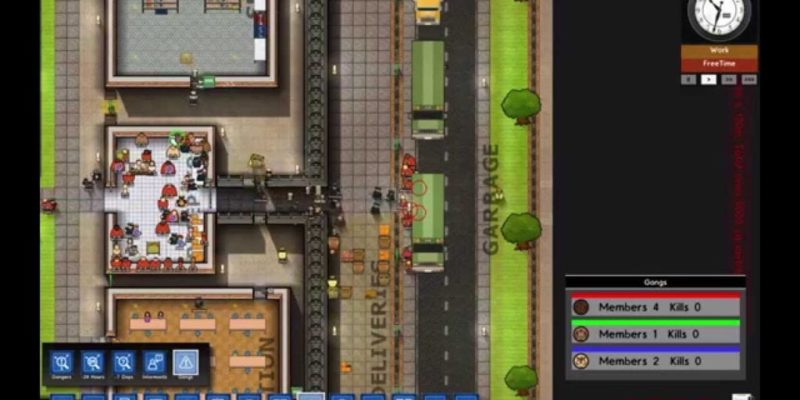 By “Asian character support” I mean text, by the way, not that you can now have Asian prisoners. While Prison Architect hasn’t been officially translated into Chinese, Japanese, Korean, or any other Asian languages, it now has support for the characters and so that stuff can be done in the future.

Prisoners now earn money for working and get given money by visitors, and can spend this cash in your commissary, helping you line your pockets by selling them vastly overpriced goods, all of which will impact their needs – snacks will hit their hunger, while things like soap will improve their hygiene.

Right now you can’t set prisoner wages or the prices in the commissary, but this will probably be added in the future. Having a commissary also adds a general net benefit in that it gives prisoners something to aspire to (in terms of “being able to buy stuff”), so they’re more likely to concentrate in training sessions for jobs.

And then there’s gangs, which is something that’s only partially been added because there’s a lot more to be done.

To quote the video, “Gangs fuck your prison. There’s no other way of saying it: they fuck your prison hard.” As such, if you want prison gangs, you’ll actually have to enable them via a checkbox when starting up your prison. If you enable this, then any new inmates in your prison have a chance of being affiliated with a gang, with maximum security prisoners being the most likely to be part of one. Right now, gang members will largely just stick up for each other – if one of them gets into a fight, then any nearby members of the same gang will join in to help out.

This already has large knock-on effects, though. An example given is that if a gang member gets pissed off with the conditions of the prison and trashes his cell in protest, a guard will attack him in an attempt to calm him down… at which point any members of that same gang will join in, jump the guard, and kick the shit out of him. Or if one gang member gets into a scuffle with a rival gang member in the yard, it’s quickly going to escalate into a full gang battle.

A lot more is planned for gangs, but the issue is that gangs are kind of an entity unto themselves, and right now all prisoners are just individuals. As such, it’s a new AI challenge to create a group of prisoners with a group mentality and group goals.

Prison Architect Alpha 34 is out now. As ever you can see the video for this alpha below, complete with some genuinely interesting ramblings about languages, real-life prison gangs, the economics behind prison shops and paid prison work, and more.