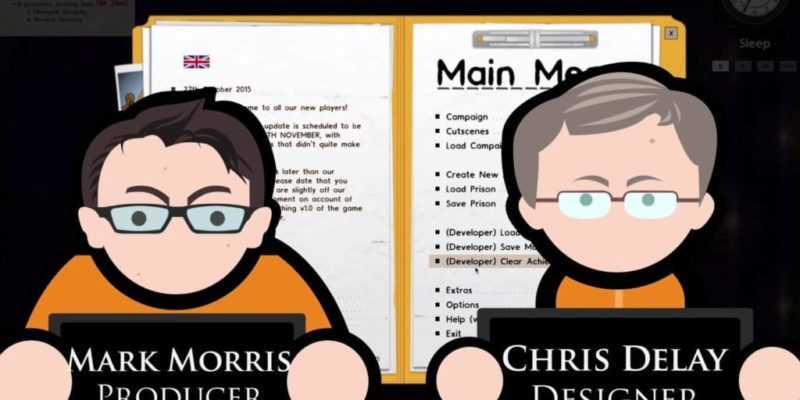 The first post-launch update for Prison Architect is upon us, bringing with it such joys as multiple occupancy cells and bunk beds.

And also lots of talk about depression due to completing a major project.

First up, though, is Escape Mode. I considered this more of a fun little addition than anything serious, but Prison Architect Update 1 has tweaked it pretty significantly, making it a bit less ludicrously unbalanced. Weapons now have ammunition, for instance, and you can only grab one shotgun or pistol or whatever per armoury. Not only that, but over time, the prison will re-hire murdered guards, repair destroyed equipment and walls, and so on. It won’t happen instantly, but it should now act as though… well, as though someone’s actually getting the prison back up to spec again. Acting as a prison architect, one might say.

Next up is a tweak to the Prisoner Intake system. Rather than being a “per day” thing, you can now set it up so that it will automatically fill any open occupancies in your prison. If your prison supports 50 prisoners, and you only have 35, you can click the “Fill Prison” button and it will bring in 15 in the next intake. If, a few days later, two of those are paroled, then you’ll get two more in the next intake. If you build another wing and add enough room for 10 more prisoners, 10 more will arrive. Etc. Or you can set an arbitrary number of prisoners you want, or…

Then there’s the ability to have multiple occupancy cells. Bunk beds are in now, which support multiple prisoners, but you can also set rooms as “Dormitories”, which support as many prisoners as you like. “Cell” will still only allow one prisoner – even if you have a bunk bed in there – but you can have a dormitory that only fits two people, or you can have a dormitory that fits dozens. Up to you.

Update 1 for Prison Architect is live now, and clocks in at about 80MB. The next update is due on 18 December, just before Christmas, and you can see the video for this one below.