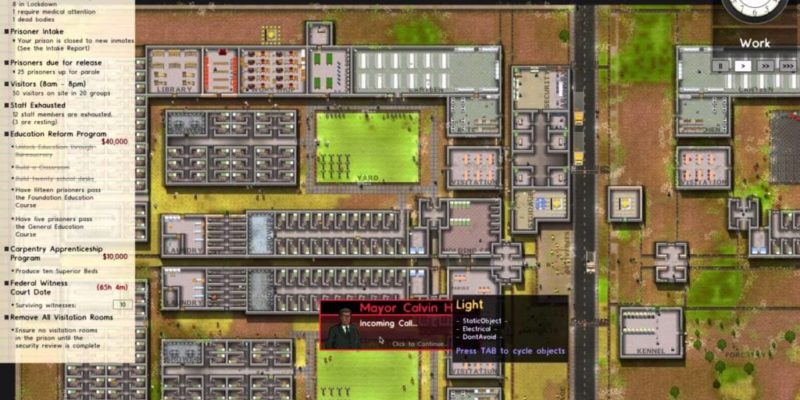 Hankies at the ready: the very final alpha update video for Prison Architect is here.

Well… okay, not quite. There’ll apparently be another video done live on stage from EGX, which’ll be livestreamed over the interwebs. And there’ll be more videos as the game continues getting updated after launch. But either way, this is the last alpha video (sort of).

The big thing this time is the random event system, described as “analogous to the SimCity random events system […] but not quite on the same scale as meteor showers.”

An example given is fire. Prison Architect supports fire, and has sprinkler systems, and fire engines, and whatnot – but fire never really happens. This system, though, will decide that maybe it’s time for a kitchen fire to spice things up; it works a bit like Left 4 Dead‘s AI director, in that it’ll kick things off when things are quiet rather than when you’re dealing with a riot. Of course, there are things you can do to mitigate these problems. Other than just buying sprinkler systems, events like power generator explosions will only occur if you’re stressing your power station to the maximum.

Or maybe the public will decide prisoners have too many amenities, and the mayor will be pressured into having you remove all TVs. Or maybe some of your inmates are federal witnesses for an upcoming court case, and there are going to be assassination attempts on them soon. Or…

As with gangs, this system can be disabled. It makes things a bit more difficult, but also a bit less predictable and a bit more interesting. One for the experienced players, really.