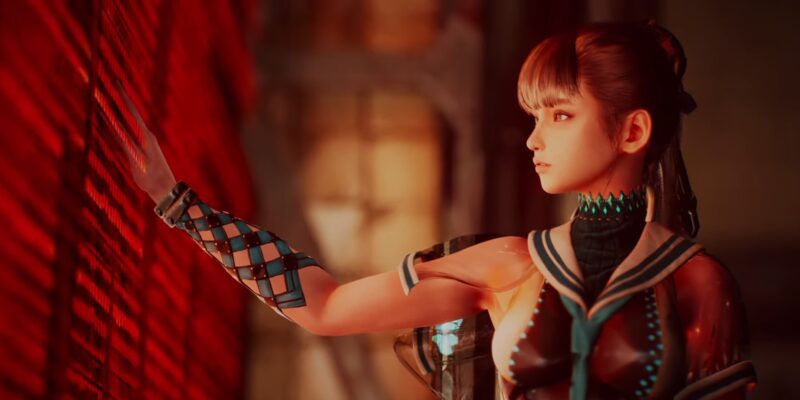 A new gameplay trailer dropped for the upcoming action game Project Eve, which looks like the lovechild between Devil May Cry, Bayonetta, and a little bit of Nier too. The trailer was released during the Playstation Showcase Livestream and showcases the swashbuckling gameplay we can expect from this new action adventure.

The game is developed by South Korean studio ShiftUp, best known for games like Destiny Child or Blade and Soul. The crispness and quality of the character and monster designs are no surprise, considering CEO Hyungtae Kim’s work as an artist and experience with other titles. It’s a ton of fun to look at, so let’s break it down.

Project Eve takes place on a dystopian Earth, where mankind no longer is welcome on the planet after losing to invaders known as NA:tives. You play as Eve, a survivor from a paratrooper squad deployed by the colony. Eve must fight her way through these enemies as she explores the newly ravaged planet.

Much of the action shown off in the game features the titular character Eve. We see her traversing her way through areas littered with gross monsters and robots. There’s tons of bloody, creature-slaying violence, as Eve mercilessly hacks and slashes past her foes. The combat looks graceful and plentiful, with tons of defensive and evasive maneuvers accompanying the monster-slaying action. Eve will grow stronger as the game progresses, acquiring new skills and weapons along the way. There are also quick-time events and dashing segments, such as when Eve slides down a tube while escaping from a monster.

We don’t have a release window for the game just yet, unfortunately. The trailer didn’t reveal a release date for the PlayStation 5, so naturally, a PC release is a ways off. For now, you can check out the trailer for Project Eve below: