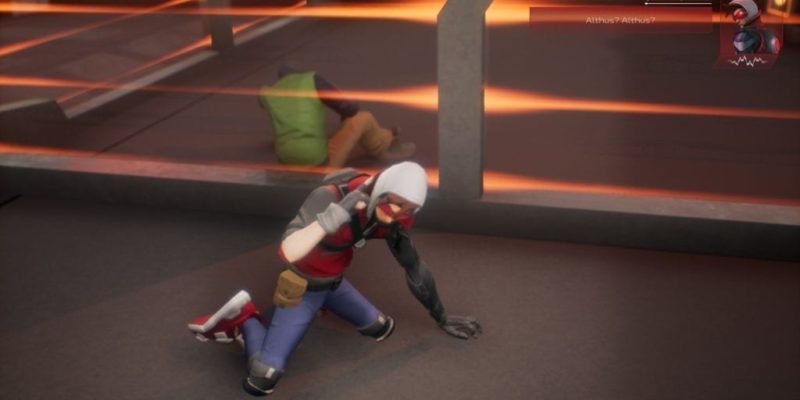 Stealth is a really hard genre to do really well. More often than not, most attempts seem to lean too heavily on trial-and-error. These tend to not have much to set themselves apart from the pack. While Quantum Replica might lean heavily on the former at times, its creativity and mechanics manage to make it a worthwhile genre entry overall.

The story is simple enough. You play as a character named Alpha who is helping a man named Alphus fight back against a fascist state. Along the way, there are twists and turns that shift the way we see the game as we know it. I’m being sarcastic — the story is extremely standard and very uninteresting. It’s presented with in-gameplay dialogue and really primitive, subpar cutscenes.

Suffice to say, Quantum Replica is not a game you play for the story. The voice acting is good enough, considering, and there are some interesting moments, but the plot is mostly perfunctory. Most of the time, when characters started talking, I just hoped for them to stop so I could get back to the sneaking. For the most part, the dialogue doesn’t tend to go on too long, thankfully, save for a ridiculous stretch before the last boss. But I’ll get to that later. 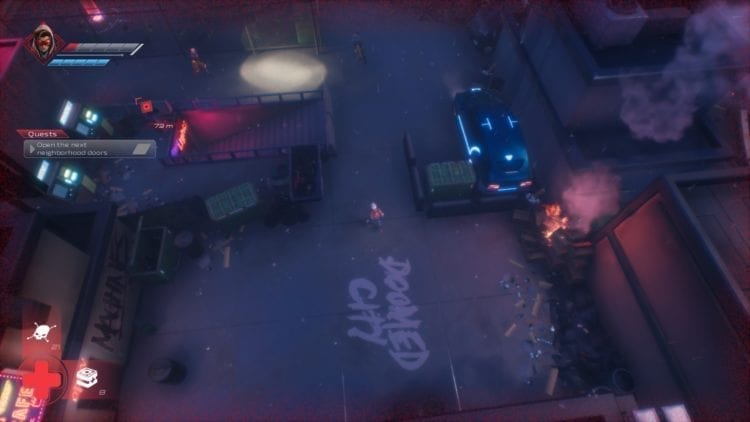 A destroyed city, eh? We’re off to a good start.

The Cutscene Jank Is Almost Charming

Visually, Quantum Replica is decent. It’s a 3D top-down game, with plenty of solid choices. The camera is fairly far from the action, but not too far. This is good because the game goes into close-ups during executions and cutscenes and it’s obvious how much detail the models lack. For instance, their mouths don’t move and the enemies are mostly all the same guy, with different helmets, hair, and beards plastered to the same head. I got some chuckles out of seeing the same enemy get his neck snapped for the hundredth time, only that time he had a really terrible beard.

The gameplay is fairly self-explanatory. As Alpha, you stay out of the enemy’s line of sight. You can choose to sneak past them, snap their necks, knock them out for a limited time, and do the same but with lethal and non-lethal ammo for your pistol. If enemy guards find a dead body, an alarm will sound, but if they stumble upon their comrade sleeping, they just wake them up. Naturally, if an enemy spots you, the alarm sounds instantly.

Where Quantum Replica makes its best impression is with Alpha’s abilities. He only has a couple, but they do a good job of adding additional depth to the game’s levels. Alpha can dash, which allows him to both get away really quickly or move past a turning guard’s blind spot with ease. He also has an ability that greatly slows down time for a few seconds, which is imperative for getting out of hairy situations. 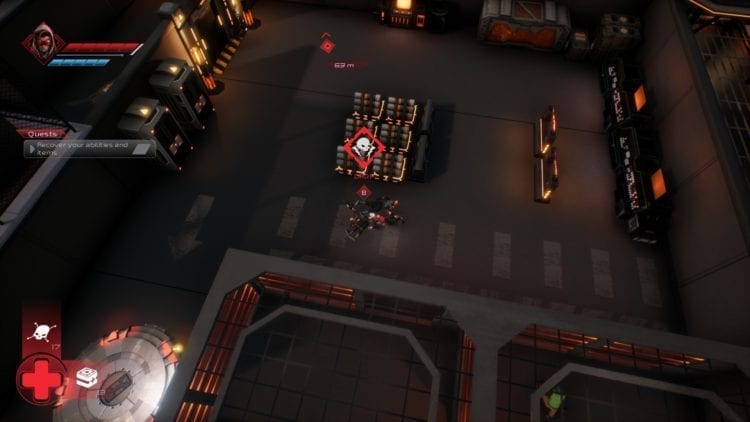 I hope the guards don’t notice my collection of bodies.

These abilities tie into Alpha’s energy meter, which you can increase by finding power-ups hidden throughout the levels. You can also boost Alpha’s health in the same way. These are actually relatively hard to find. I didn’t locate one until around the midpoint of the game, and the game never tells you they exist. Alpha can also carry items that allow him to heal and restore his energy.

Quantum Replica has a fairly limited number of enemy types, but it utilizes them well. There’s the default guard whose flashlight represents their range of vision. As long as you aren’t running, they won’t hear you walking up behind them. Then there are the guards that have a sensor field around them. If you are in the vicinity of this field when one of these guards walk by, they go into immediate alert, which requires you to steer clear of them. Then there are the occasional robot guards based off of one of the bosses. These are pretty frustrating, but I only recall seeing them a few times.

Quantum Replica is also strewn with annoying traps that don’t really work all that well. One of these is a type of floor that’ll crumble if you walk on them. If you’re on them while they crumble, you die instantly. You are meant to dash after stepping foot on them, but the game doesn’t do a good job of making them flow with the level design. Additionally, once you have the time slowing ability, you can just walk over them, completely defeating the purpose of their existence. Naturally, the game does nothing to indicate you can do this. 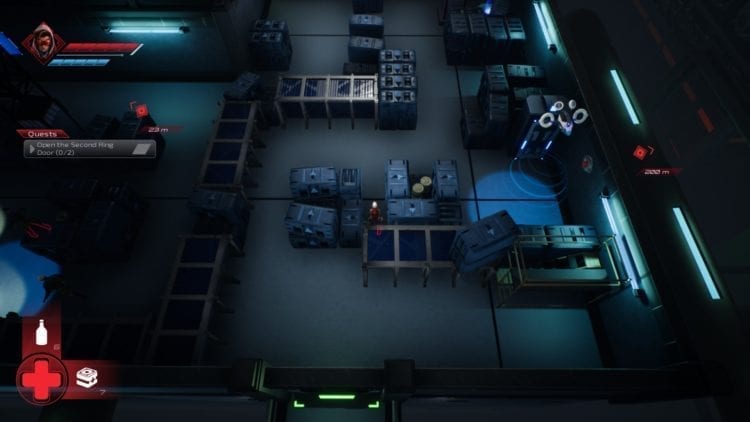 It wouldn’t be a stealth game if you didn’t have to wait for openings.

Then there are the turrets, which are exactly what they sound like. These things are a massive pain, but you can avoid them by using the time slowing ability in conjunction with the dash. Finally, mines show up in one brief section of the game, but you can see them by using the time slowing ability, for reasons that remain unspecified. For the most part, these traps are rare, but they’re always annoying. By the time you learn how to deal with them, you probably won’t see them again.

Speaking of annoying, this game has boss battles. They range from poor to terrible. They’re long, tedious, and having to restart them is especially annoying. All of them feature respawning ammo in the area, thankfully, which keeps you from getting stuck. The bosses aren’t really too bad until you get to the last two. The penultimate boss is only vulnerable after it depletes its energy by shooting at you, and it takes an obnoxiously long time. Thankfully, if you hide behind a dumpster it literally can’t hit you in the first phase. The final boss, in particular, is a ridiculously boring slog that has respawning ammo and health in the room. It does have tricks to learn which make it go by a lot faster.

One part of Quantum Replica that I have to mention is the tank chase sections. When in the city, this annoyingly shrill character in a tank will sometimes chase Alpha around. If he directly hits you with his attack, you tend to die in one hit. These are certainly the most trial-and-error sections of the game. I would sometimes die over and over again in the span of a couple of minutes. They’re doable but extremely aggravating. And having to hear a short snippet of Mr. Cartoon’s annoying dialogue each time makes it so much worse. 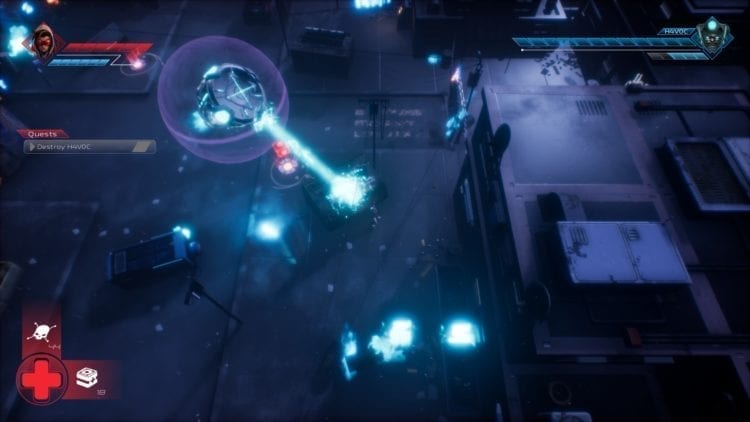 This boss literally can’t hit me here. I just waited for him to run out of energy.

The Game Has Issues But Is Overall A Good Time

However, the last level of the game is the most questionably designed part. All the previous levels are based on sneaking around, but the last level here has an injured Alpha slowly move from point A to point B in a large facility. The only thing that really happens here is that the characters have a really long, terrible conversation. Simply put, it was a really poor choice and, along with the awful final boss, leaves a really bad taste in the player’s mouth.

So, why give Quantum Replica its own spotlight despite the issues I had with it? I overall enjoyed the experience and actually wish it had a bit more to do after beating the game. It took me 7-8 hours to get through the campaign. I was honestly disappointed that there wasn’t anything left for me to do. Once all the gameplay mechanics and enemy behaviors clicked, I really enjoyed sneaking around, and I think many stealth fans would enjoy it as well. If you try it, though, be warned: there’s some serious jank going on in regards to design that just might sour the experience.