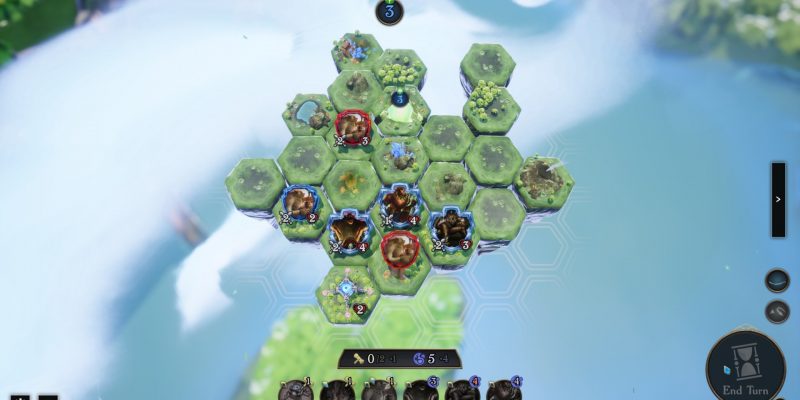 What’s Quinterra, you ask? Well, it’s not quite Runeterra, and it’s not quite Quintin Tarantino. But to answer your question, it bills itself as a rogue-lite strategy game that’s all about placing your units onto grids to best take control of situations. And beat wolf people and dino people to death. Can’t forget that. The game is entering Early Access, but the question stands: is it worth it? Or would you be better off waiting to see how it turns out first?

Quinterra has two options so far: a tutorial and expeditions. The tutorial is one of the more confusing that I’ve seen in recent memory. I can’t recall the last time I played through one and had little-to-no idea how to play the game. Even after putting some time into it, I’m still not quite sure about some of the fundamentals. The basic gist is that each expedition places you in a domain to conquer.

You begin at a set area with combat, merchant, and equipment nodes. Moving forward requires you to complete combat encounters. Before that, though, you have to pick your race. There will be four races to choose from in Quinterra, but so far you’re only be able to play as the Lycans or Imps. Whichever you choose will dictate which units you have at your disposal. This doesn’t bill itself as a card game, but you can certainly think of it as one, since the tiles that make up your available units may as well be cards. 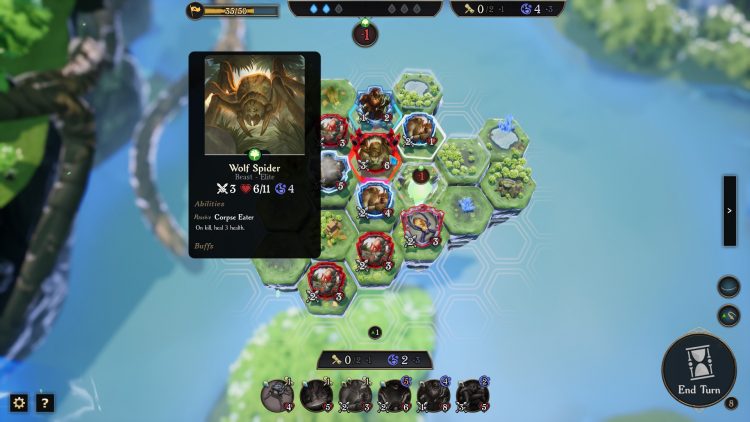 I saw a couple of basic combat scenarios: one that had me competing to own more tiles on the grids than my opponent at the end of turns, and one that simply tasked me with defeating a set number of enemies within a time limit. Each combat encounter takes place on a set of grids that tiles can be placed on. At first, you only have a few tiles available, but can get more by using up the elements of which a  specific grid is made up. However, you can initially only pick grids that contain a certain aligned element, and you’ll only be able to use the others if there were multiple elements on a grid you exploited. The exploited grid then vanishes, and can automatically be replaced later. Make sense? No?

From there, you place your tiles on grids and command them to either move or fight enemies. Grids come in the form of units and the devices that will assist them. Each unit does a certain amount of damage per turn and has a set amount of health. Both of these can be increased with various buffs that can be found by clicking equipment nodes or via merchants. It has a bit of a learning curve, but I mostly got the hang of Quinterra after a little while. Or so I thought. 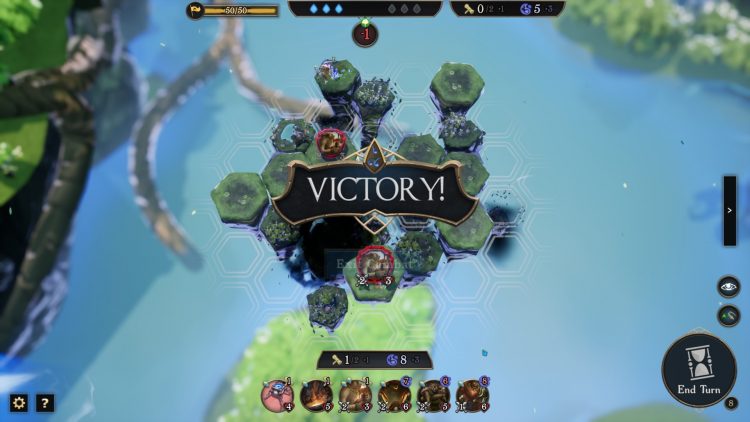 To put it bluntly, there appear to be some glaring balance issues at play here. One combat encounter seemed to be practically impossible, as I was up against an enemy that would increase it and its allies damage every turn, as well as heal itself. It would eventually end up doing so much damage that it one-shotted all of my units and I could do nothing but die. Quinterra lets you retry encounters repeatedly, and I simply couldn’t get my weak, borderline useless units to pose any threat to this insanely strong foe.

As for if it’s worth it right now, if this sounds intriguing to you, then by all means. I’ll certainly be waiting for some balance changes before I jump back into Quinterra though. I can’t stand to get my teeth stomped into the pavement by enemies that are infinitely stronger than the units I possess.