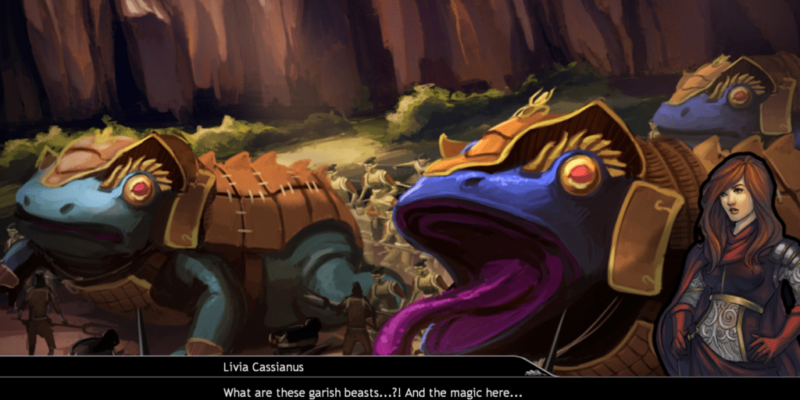 This feels like a bit of a crisis of self-belief, but in light of recent events it might be time to for me to ease back the levels of cynicism over mobile ports. That doesn’t mean critical reassessments for rubbish like Deus Ex: The Fall (still awful), or an acceptance of the kind of “free-to-play” psychology tricks usually found inside the gambling industry, but a recognition that some of these recent PC re-jigs have been alright.

July’s King of Dragon Pass re-issue on Steam had an alarming obsession with holding-and-dragging (proper mouse scrolling is thankfully supported now), but otherwise updated that great game in a tolerable way. Legions of Steel did much the same, giving people a chance to play a version of that old board game on PC. And, later this month, Inkle will be putting the excellent Sorcery! series on our platform; hopefully with an appropriate interface.

As the previous couple of paragraphs probably gave away, Ravenmark: Scourge of Estellion is another title making a pretty considered move from iOS to Steam. 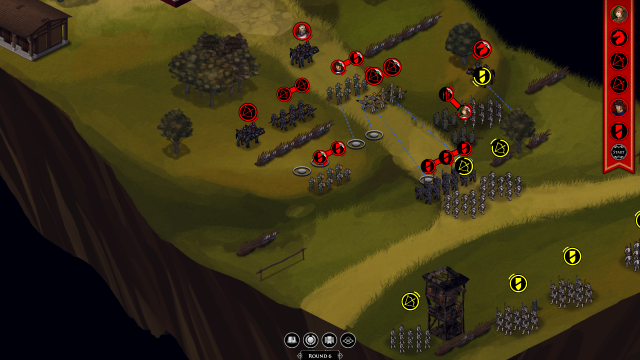 This isn’t a full scored review, because Ravenmark is about 40 hours long and here at PC Invasion we don’t pop scores on things before we finish them. Since I doubt I’ll have time to actually do that, but still want to write a little about it, you’ve got this impressions-type compromise.

As tends to be the case with Slitherine-published titles, Ravenmark is a tactical battle game based primarily around the fantasy realm of Estellion. To the best of my knowledge, all of the copious back-story and ‘lore’ has come from developers Witching Hour (and not from a pre-existing tabletop game as is sometimes the case). I’d hesitate to apply the word ‘strategy’ too heavily here, because encounters in Ravenmark are all stand-alone. There’s plenty of tactical maneuvering during battles, but none of your actions, beyond binary success or failure, carry forward (and, similarly, nor do any of your named commanders progress down any skill trees).

This structure frames the encounters in very particular ways. It means that in certain situations it’s not just advisable to use troops as expendable, but actually necessary in order to secure a retreat or (as in one case) protect some boats from exploding suicide-demons. The stand-alone nature of each battle also means that some of them take on the appearance of a sort of tactical-puzzle hybrid. 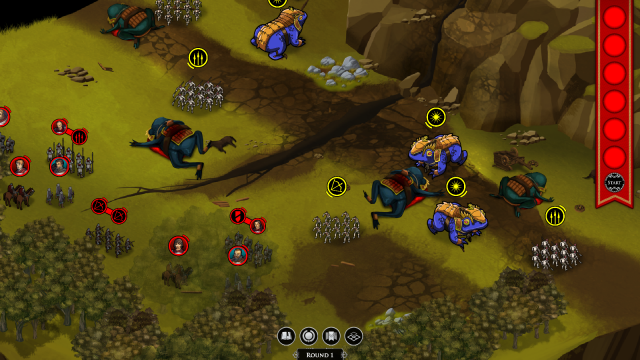 These frog jerks look amazing, but can eat your units whole.

In the best cases, this means deftly reacting to new, surprise threats with the tactical tool-sets Ravenmark gives to you. At worst, it forces you to play through a combat encounter once to ‘learn’ what the mid-point twist might be, and use this foresight to your advantage in a second attempt.

That latter kind of trial and error certainly won’t appeal to everyone, but Ravenmark does have an interesting overall rule-set that’s kept me interested at least through the first pair (of seven) campaigns.

Units have initiative values that dictate the order in which commands are executed, but after all commands for the turn are ‘locked in,’ both sides move their troops at the same time. In practice this means some degree of predicting how and where enemy units will move when planning your own positioning. Sending some (slower) infantry to engage mounted enemy archers may be a waste of time if they’re going to skip out of your way and leave your soldiers in the middle of nowhere.

To complicate matters a little more, Ravenmark gives players six ‘command points’ per turn to use. That means only six units can been given orders in a single turn. To begin with, this is not a problem. But later battles put you in control of more than six units, which means either making smart use of your command points, or of the game’s formation system (which can combine smaller ‘dagger’ squads of the same troop type into larger groups). It’s also possible to issue repeating ‘Standing Orders’ (along the lines of ‘advance forward’ or ‘keep chasing that unit over there’) to save yourself command points in future turns. Or to get your units in terrible trouble when you forget what you’d told them to do. 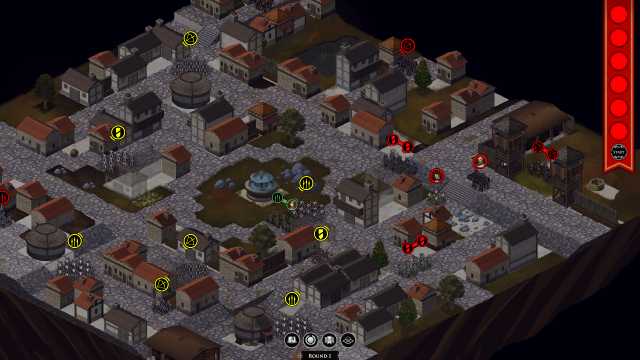 Narrow streets like can make it tough to get your formations in place.

Formations (which can be up to three individual units strong) don’t just save command points, they also give units additional skills. A single unit of archers can get down narrow streets and navigate around terrain with ease, but the more unwieldy grouping of two or three units can let loose multiple volleys in one turn. The dagger/formation trade-off is, so far, largely one of versatile movement  vs increased damage and better skills.

Since you have no control over where your troops are deployed at the start of a Ravenmark encounter, part of the ‘puzzle’ aspect of formation control is figuring out how to quickly rearrange them in a more effective manner.

Again, I can see people being bothered by this, but it is explicitely part of the map design. Scenarios are scripted around things like fighting retreats, holding the lines against waves of foes, defending awkward points on the battlefield, and so on. Figuring out how to best re-deploy your soldiers, and quickly, is very much part of this. To get the best ‘three medal’ rating for a battle, you tend to have to wrap it up within a set number of turns.

There are a couple of things I’m not enjoying quite so much. It bothers me in tactical games like this when units with a sliver of health left will still deal exactly the same damage as one at full health (altering this would radically alter the design of the game, but it bothers me on principle). I’m also not entirely convinced by Ravenmark’s extensive use of cut-scenes. It’s going for a sort of Valkyria Chronicles effect, with your ‘main’ group of characters having a chin-wag between near-death experiences, and mixes in some distant scheming politics for good measure. 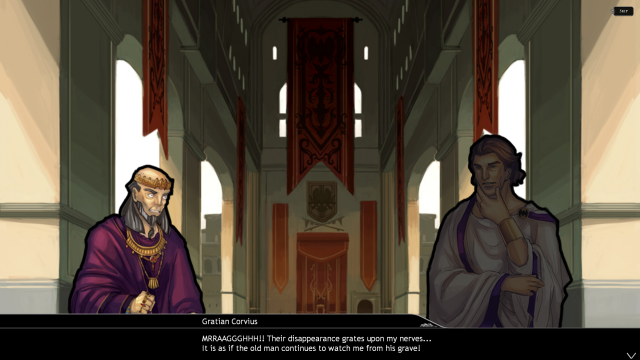 This guy emotes like drunk Orson Welles in that Paul Masson advert.

And by “some”, I mean every other cut-scene introduces new characters with complex names talking about deep lore that you won’t (yet) understand. I appreciate Ravenmark’s dedication to treating the audience with intelligence when it comes to introducing back-story and characters without lengthy exposition, but the approach is taken a little far. The dialogue isn’t always the best either, veering a little too woozily between Portentous Fantasy Tidings, anachronistic quips, and anime stylings (“are you i-in love with her, little brother?” *sweatdrop sweatdrop*) for my tastes.

The transition from mobile, however, seems to have gone very smoothly. There are a full set of resolution options, a toggle for fullscreen and windowed mode, plus a user interface that appears to have been specially redone for the PC. No complaints about the keyboard and mouse controls. Unit movements can be tripled, so you never have to sit through 20 AI pieces wandering slowly around the map. Price-wise, it also seems to (currently, with a discount) be the same $10 USD cost as on iOS.

Again, this isn’t a full review. I’m only part-way into Ravenmark, so I’ve no idea if the more bothersome puzzle-like elements to some of the maps will start to overwhelm the interesting tactical aspects. So far its brought some novel concepts, tight maps (encounters have taken 15-20 minutes each), and a little more proof that mobile ports can sometimes surprise in a pleasant way.

Amnesia is free-sia, The Dark Descent costs nothing today