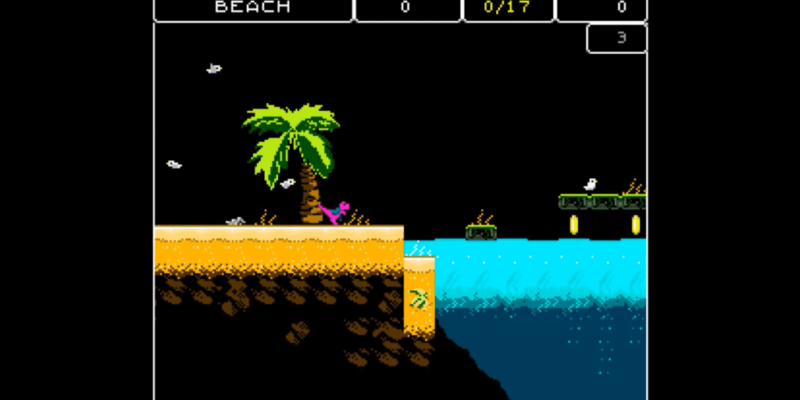 There are a lot of indie retro platformers out there. Typically, these try and copy the looks of NES games and run with the tough-as-nails gameplay those games were famous for. Sometimes, though, a developer goes the other way with it. Rex: Another Island isn’t like other retro platformers. It’s really short and simple but carries a lot with it that many don’t.

Visually and audibly, while I mentioned that most games try and copy NES games, Rex: Another Island focuses on looking and sounding like a ZX Spectrum game. It uses a really limited neon color palette. And the music is simple but relaxing. The game is challenging in spots, but most of that challenge is optional. The game really focuses on being more of a meditative experience where others try for controller-throwing anger.

Rex: Another Island tells the story of a small, purple dinosaur on his quest to move to the right and find a door. If someone plays the game with the intention of making it to the end as quickly as possible, all they have to do is move right until they get to this door. Just like that, the game ends. Played this way, the game can easily take less than an hour. However, it can be more complicated if the player wants. 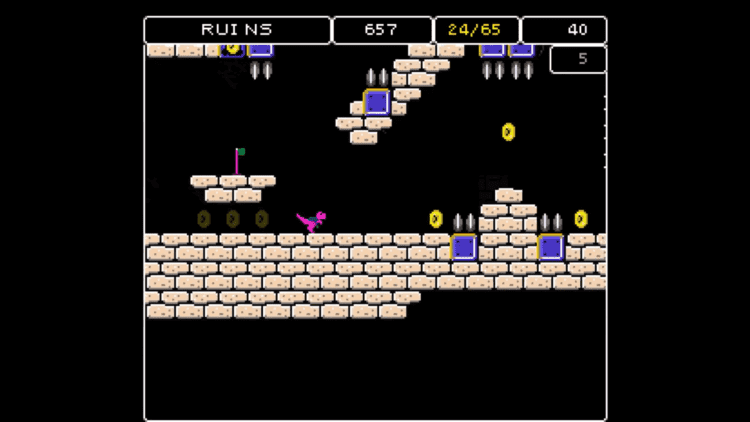 Finding Coins In Rex: Another Island Is Very Relaxing

The game world has 777 coins scattered over it, and collecting all of them unlocks a different ending screen. Each area has a checklist showing the number of coins you haven’t found, and, even though the reward is small, collecting all of them is a very pleasurable experience. On top of that, there are 5 gems scattered throughout the world as well. Collecting all of these will open a separate door for yet another ending screen. I’ve played through the game twice and collected all the coins and gems in both playthroughs. I didn’t need to, but the game is just simple fun, to the point that I felt like doing it.

Although the game isn’t a Metroidvania, the world is one big, seamless level. All areas are interconnected, and there are no screens separating the overall map. You can also activate warps to get around the map faster, which helps for hunting down any coins you may have missed. The map is very well-designed, with distinct areas each hosting their own accompanying songs. It’s hard to describe how relaxing this game’s atmosphere is, despite how simple its ingredients may be.

As you can imagine, Rex: Another Island is primarily a platformer. You can’t actually do anything other than walk and jump in this game. Thankfully, the controls are insanely tight. Controlling Rex feels fantastic, and he responds wonderfully to even minute movements. Trickier platforming segments aren’t all that difficult, simply because Rex does exactly as prompted. Whether avoiding spikes or navigating tight spaces, the game is practically never frustrating, even though Rex can only take a single hit. 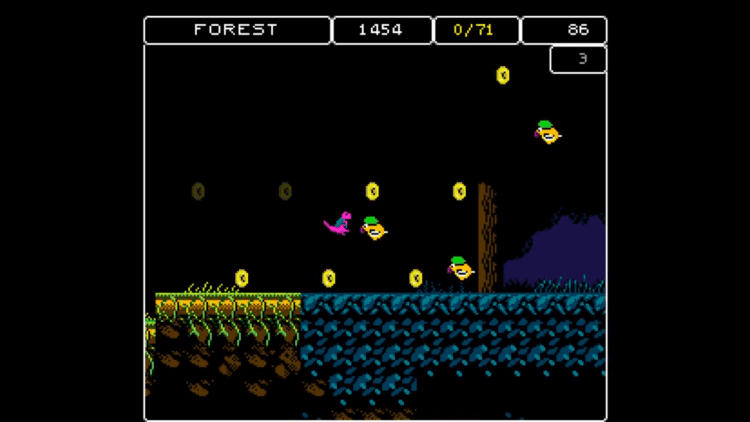 The Enemies Are Pleasant Obstacles

Thankfully, Rex: Another Island is covered in checkpoints. They’re close together, meaning that death is only a minor setback, which makes the more challenging sections rarely frustrating. I’d imagine this would probably not be the case if they were further apart. Rex can also double jump, which grants him a large degree of air control that feels just right. Narrowly dodging a set of spikes by pulling off a last-second double jump is always satisfying, especially with controls as responsive as these.

There are enemies all around, of course. As you might expect, they’re dispatched by jumping on them. The way Rex bounces after landing on a foe is really satisfying, as is chaining these landings. None of the enemies are really challenging or problematic. At times, they need to be used as stepping stones to collect the game’s coins.

Make no mistake, though – Rex: Another Island is a very small game. Even finding every last thing the game has to offer won’t take more than an hour and a half. That said, the difficulty feels pitch-perfect, the game’s aesthetic is pleasing, and the controls are exactly as they should be. This isn’t a game that got a lot of attention, and it certainly couldn’t set the world on fire. But it is an extremely charming indie gem that I’ll certainly be going back to again.

Giveaway: Take One Of Our 2,500 Steam Keys For The Swords And Soldiers 2 Multiplayer Beta