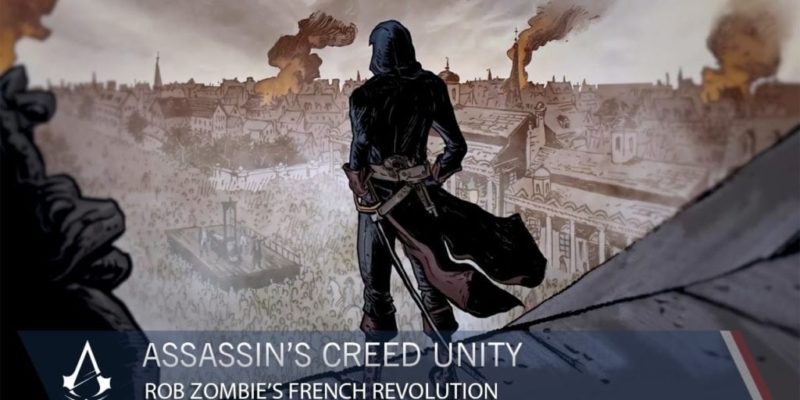 No, this is not a joke. Ubisoft have teamed up with Rob Zombie to make an Assassin’s Creed Unity animated short. Do not adjust your sets.

I’m not quite sure why, but… oh, here’s the press guff: “Assassin’s Creed Unity teams up with famed musician and Master of Horror Rob Zombie to depict the chaotic and brutal events behind the French Revolution. Illustrated by The Walking Dead co-creator, Tony Moore, this animated short brings to life the gory details, bloody battles, and terrifying events of the Revolution.”

Rob Zombie. Assassin’s Creed Unity. I’m sorry, I’m having a hard time getting my head around this. At least the VICE magazine stuff makes some sort of sense. Credit for originality, though.

As you might expect, this means it’s an incredibly gory animated comic, titled “Rob Zombie’s French Revolution”, which actually makes me think of something entirely different. Expect to see heads being hacked off with swords, careless eye surgery being performed with a knife, screaming people with mutilated faces being put into guillotines… you get the picture. The red, excessively bloody, picture.

Assassin’s Creed Unity is due out on 28 October, unless the PC version is delayed for some strange reason.

Middle-earth: Shadow of Mordor trailer has Celebrimbor in it