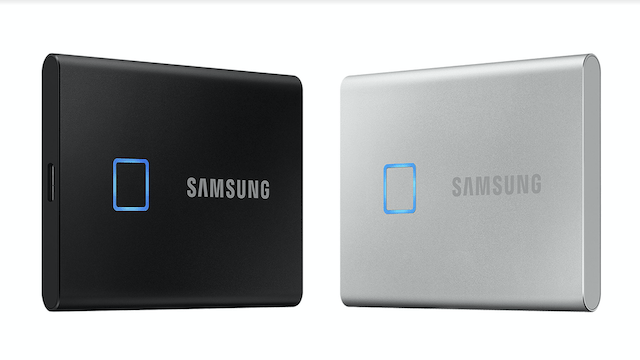 CES is in full swing, and Samsung Electronics is putting on quite a show. But it’s about to change the storage game as we know it with its new external storage device. The company has introduced the Portable Solid State Drive (SSD) T7 Touch, which is slated to release over the summer. The new SSD features fast transfer speeds, based across the USB 3.2 Gen 2 Standard. But it also has a neat security measure in store.

Why do they call it the T7 Touch?

In order to keep your information secure, there’s a hardware security measure built into the drive. It utilizes a built-in fingerprint sensor, which scans for support to the drive.

Dr. Mike Mang, vice president of Brand Product Biz Team for Samsung Electronics, explained a bit further. He noted that data will be kept secure thanks to this “fingerprint recognition,” while it keeps up the “industry-leading transfer speeds” consumers have come to expect.

With the help of a Motion LED, users can scan their fingerprints at any time to keep their data safe. We haven’t seen too much of it in action just yet, but it sounds very promising — and safe.

To get more information on the SSD drives, be sure to check out the official Samsung page.

Giveaway: Fight, build, and explore in the MisBits closed beta

Red Dead Online gets new clothing, like sandals for your cowboy