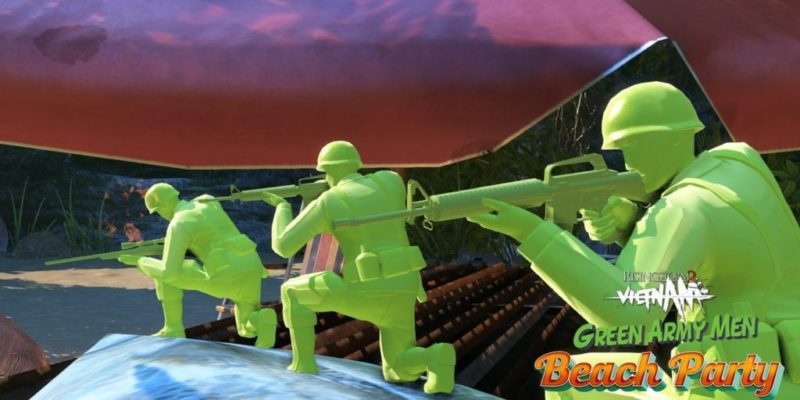 Publisher Tripwire Interactive and developer Antimatter Games have released a new DLC pack for their acclaimed military shooter Rising Storm 2: Vietnam, and the results are a bit kooky. Spinning off from a funny mod, the Green Army Men Beach Party DLC pack introduces the plastic figures into the realistic FPS with a tropical spin. Taking place on a beach with Sarge’s army in tow, players can expect to relive their childhood memories of tinkering with grandpa’s toy collection in virtual form with up to 64 other players online.

Available now on Steam, you can grab the Beach Party DLC pack for $16.99. A first-week sale knocks off 15 percent, bringing it down to $14.44. If you’re unsure you’ll enjoy it, Tripwire is holding a free week for Rising Storm 2 that includes the recently released DLC pack. For the low price of nothing, you can test out Beach Party and see if it lives up to your memories of the old 3DO series. If you’re still not sold, know that all owners of Rising Storm 2 can partake in the Green Army Men modes for free as the Rifleman class. Buying the DLC grants you access to more classes, not to mention helps support the developers.

As for what content this new DLC brings, expect to battle on four new maps with 12 other different weapons. Maps include “Beach Party,” “Backyard,” “Pool Party,” and the “Green Army Men Christmas Map” (as previously featured last December in Rising Storm 2’s holiday event). All fall damage has been removed to better capture the figurine nature of these toys, and players can anticipate battling through sandcastles, barbecues, and building blocks. It honestly sounds like a real blast, and I hope it leads to its own proper spin-off series.

How are you feeling about Rising Storm 2: Vietnam – Green Army Men Beach Party? Tell us down below!