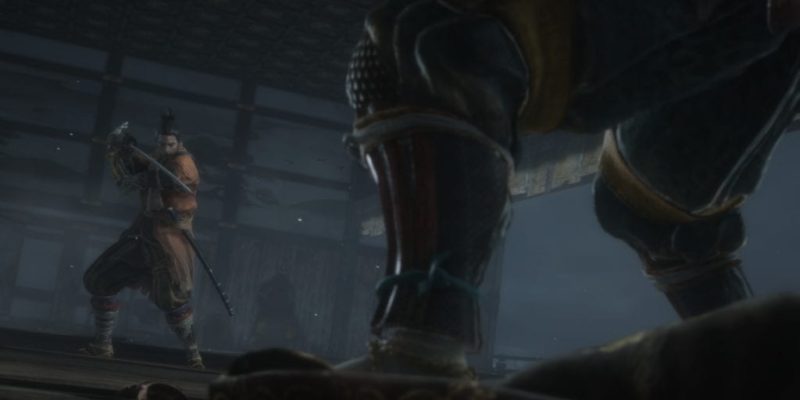 Prior to the release of Sekiro: Shadows Die Twice, there was a lot of hubbub surrounding the sort of game it would be. FromSoftware claimed that it would feel very different from their Souls games, so now that the dust has fallen, I’m going to break down their similarities and differences for anyone who hasn’t been repeatedly murdered by their new game yet. 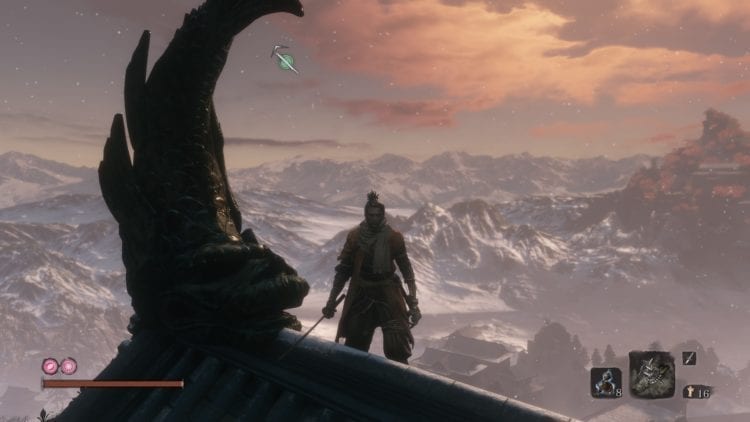 This is the most obvious one. The combat in Sekiro feels absolutely nothing like the combat in Dark Souls. While other entries were mostly about dodging and blocking, this one is about parrying. You can dodge and block here too, but your dodge has fewer i-frames, and standing and blocking is a good way to accomplish nothing. Much like Bloodborne, aggression is key, but you’ll get slaughtered if you try and play it the same way.

Sekiro differentiates itself even more by the way you’re meant to damage your foes. In past games, you could damage them little-by-little while doing your best to stay safe. Here, enemy health is not your primary concern. Much like you, enemies have a posture meter that increases when you hit them while they’re blocking. If you back off on hitting them, they regain their posture and you must start over from the beginning. The only time you want to hit-and-run is if their posture recovers quickly anyway; reducing their vitality lowers the speed their posture recovers.

But in general this means that you don’t want to back away or dodge when enemies attack. The best way to deal with this is to just hit them and hit them until they deflect your attack, which signals that they’re about to attack you. You then parry that attack and keep going as long as you can. Parrying a foe tends to do a good amount of posture damage, so this keeps the pressure on. Enemies also have different types of attacks that you can’t parry, such as grabs and sweeps, but you can jump over these, kick them in the face, and then rain slashes on them while landing.

Suffice to say, combat in Sekiro is completely different than in Souls games. Anyone coming into it thinking they’ll have an upper hand is going to be in for a rude awakening. The many hours spent honing my skills in other games haven’t helped me at all with this new combat system. 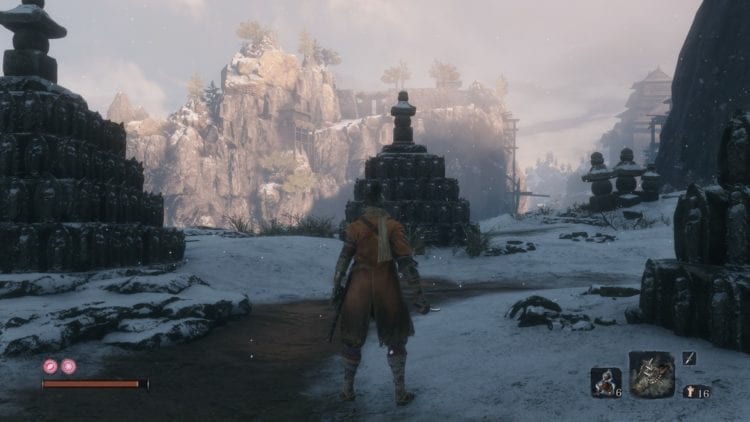 Trying out different weapons and finding a style that works for you is a big part of what makes Souls games so great. In Sekiro, though, you get one sword. That’s it. You use it the whole game. You do get a good amount of secondary weapons and skills, but these use shared ammunition that you can only carry a certain amount of, meaning that you shouldn’t rely on them as much. While you can upgrade all of these secondary weapons (and even get additional skills for them), your sword will only do more damage with something we’ll talk about later.

And no, there’s no equipment either. No changing your armor, or wearing different sets to increase your poison resistance, or playing Fashion Souls. It’s extremely pared down compared to the Souls series. It’s not necessarily worse – it’s just very different. 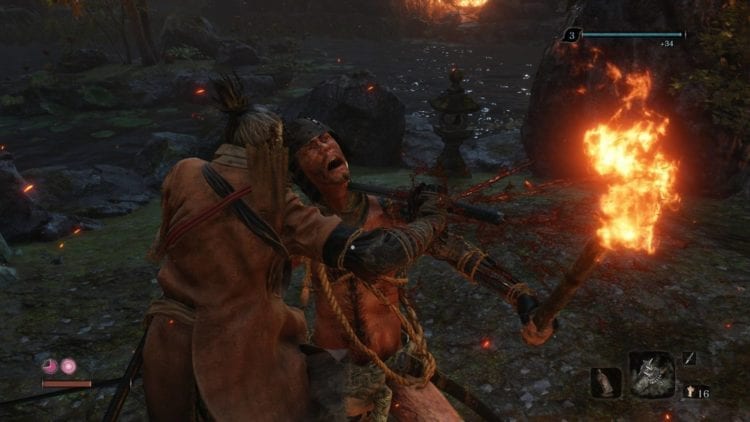 As far as world design goes, Sekiro is similar to the first Dark Souls. The world is open and interconnected. You’ll have many different ways to go, and there’s a lot to explore, with a number of different routes and areas available at any given time. Carefully entering a new area and scoping it out for ways forward and items to grab will feel quite familiar to veterans. But Sekiro has one very major difference that changes this up considerably.

You’re probably aware of this by now, but Sekiro is also a stealth game. Due to this, arriving in a new area can play more like a Tenchu game than a Souls game. It’s simply inadvisable to fight many enemies head-on, so it’s in your best interest to sneak up on enemies for a stealth kill instead. You can enter a crouch mode that reduces noise and visibility and can even throw pieces of pottery in order to lure enemies. It’s basically Dark Souls with a stealth system.

Having a grappling hook helps with this, too. Areas are full of rooftops to run along or places to perch and observe the surroundings, and it’s also a nifty way of getting away from battles you don’t feel you can win. The verticality makes a big difference to how you explore and approach each new zone.

The other big difference is how the game world is littered with extremely tough mini-bosses. You’ll frequently come across one of these, work like hell to defeat them, and then find another one waiting close by. These function almost like puzzles, as they’re typically surrounded by cronies that you’ll need to pick off. One interesting thing is that you can usually take away half of their health by sneaking up on them and executing a deathblow. Suffice to say, they greatly change the way that you need to approach areas. 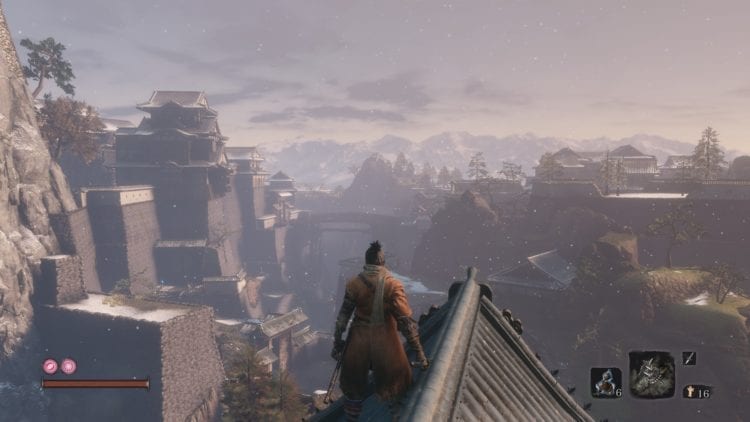 It wouldn’t be a FromSoftware game if you weren’t dying every five seconds, and Sekiro is no different. In the Dark Souls series, dying meant you’d hollow and drop your experience and have to pick it up later without dying first. This game, however, throws all that out the window. If you die in Sekiro, you lose half of your unspent experience points and half of your money. You cannot get them back.

However, you have a chance to not lose anything at all. The more you die, the more something called dragonrot accumulates. At low accumulation, each death carries with it a 30% chance of you getting to keep your experience and money. The more you die, the more this decreases and the sicker the NPCs around you get. It’s really not much of a problem, though, as curing this isn’t difficult. And you shouldn’t be going into tough fights with lots of money and experience on you in the first place.

The biggest difference, however, is that you get resurrections in Sekiro. Each time you die, you can bring yourself back to life with half health on the spot. If this makes the game sound easier, that is absolutely not the case. While you obviously couldn’t do this in Souls games, it’s baked into the difficulty here. Many enemies can dispatch you in just a few hits, so even with the ability to resurrect, I’d say Sekiro is a great deal harder than its predecessors. 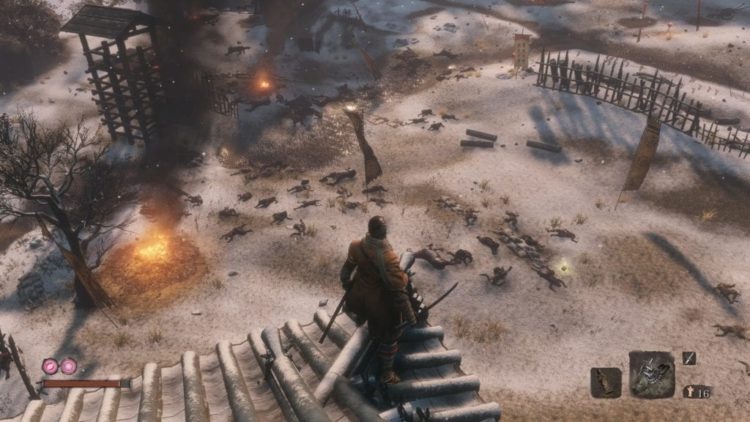 Refilling your life in Sekiro is pretty much the same as in the Souls games. You find an item, give it to an NPC, and then you get an extra use of a healing drink. The big difference is that you really don’t want to let up your attack, so healing is much riskier and less useful than in other games. You can also have other healing items, but the game limits you to carrying three at once.

This is another area where things are mostly similar. The sculptor’s idols in Sekiro are very much like bonfires. You can freely warp from each of these locations as you wish. And of course, each time you find one, you can rest at it, which refills your life and healing drink, or use experience to improve your character. This leads to one of the biggest differences between this game and others. 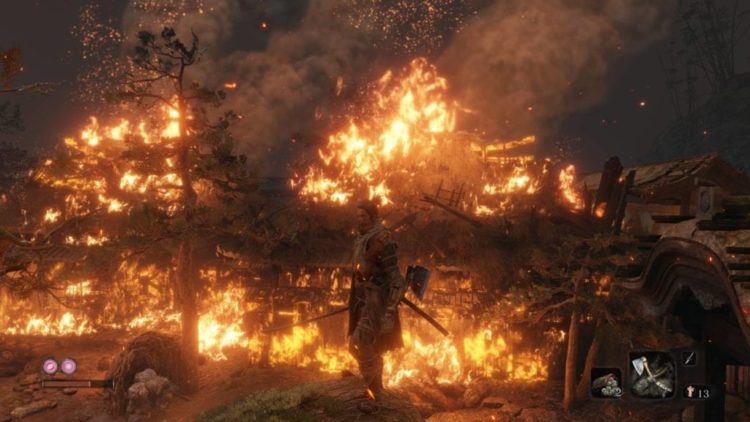 This one’s a doozy. Previous games allowed for a certain level of difficulty mitigation. Boss fight too tough? Go and farm some souls so you can increase your stats. Maybe go farm some materials to improve your equipment while you’re at it. In Sekiro, however, you only use experience for skills. You can buy both combat arts or latent abilities with it, but you can only gain more health and do more damage by collecting specific items from strong enemies.

The way it works is that you need to collect four prayer beads to make a necklace. Each necklace increases your health and posture. But these are mostly sourced from defeating minibosses. Increasing your damage, on the other hand, can only be accomplished by using an item dropped by bosses. This means that you can only really strengthen your character on the game’s terms. You can explore a great deal and get more healing items and prayer beads, though, which can make a big difference. You can also grind for skill points, as new techniques can really turn the tide. 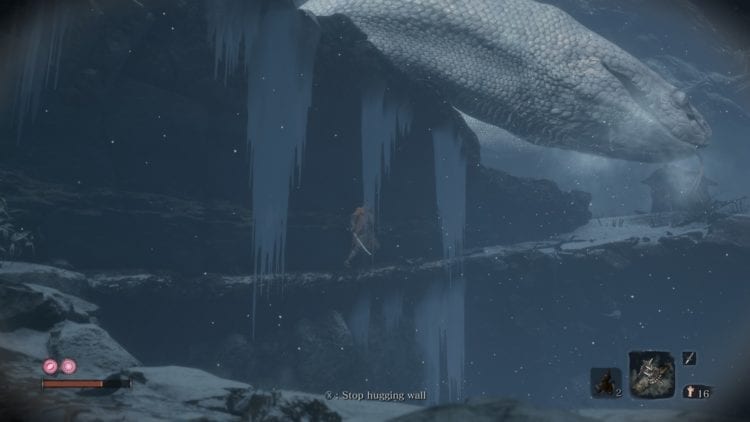 The Souls games are famous for their online components. Getting invaded at any time and summoning help are cornerstones of the series. Naturally, Sekiro throws this out the window entirely. That also means that there won’t be any bloodstains to warn you of impending peril. It’s purely single player and you’re totally on your own. But at least you don’t have to worry about players showing up and hunting you. The enemies do that well enough on their own. And this also means you can pause!

While Souls games are famously cryptic, Sekiro is the exact opposite. It has cutscenes, a well-explained narrative, and a voiced protagonist with a personality and motives of his own. And where previous games refused to explain things or give many hints, Sekiro is bursting with them. Eavesdropping on NPCs and talking to people will clue you in on finding weapons and beating bosses. It’s a very marked difference that is much more user-friendly, which is the exact opposite of the combat.

And There We Have It

So, Sekiro: Shadows Die Twice is definitely both very similar and very different in comparison to previous FromSoftware games. I think the biggest takeaway is that, while previous games offered multiple ways to overcome a tough challenge, Sekiro tends to focus on skill alone. No amount of grinding can save you this time. You either need to use skill or die. That, on its own, makes Sekiro harder than any of its brethren.

Wolfenstein: Youngblood And Cyberpilot Are Coming This July

Borderlands 3 And Remasters Are Coming Soon