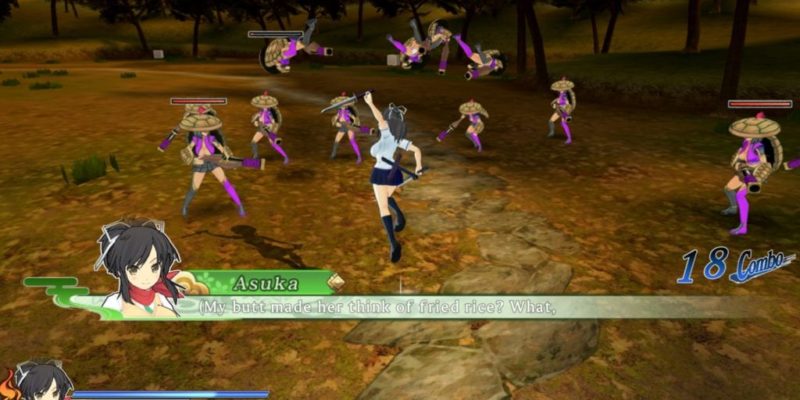 “When I think ‘busty ninja strip-fighting game’,” wrote Peter Parrish, as he forwarded this key to me, “I think Tim McDonald.” Depressingly, I can’t even be annoyed about this, because I’ve actually played Senran Kagura Shinovi Versus on the Vita. Not for very long, though, because I didn’t actually like it very much.

Senran Kagura Shinovi Versus is ostensibly a 3D brawler in which ninja girls with large tracts of land punch huge hordes of enemies in Dynasty Warriors fashion, and occasionally engage in some one-on-one bouts (and no, that’s not an innuendo). It’s even more ostensibly about torso torpedoes.

Right. Let’s have a look at the PC options, shall we? 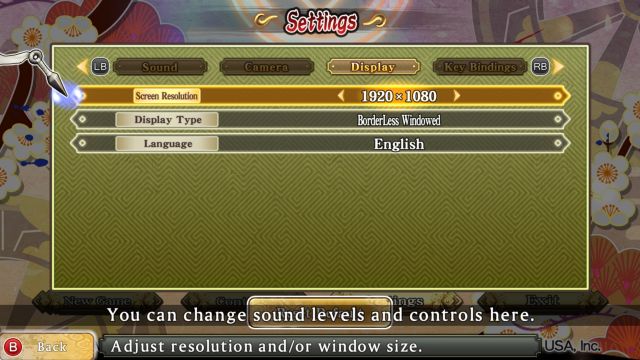 Yeah, that’s basically your lot. I don’t really know what to say about this, except that it’s… perhaps a little bit lacking in the visual options. Unlike in its depiction of sweater puppies.

On the plus side, there are also control options! 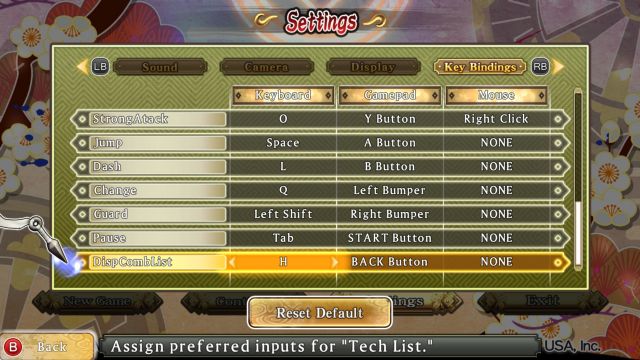 Credit where it’s due: the menus and game understand that the mouse exists. There are mouse control options, and you can navigate through the menus using the mouse itself.

Credit removed for the fact that, outside of the menus, it only seems to understand that mouse buttons exist. The camera doesn’t appear to recognise the mouse as a potential input, rendering the mouse pretty bloody useless for actually performing violence to clothing. If there’s a way to convince it that the mouse is something you might use to control the camera, I couldn’t find it.

This also means that, to play the game without a gamepad, you’re going to need at least three hands (and no, that’s not a masturbation joke). Considering you’ve got stuff mapped to both the left and right of the keyboard’s alphabet, as well as the arrow keys and the numpad, you’ve got your work cut out trying to play this with normal human appendages even without factoring in the mouse. Also, it does the usual bullshit of having every in-game prompt default to gamepad button displays even when there’s no gamepad plugged in, so you need to do some memorisation as to what each gamepad button corresponds to, and what you mapped that to on the keyboard. 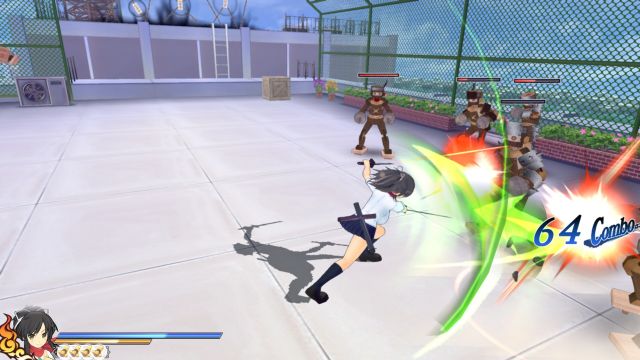 Still, it’s pretty satisfying to rack up a 600-hit combo.

There are positives. The PC version has HD-ified textures and runs at a silky 60FPS, and while I have no idea how well optimised it is because my computer is leaps and bounds above the recommended GTX 760, I strongly suspect that it’ll run just fine on most hardware. Loading times can occasionally be a bit lengthy, but that might also be because my data drive desperately needs a good defragmenting. Also not an innuendo.

So, basically, this is a PC version that’s really more an HD-ified console version. It runs fast and looks rather nice, and it comes with all of the DLC released for the original, but you’ve got no real tweakables and you need a gamepad, four hands, or an hour spent fiddling with the controls.

Then there’s the game itself, which… eh. Honestly, I don’t like it much.

Stages usually involve two things: fighting your way through hordes of enemies in Dynasty Warriors style, racking up ridiculous combo counts; and then taking on a boss in a one-on-one fight. Sometimes a stage just involves one of these things. Sometimes the boss is there with loads of mooks.

The problem is that the mook-brawling isn’t all that entertaining thanks to a bloody awful camera and tight, enclosed arenas (still not an innuendo). Likewise, the one-on-one fights use the same brawler combat system, and that’s not really great when it comes down to the furious one-on-one action (oh, fuck it, let’s just say that was an innuendo).

I’m hardly an expert, I’ll grant you. I played Senran Kagura Shinovi Versus for about five or six hours on the Vita and I’ve chucked an hour or so into the PC version. Perhaps there’s an awful lot more depth to the game than I suspect! I just haven’t seen any real indication of this.

There’s a lot of variety, certainly: you’ve got 20-odd characters, all of whom have different combo systems and attacks. They all level up, learning new moves to chain together. They’ve all got three “styles” – the basic clothed attacks, the special ninja costume which fully restores health on activation and gives increased damage and resistance, and Frantic mode, which strips your character down to their underwear and basically turns them into paper, but lets them chain together basic attacks infinitely. All three of these level up separately and have their own unique combo chains. 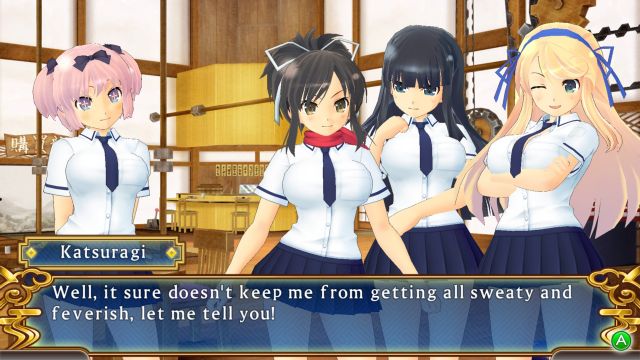 There’s also a store which lets you purchase new costumes/accessories/music tracks, a Lingerie Lottery which gives you a random undergarment to equip on the ninja of your choice, an innuendo-tastic story mode for each of the three ninja schools, a series of sub-missions exploring the motivations of each ninja, and a multiplayer mode. So yes, it’s extensive.

Oh, right, and you also strip off your enemies when you fight them. Successful combo chains might knock off some of their clothing. Certain special moves are guaranteed to rip off either a lower or upper garment. Perform well enough and you might even be able to strip them completely nude at the end of the fight (although, yes, it’s entirely censored; this is meant to be tongue-firmly-in-cheek rather than pornographic). And, yes, there are jiggle physics based on lunar gravity.

It’s a decent enough idea – I’m just really not a fan of the execution. The girls themselves aren’t particularly interesting, and the combat system never clicked with me. As these are the game’s two draws (other than its other two draws, obviously) that’s a bit of an issue.

On the other hand, lots of other people seem to like it, so what do I know?

Either way, this PC port of Senran Kagura Shinovi Versus is firmly in the “slightly naff” category; it’s perfectly acceptable if you’ve got a gamepad, but it’s definitely something that’s been roughly shunted onto the PC rather than carefully and lovingly converted for optimal satisfaction on the best platform.