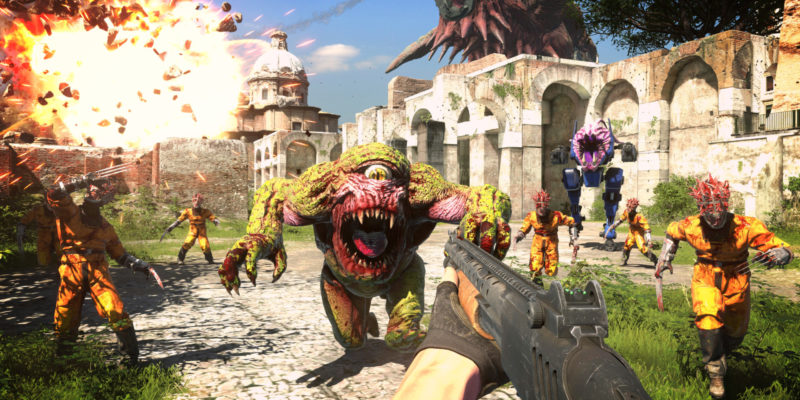 Serious Sam 4, the not-so-serious shooter from developer Croteam, was initially set for an August release. However, the team has taken to Twitter to announce that the launch date is getting pushed back a month, to September 24. While this may be disappointing, it doesn’t come as a surprise. 2020 has thrown up its own set of challenges, with lots of games getting delayed as a result. Hey, at least we get a new trailer though.

Well, said trailer is 18 seconds long and features a headless dude running into a digital release date sign. It might not be much, but it does match Serious Sam‘s over-the-top tone. Devolver Digital, the game’s publisher, know a thing or two about that as well. Its yearly game conferences always bring some absurd laughs, and this partnership feels like a no-brainer.

Back in June, we interviewed Croteam’s Davor Hunski about Serious Sam 4. He touched on what the fourth entry will bring to the series, and the direction of the franchise going forward. It’s been a long time since Serious Sam 3, and the industry has changed a lot since then. Hunski said that the series still works so well in 2020 though, so the team didn’t feel the need to alter all that much. Of course, it will still be modernized to a certain degree, especially graphically, but Croteam’s approach wasn’t to radicalize the series.

It’ll probably be less of a departure than DOOM Eternal then. The other crazy, classic shooter series introduced a lot of new mechanics into its 2020 sequel, like first person platforming and actual downtime. Don’t expect much of that in Serious Sam 4 though. The ante only looks upped from the third game, which was plenty action-packed as it is.

Serious Sam 4 now lands on September 24 for Steam and Stadia, with a console version set for 2021.