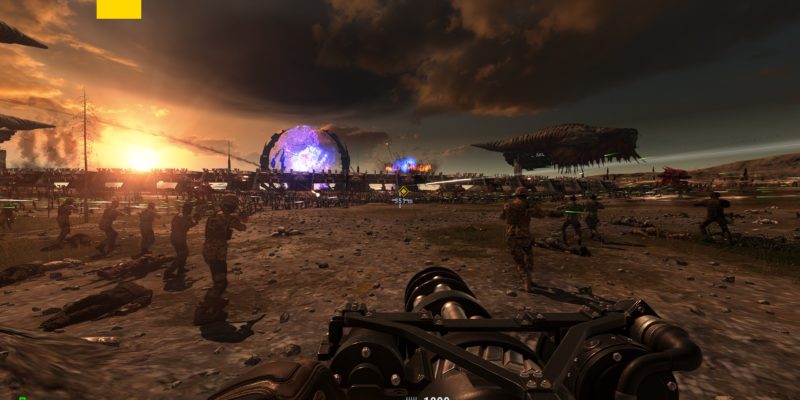 Sam Stone has had a rough go in regards to sequels. Although the first entries in the franchise are well-loved by fans, many were turned off by the cartoony direction of the second game and the military FPS-like focus that the third game offered. Serious Sam 4 successfully brings back much of what people wanted to begin with while also updating various aspects of later entries. With it, Croteam have created the strongest game in the series that fans will likely greatly enjoy regardless of which of the other games they prefer.

The game begins at the very end, with Sam leading the charge against Mental’s forces in Tunguska. Hundreds of enemies fill the screen along with a hail of gunfire, which is quite a sight to behold. After a couple of minutes (or seconds, if you manage to get yourself killed immediately), the story goes back to the beginning, with Sam and the other members of the Alien Artifact Acquisition team moving via a convoy in Rome for the purposes of meeting a Russian priest who knows where to find the Holy Grail. Which is an alien artifact, apparently.

Serious Sam 4 features slightly earlier versions of characters from the third game and similarly has a focus on their military outfit. Thankfully, that game’s grittiness is gone. In its place is almost pure comedy. The vast majority of the dialogue is meant to be funny and, while the game is endlessly stupid, it’s very frequently successful in its attempts at humor. The characters are cliched but their voice actors do a good job and their banter is endearingly asinine, even if Sam’s voice sounds a bit off after all this time. It’s not uncommon to listen to them bicker about proper one-liner deployment, and their ceaseless use of snide remarks and snark fit right in with the ridiculous chaos happening at nearly all times. The overall story here is almost completely irrelevant to the franchise as a whole. Which is fine, although it’s kind of weird that the story hasn’t moved forward for Sam after 15 whole years. 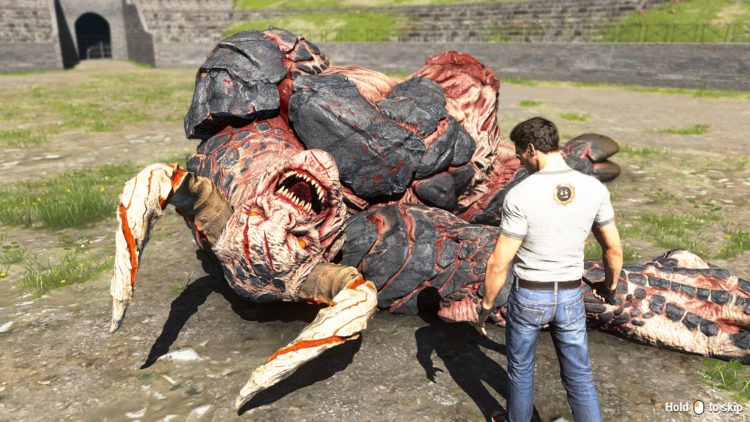 If you’ve played any other game in the series, you’ll have a general idea of what to expect from Serious Sam 4. It’s familiar but bigger, faster, and more ridiculous than before. The series has always been about fighting hordes of enemies but this one really turns things up to 11. There are 15 levels and most of them are enormous. Unlike previous entries, there’s a waypoint onscreen at all times telling you where to go, but the areas are typically wide open and packed with secrets and sidequests that get their own markers. Some of the levels are so huge that you can pick a direction and run in it for miles and miles without ever hitting any sort of barrier.

As Sam, you make your way through these levels and fight enemies on the way while making sure to resupply as needed. That’s about it, which is all a game like this needs. The levels have an ebb and flow where you go from fighting multiple waves of enemies to a few minutes of quiet before finding yourself in another giant fight. Sidequests reward Sam with useful gadgets that aren’t all that necessary even if they can absolutely turn the tide. Regardless, these are worth it because they contain their own unique enemy waves, which is the whole point of playing the game to begin with.

Combat in Serious Sam 4 is everything I’ve ever wanted from the series and more. Sam is faster and more nimble than ever and the guns are an absolute delight to shoot. The enemies are exceptionally quick and dangerous too, so you’ll need to be on your toes, so it helps that the controls are extremely responsive and completely up to the task of letting you do what you need to. It really just plays like a faster, bigger and more responsive version of the First and Second Encounters, mixed with certain elements from the third game. 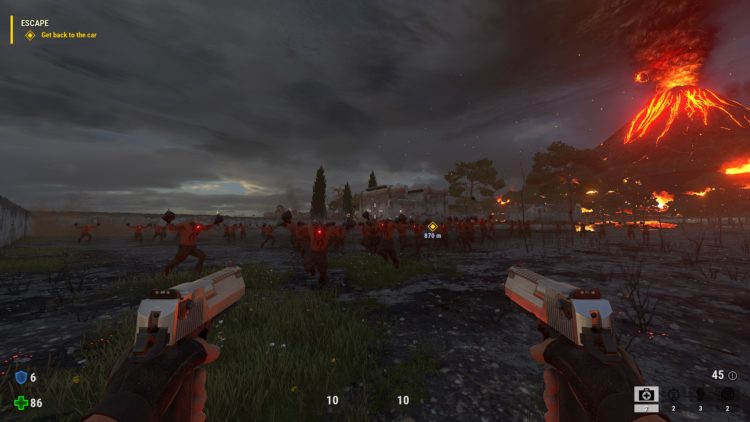 In a bit of a pivot for the series, Serious Sam 4 gives you access to skill trees. Sam finds purple Sirian orbs in boxes that give him a skill point. Putting these skills into trees will allow him several new abilities. My favorite of these is that Sam can now dual-wield everything in his arsenal at all times. Light weapons, medium weapons, heavy weapons, it doesn’t matter. What’s more, he can mix and match any two, which is insanely useful when you’re up duking it out with enemies of two different types and there just isn’t much time to swap between weapons.

Mixing and matching your weapons becomes practically necessary by the end of the game. Dual-wielding assault rifles is great for a lot of things, but being able to use an assault rifle on kamikazes and the cannon on enemies lobbing rockets at you is a literal lifesaver. Other skills increase Sam’s damage when his health is low, allow him to melee any enemy, and even allow him to ride werebulls and Khnums. You won’t have enough skill points to allocate to all of these but they can be refunded and used however you see fit if you want to try a different approach.

The enemies in Serious Sam 4 are as great as ever too. Many favorites are back, and the kamikaze and kleers are still incredibly annoying. Sam’s arsenal is similarly excellent, even if I’m a bit miffed that the flamethrower isn’t back, as it was one of my favorites. It’s a blast to switch between weapons based on what ammo the game gives you while keeping the hordes at bay. There are few things quite as visceral as making a stand at a choke point and shooting so much that you barely have time to breathe, only for the dust to settle and chunks of your destroyed foes to cover the ground around you. Games don’t come much more metal than this. That being said, I started to get a bit bored by the end, as the endless arena fights did start to wear on me. Of course, I’m the one who chose to do every sidequest I could find, so that’s partially on me. 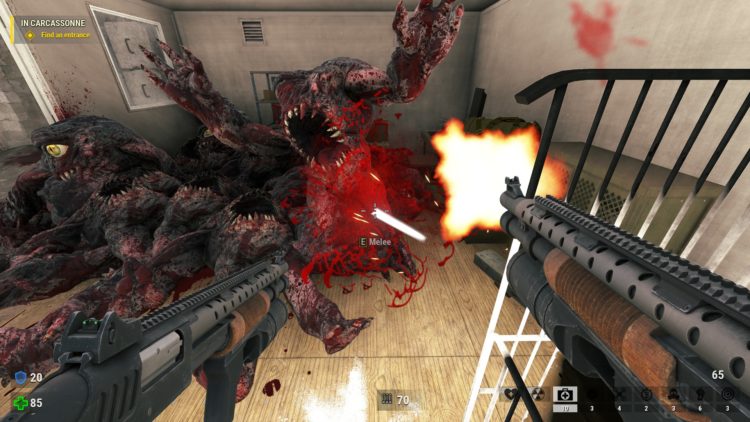 A bit of jank here and there

Surprisingly, Serious Sam 4 is a very demanding game. With a 5700 XT, I had to do some serious tinkering to get the game to play more smoothly at 1080p. And even then I’d often have my FPS fluctuating in the 40s. It’s due to the huge amount of enemies onscreen and gigantic level sizes, I’d wager, but it’s still somewhat curious. The game’s graphics are good, with the cities of Rome and Carcassone brought to life with a fair amount of accurate character. Enemy models are much improved as well, but the character models used in cutscenes are stiff and quite dated. There’s also a lot of pop-in and some low-res textures on display on occasion. It doesn’t quite look like a AAA game but it’s solid in its own right.

Speaking of having tons of enemies onscreen, Serious Sam 4‘s Legion System where enormous battles take place was significantly overhyped, as it amounts to just a few minutes of gameplay, most of which is just a backdrop for an insanely giant final boss battle. It looks good and doesn’t tank the framerate as much as you’d think, but it’s curious that they didn’t try to do anything more with it than use it for such a tiny part of the game. You also pilot a mech and other vehicles, such as a motorcycle and ATV, and these segments are fine, if similarly uncommon. You only use a mech three times in the whole game. There’s even a part where you shred enemies with a combine harvester. Yeah.

Overall, Serious Sam 4 will take about 13 hours on normal if you do all the sidequests and if you don’t die. Since this game is pretty tough, it’ll take many people double that once reloading is factored in. The difficulty mostly feels good, though. It doesn’t hesitate to absolutely murder you but it feels more consistent and fair than the classic games in the series did, with less of a focus on teleporting enemies in behind you and finding them hiding around every corner. Plus there aren’t any hitscan attacks to infuriate you! That being said, I did find the occasional enemy wave to be unfair, such as one in the 13th level where you have to fight werebulls, attack choppers, flying flamethrower guys, and melee peons simultaneously. Some of these can feel borderline impossible, especially when they don’t give you enough health or ammo to deal with your foes. As I said, though, these aren’t especially common and they don’t detract much from the overall experience. 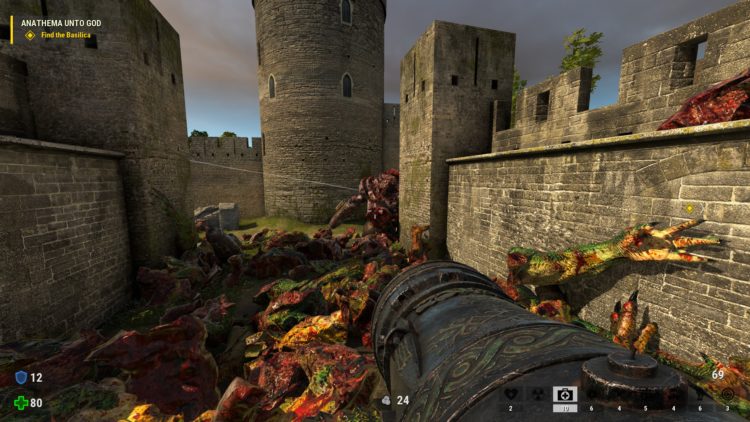 Back to the Future

Serious Sam 4 overpromised a bit in terms of the Legion System and mech fights. There also aren’t many boss battles and there’s a certain amount of jankiness to the presentation. But it’s an extremely entertaining game that stands as my favorite game in the series and one of the best action games money can buy. It’s fast, violent, and extremely stupid. And I don’t think I’d have it any other way. It’s been a long time coming, but Sam is back, and wiping out the hordes has never been better. 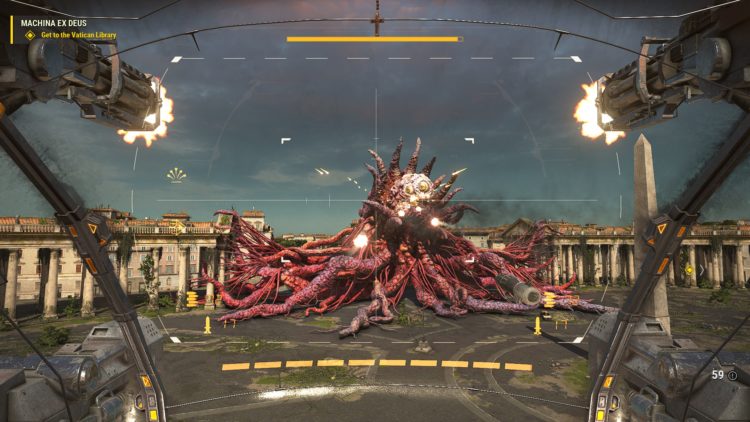 Serious Sam 4 has everything fans of the series could want and more. The fights are chaotic and extremely violent and the gunplay is the best its ever been. It can get a bit redundant and it overpromised on certain features, but anyone looking to demolish thousands of aliens will find tons to love here.

Official Fall Guys toys and collectables are in production