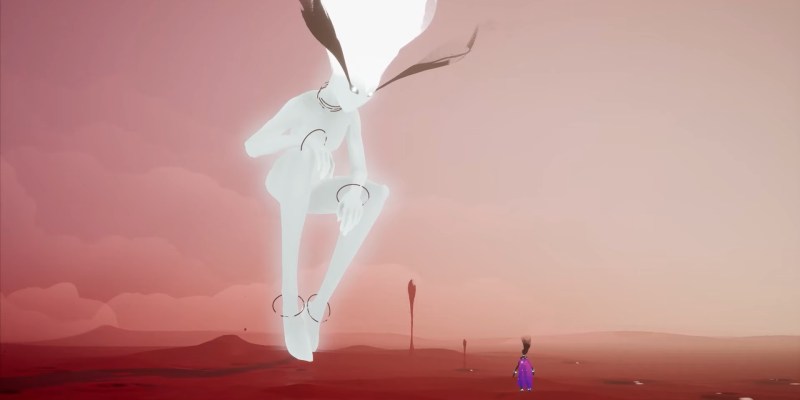 I have a feeling it'll be worth the wait.

I regret not having played Hyper Light Drifter, because its developer’s latest game almost appears to be a spiritual follow up to it. And it looks really damn good. Solar Ash, announced nearly two years ago, seems to exist in the same spirit as Hyper Light but in full 3D. The gameplay walkthrough trailer for Solar Ash came earlier today during Sony’s State of Play. The third-person action game is gorgeous and shining with color, swarming with monsters to kill.

Alx Preston, the creative director of the game, talks us through the gameplay of Solar Ash. It’s very much an action-focused platformer, and an uncomplicated one at that. Preston points out the game’s simplicity in combat, which is no surprise considering Hyper Light Drifter‘s low-key combat. Attacks are swift and fluid, with most standard enemies going down in about a single hit. There’s also a major focus on speed and platforming. The protagonist can jump, double jump, slide, and use a grapple to cross large gaps. There’s also some rail grinding, which looks to give Sonic the Hedgehog a run for his money.

The world in Solar Ash is dying, and you can see it in the environmental design. Blackish-red sludge is oozing out of the world, almost like blood from a gaping wound. But it does seem like you can use the slime to your advantage. In the Solar Ash gameplay trailer, we see the protagonist latch onto the ooze. There’s a good chance you’ll be able to clamber up buildings or scale walls this way.

Travelling through a dying world

Remember those smaller enemies from before? The ones that died in one hit? Well, you should count those as “practice enemies,” because Solar Ash has some tougher foes to test your mettle. The game will include boss battles, some of them are clearly going to be massive. Near the end of the trailer is a fight against a giant snake, which instantly gave me Shadow of the Colossus vibes.

Overall, Solar Ash is looking amazing. The game, coming to us from developer Heart Machine, will be out later this year on PC via the Epic Games Store.