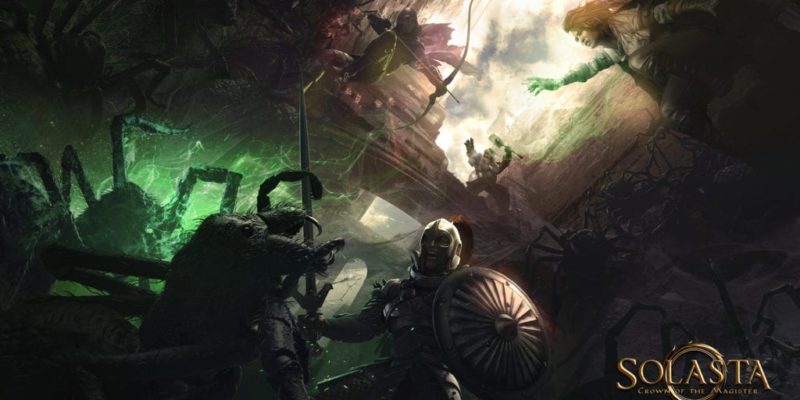 If you’ve been on the hunt for a tactical role-playing game that pulls together the best parts of PC RPGs and tabletop RPGs, Solasta: Crown of the Magister might be worth rolling a perception check on. Today, a new trailer for the game was released, along with the announcement of a one-month Kickstarter campaign. There is also a new one-hour long demo available on Steam to celebrate.

The game will feature a large range of races, classes, and backgrounds for building a party. In true tabletop fashion, players can roll for stats when setting up their characters, but that doesn’t seem to be the only way to spec out your character in Solasta. Every member of the four-person party is said to play a large role in the adventure.

Solasta: Crown of the Magister is an isometric tactical RPG that takes advantage of the 3D world by enabling the player to move vertically. Battlements can be climbed during combat to give advantages in attack, while tunnels can be crawled through to sneak around enemies or environmental hazards. Solasta certainly isn’t the first to do this (as Divinity: Original Sin II has similar features), but it’s an aspect that would be great to see in more role-playing games. The use of light will play a major role in the game as well. It will help you explore dungeons and other dark places, though it can also serve as a beacon of your location to enemies.

“Locations can be explored by climbing walls, flying, teleporting, crawling through tunnels, finding secret passages, or falling through unstable ground, allowing the player to use the environment to take on encounters in multiple different ways”

To aid in development costs, Tactical Adventures (creators of Solasta) has opened up a Kickstarter campaign. The team is asking for a little under $200,000 before October 4. As of right now, the team has already managed to bring in around $20,000 from over 550 backers. There is also a free, one-hour demo of Solasta: Crown of the Magister on Steam that you can try before pledging to the Kickstarter. In it, you will control a party of four pre-made characters on a quick adventure in Solasta. It might not be a very long demo, but it should be enough to let you know if this game is worth adding to your watchlist.