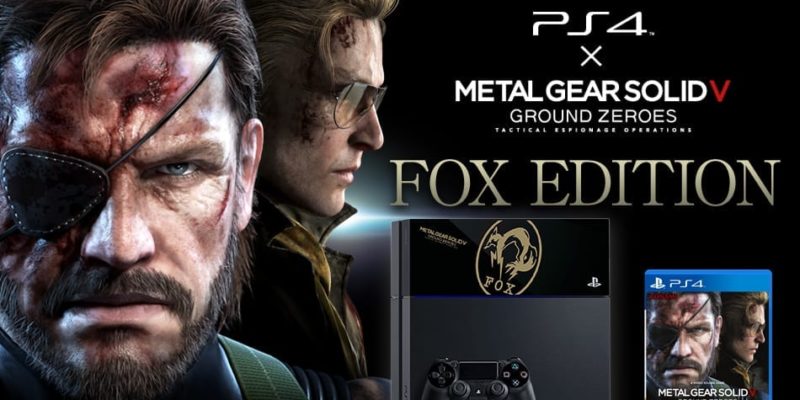 A few days ago we ran an article explaining how Metal Gear Solid creator, Hideo Kojima, had been tweeting pics of special edition Metal Gear Solid consoles such as the MGS4 PS4 and the Peace Walker PSP. We further speculated that perhaps Kojima was hinting at the possibility of an upcoming Metal Gear Solid themed PS4 to mark the release of Metal Gear Solid V: Ground Zeroes and also The Phantom Pain.

Well it looks like we were right as Sony has just announced that a limited edition Metal Gear Solid PS4 is going to be released in Japan. The console will be called PS4xMetal Gear Solid: Ground Zeroes Fox Edition and will be part of a bundle that includes the console, controller, and a copy of Ground Zeroes on PS4.

The PS4 itself will be the same as every other PS4 in terms of tech but will feature a FOX emblem in gold as well as the logo across the side of the PS4. The game will cost 46,980 yen which comes to $462 or £275 and can be purchased from Sony’s Japanese store

Hideo Kojima gave a quick Tweet as to how the console came to be:

“When I had dinner with Sony Computer Entertainment’s Hiroshi Kawano last year he said “Indeed, we really want a Metal Gear limited edition PS4, don’t you think?” Due to that love call, we started to move in a hurry. Since we didn’t have much time, the announcement came at the last moment. I apologize. This picture shows samples, not the retail version.”

As it stands, there is no news on whether or not this PS4 will be coming to the West but we can live in hope! Check out some more pics below.

Microsoft Deny Coming Second To The PS4 In Australia