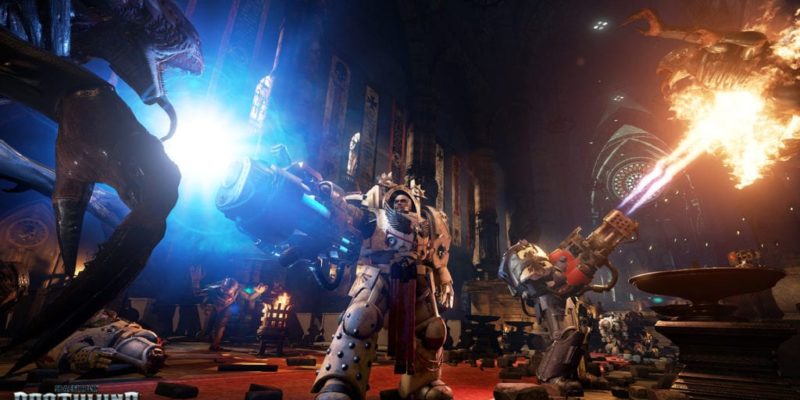 As I keep mentioning whenever Space Hulk: Deathwing gets brought up, the game is being developed by Streum On – the same studio who made the wonderfully nuts EYE: Divine Cybermancy.

And really, if you’re going to contract anybody to make a Warhammer 40K FPS, it may as well be a team who previously made a game with ‘Divine Cybermancy’ as the sub-header.

I’ve got a new reason to be sort of enthused for Space Hulk: Deathwing too; the story is being written by Games Workshop’s Gav Thorpe. That’s a name I remember from my mid-90s Warhammering days, and a chap who very much knows his background fluff.

A few more bits and pieces about the game are mentioned in this latest briefing too. There’ll be both solo play and co-operative team play modes, with the latter demanding “clever use of squad tactics” and use of each team member’s specialised role. In single player, you’ll be playing as the squad’s Librarian (it’s a Warhammer 40K thing, you’re not hunting overdue books) and dishing out psychic assaults on the genestealers.

Even in single player though, you’ll be giving orders to the rest of your squad and making sure doorways and flanks are secure.

Apparently, Streum On have developed some dynamic AI systems for Space Hulk: Deathwing, which will scale attacks depending on the ability of the player squad. If you start doing a bit too well, it’ll throw more Genestealers at your face.