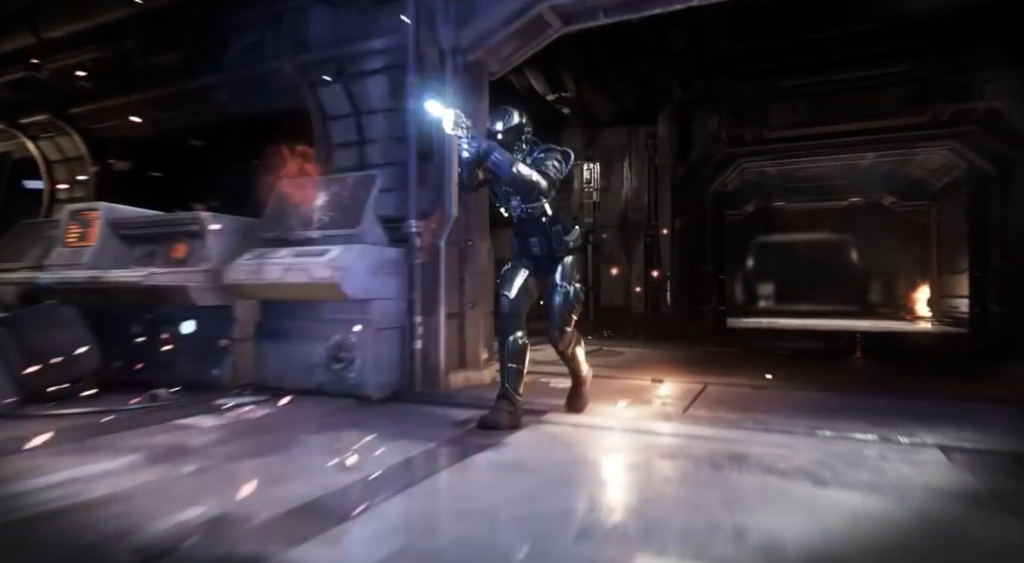 I know, this isn’t first person. But it’s from the FPS module teaser.

Now look, I don’t want to be too skeptical about all of this but a new Reddit AMA with the team behind the FPS portions of Star Citizen has set off the Molyneux alarm. The IncGamers team has mixed views on whether Star Citizen will ultimately deliver on its wildly ambitious vision, but I can say that we’d all like it to succeed. Paul has even backed the game.

But some of these question responses by the ‘Redacted’ studio (an on-going joke, they’re pretty much confirmed to be Denver-based IllFonic,) are sliding into the “sounds far too good to be true” category.

Have a look at this imagined scenario, in reply to somebody asking what the FPS gameplay in the persistent universe will be like:

I’m a stealthy, solo player. I find a wrecked ship, i know scavengers will be around soon. I find a crate and put myself in it. I let the scavengers take the crate and put me in their ship. When i’m on their ship, some time later, i get out of the crate. Very quietly, i rummage around and find some goodies i like. I steal those… now i can either – A) Jump out the airlock and call a ride or B) go to their engine room and self destruct their ship or C) quietly hunt and execute the entire staff and take their ship…. or Z) they could have scanned the crate properly before loading it, blasted it with their ship and me with it…

That sounds great! It also sounds quite unlikely. I’d always be dubious about the design constraints of that hypothetical, even if it was referring to a fully dedicated tactical FPS title.

Speaking of which, the FPS bits of Star Citizen are apparently going to draw heavy influence from games like Rainbow Six and Arma. The potential for one-hit kills, tactical, methodical gameplay. That sort of thing. You have to be careful what you’re shooting at in space, after all.

It’s worth noting the distinction between FPS portions that are ultimately planned for the persistent universe of Star Citizen and the dedicated FPS module. The latter is “like Arena Commander, its very specific maps/modes only, the FPS mechanics in the Persistent Universe is a lot different, which allows full freedom of players, exploration of social hubs/etc.” This part is said to be on track for a release early next year.

Here’s a summary of the kind of movement the FPS bits will offer, which again note that this will be a slower-paced affair.

Movement will have walk/run/sprint/crouch/prone/slide(on knees)/sidle/cover/leaning/peeking/climbing/etc. The movement is designed to discourage players going ballistic though, so its not super fast paced like COD games.

They say there will be a unified first and third-person camera (but a first person view only,) allowing for things like limb specific damage. Zero-G fighting is mentioned, as are different methods of boarding a vessel. Sneaking on board vs blasting through hatches, that kind of thing.

As with so many of Star Citizen’s lofty promises, the proof will come when the FPS module is actually released and (much later) once the persistent universe aspects are up and running. It all sounds really good. But with this game, it always does.

The Redacted/IllFonic team say they’ll be showing off some FPS work at PAX Australia, so that should reveal more.

Ten years later Aussies get their own World of Warcraft servers