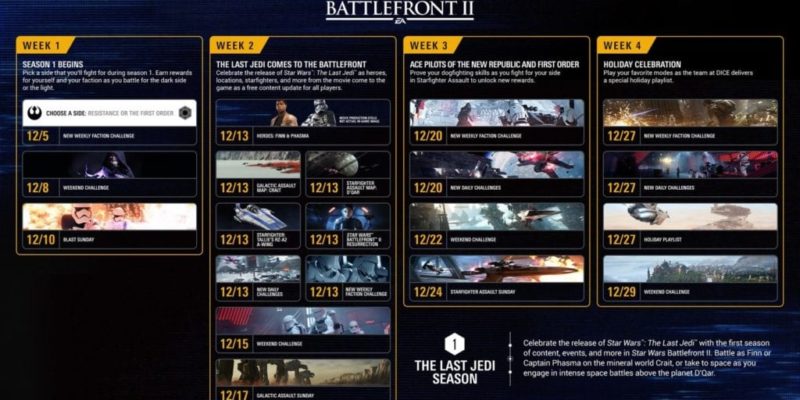 To be a bit more specific about all of that, on 5 December players will be invited to choose to align themselves with either the First Order (boo, hiss) or the Resistance. Depending on your choice, you’ll get faction specific rewards for taking part in some Battlefront 2 community challenges.

Then, on 13 December, Finn and Captain Phasma will be added as in-game playable characters. Both will be sold for in-game credits “that week”. And, whichever faction wins the community challenges that week will unlock a crate of rewards for the appropriate character. That date will also see the addition of a new planetary map (Crait) and a new Starfighter Assault map (D’qar). ‘Tallie Lintra’s RZ-2 A-wing’ will be added as a hero ship too.

13 December will bring a new chapter to the single player side of things as well. You’ll follow Iden Versio “during the days of the First Order’s rise to power.”

Beyond that, Week 3 (22 December) will be all about challenges (daily, weekend, etc) for Starfighter Assault. Week 4 (27 December) will continue in that manner with more community stuff and some special DICE holiday playlists.

Here’s an image laying all of that out (click for larger). Battlefront 2 is out worldwide on 17 November. You get to start early (14 Nov) if you have the Deluxe Edition.