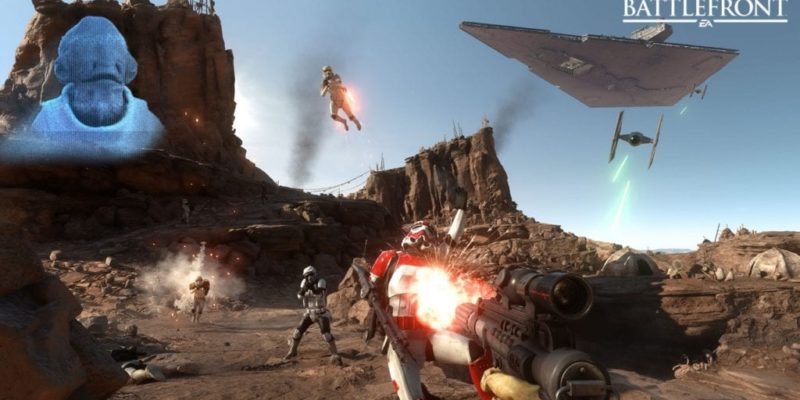 Star Wars: Battlefront won’t have a single player campaign. That’s not a new piece of information. Since its announcement there’s been nary a peep about gallivanting through a sequence of Battlefront scenarios on your lonesome. But perhaps some were still holding out for a last minute surprise.

EA’s Peter Moore has made it clear that’s not going to be the case, defending the lack of a single player campaign in Star Wars: Battlefront by appealing to empirical statistics.

“Very few people actually play the single-player on these kinds of games”, he told GameSpot. “That’s what the data points to.”

Vader shakes his fist, lamenting a single player boss battle that couldn’t been.

Basing decisions about what to include in creative endeavours on popularity alone is a sure way to wind up with a bland, unchallenged hegemony. A sort of corporate-art sludge. But quite apart from this, I wish Moore had been pushed to expand further on his statement.

By “these kinds of games” we can only assume he means Battlefield titles. EA are unlikely to have access to any Call of Duty data, and, if they do, Activision should probably do a couple of server passes with Malwarebytes sooner rather than later.

Solid figures on any of this are borderline-impossible to get hold of because larger videogame companies guard this stuff like jealous magpies. But whenever anybody bothers to ask the latest CoD developer why they still bother with single player, they give the impression it’s because people still want it.

Son, let me give you my sincerest military assurance that Black Ops 3 will have a single player campaign.

Treyarch’s Mark Lamia certainly gave that sense when Kotaku asked him about it in 2012. “We have a whole team that’s focused on creating the campaign. It’s what we do. It’s what we want to create,” he told them.

“[Different modes of play] all cater to different emotional states,” was Lamia’s belief. “When you’re playing the campaign, you’re sitting down to have that sort of epic and cinematic experience, right?”

That was three years ago, but the fact that Call of Duty still runs with a single player section and shows no signs of dropping it must indicate something different spilling out of the data spools over at Activision.

Maybe Moore’s conclusion that people don’t play single player in “these kinds of games” is the wrong one. Perhaps he should instead be wondering why people aren’t playing much single player in EA’s shooters. 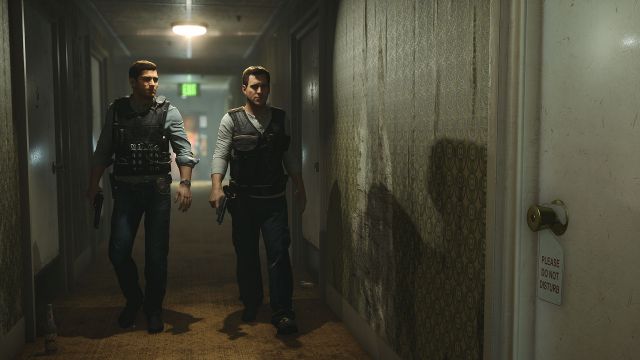 If you’re not careful, you end up with another one of these.

Battlefield’s latest campaign efforts have been a cavalcade of forgettable noise, so players could certainly be forgiven for giving up on them. It seems a long, long time since Bad Company.

EA still had enough faith in single player to include the option in Battlefield: Hardline, but perhaps that one got the go-ahead before Moore received his latest batch of metrics. In which case we were close to being spared one campaign that probably wouldn’t have been missed.

That’s the curious thing about single player modes in shooters, though. Whenever a studio does choose to launch without one (as Respawn’s EA-published Titanfall opted to do), you suddenly get people wondering where it is, and whether this $60 USD package is really worth it if they can’t spend five or six of 80+ total hours taking potshots at some idiot AI while a celebrity voice yells “follow me!”

The type of lousy reviewer who mistakenly equates value to some sort of feature checklist gets upset too, and before you know it the precious metacritic score has shed a percentage mark or three. All because you focused on the modes you thought were most appropriate for your game instead of wasting time coding some boring set-pieces starring explosions and pathos. You fools!

It could’ve had an interesting alien protagonist and everything! Or it might have been bobbins.

“We’re worried not many people will play it” isn’t a good reason to leave a single player mode out of Star Wars: Battlefront. It just shows a lack of confidence in your studio to make something so extraordinary people couldn’t help but play it. But nor is “well people are expecting one, so we’ll bung it in there” a good reason for inclusion.

Despite all the trauma it has undergone in the past couple of decades, the Star Wars universe clearly still has the potential for a decent single player story. Games like Knights of the Old Republic 2 show that unexpected life can be breathed into a world that most people probably feel over-familiar with at this point. Whether a Star Wars: Battlefront game is the best place to try this, though, is another question. Nor is it clear how difficult it would now be to get Disney to sign off on narrative choices anywhere outside the norm.

Recent Battlefield campaigns don’t inspire confidence that a hypothetical Star Wars: Battlefront campaign would actually be any good; and that’s really the only consideration players should have when celebrating or lamenting its absence. Moore’s data doesn’t necessarily show people getting tired of single player modes in the overall shooter ‘package’. But it may just show more people capable of exhibiting sound judgment when it comes to EA’s recent campaign efforts.

In order to gather some data of our own about interest in single player campaigns, we’ve put together a straightforward poll.

Elite: Dangerous CQC PC beta planned “within the next couple of weeks”