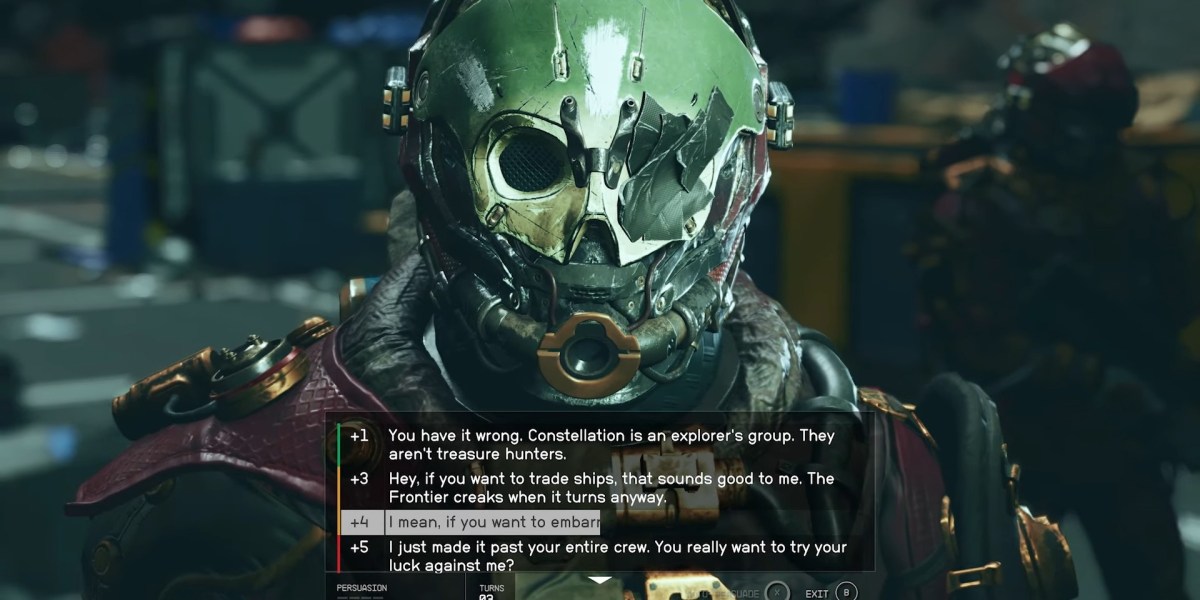 Those who have played enough Bethesda’s RPGs know that a good chunk of that time is done through conversations. You tend to go from NPC to NPC, accepting or returning quests, or gathering more information. Sometimes you’ll chat up a shopkeeper, other times a king. There are a lot of spoken lines of dialogue in franchises like The Elder Scrolls or Fallout, but Starfield is set to eclipse both. In a Q&A video, Game Director Todd Howard revealed how chatty folks in Starfield will be, as well as revealing the persuasion system used in said conversations.

So, how much dialogue are we talking in Starfield? Well, if you happened to read the headline, that number is over 250,000 spoken lines. For reference, Bethesda Game Studio’s last major RPG release, Fallout 4, contained more than 111,000 lines of spoken dialogue. Skyrim, on the other hand, had more than 60,000. Yes, there’s that many, and yet the “Some may call this junk” line remains permanently etched into my brain.

Starfield also brings back the old persuasion system, revealed today in the video. For those who don’t recall, Bethesda had played with the idea of a system that allowed players to persuade NPCs during conversations. It didn’t always work so well, and was the subject of some criticism in Oblivion.

However, Howard clearly believes it’ll shine in Starfield. Calling it a “classic Bethesda-style dialogue,” Howard states the persuasion system of Starfield will allow players to make better choices in conversation. You’ll have points to spend in conversation, and it appears the more points you spend the riskier the bet. And you may only have so many turns to get NPCs to see things from your angle. Persuading, however, may be a safer option than letting your guns do the talking.

“It feels like it’s part of the dialogue but you’re spending points to persuade them,” Howard explains. “It feels natural, not like I’ve entered some other mode where I’m not doing regular dialogue and I’m in this mode of persuading you to get what I want.”

The system will clue you in on how dialogue choices are impacting the conversation. Howard says you can watch for body language, or “how [NPCs] emote.” Facial expressions are certainly a part of this, but I wonder how that will work when the person you’re speaking with is wearing a helmet. In other Starfield news, the video also goes into detail in how the ships work. Howard explains that the rules of the game use Bethesda’s modified definition of “hard science fiction.” In other words, while your ship has fuel, you can’t run out and become stranded in space. Why? Well, as Howard explains, it’s because it’s a video game. Getting stuck somewhere in the black doesn’t really equate to a fun time. Your ship, when traveling, bends space in order to move distances. So, kind of like in Futurama or, perhaps, Event Horizon. Your fuel supply instead dictates how far your ship can travel.

We’ll certainly see how the systems work when Starfield launches next year.

Witchfire gets delayed to 2023 as open-world combat is added