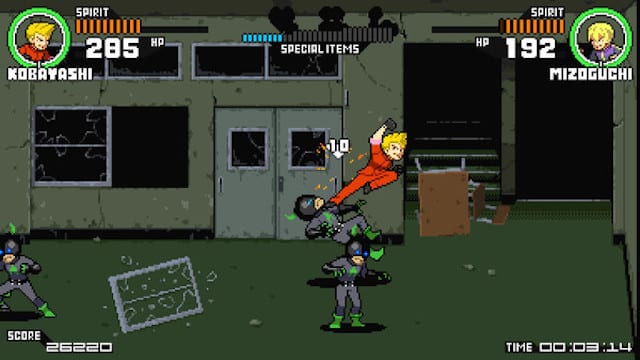 As if River City Girls and the other Kunio-Kun games weren’t enough to keep players busy, there’s a new hero on the horizon. Say hello to the mighty Kobayashi-San!

Arc System Works has announced the launch of Stay Cool, Kobayashi-San!, a goofy spin-off from the River City Ransom universe. Available now on Steam, the game brings a lot of beat-em-up thrills and a sleek art design.

What Kobayashi-San is all about

The game is essentially a “time-traveling beat-em-up set in the Kunio-Kun universe,” according to the developers. Masao Kobayashi teams up with “the boy from the future, Kouki Mizoguchi,” in the hopes of defeating enemies and stopping an evil organization. So how will he do that, you ask? With his powerful moves!

Kobayashi-San! features a “fun open-ended” experience, where players will come across different types of enemies. Normal attacks can be put together with special moves, jump attacks, and juggle hits, creating an elaborate combo system. The game also gives you the ability to switch between characters at any time, thus mixing things up even further.

What’s more, Kobayashi-San! benefits from a variety of different endings. Over the course of the game, you’ll make key decisions that change the fate of your characters. You can also tweak them however you see fit, using the character creation system.

With local cooperative action for up to two players, Stay Cool, Kobayashi-San!: A River City Ransom Story looks to be a lot of fun. The trailer below definitely gets the proper mood going for it, including an explanation of the fighting system. Check it out, and don’t forget to “stay cool.” (How could you not with Kobayashi-san’s amazing hair?!)

The game is now available for purchase on Steam, going for the low price of $13.99. That’s a great price for the beat-em-up goofiness that awaits you here.

Weird western Ritual: Crown of Horns is out today