Skyrim modders can now make cash from their creations, but not everyone is happy about it.

The wonderful thing about PC gaming is the ability to enhance a game after release with mods. Some of the most popular PC games such as World of Warcraft and the more recently released Cities: Skylines encourage players to create new content for the community. Adding a financial reward for what can sometimes be a lot of work can change the modding landscape.

Valve’s paid mod system relies on the community checking over all submissions before the mod can be placed on the open market for sale. Will this cause problems? More than likely, with claims of ownership or copyright infringement.

Many moons ago I used to run one of the first World of Warcraft mod sites which grew to quite a substantial size. It was hard work keeping the site alive and adding features for both mod makers and users; there was a lot of administration just to keep the site online and checking all submitted files. There was also the problem of mods being submitted by users that didn’t actually create the mod, or the submitted mod being a slightly different reworked versions of an existing mod.

Over time it became a nightmare trying to settle disputes, which was one of the reasons I walked away from from the WoW modding community. There were unscrupulous users and mod makers that made it not worth the effort, and while their intentions were to enhance the game, it sometimes got ugly. 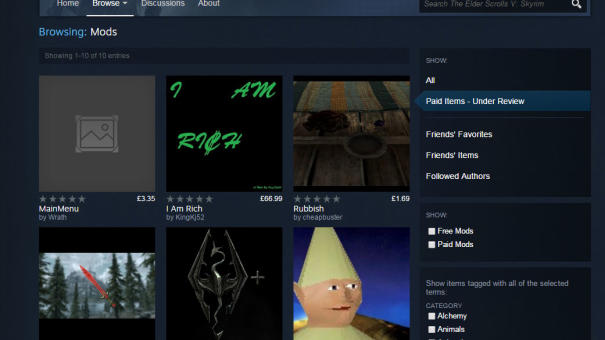 Now that mods for Skyrim can be sold, we’re already seeing similar issues arise with the community spotting mods that may include copyrighted work, or work that’s been lifted from an already existing mod.

Should a mod that does this receive all of the cash, when someone else’s effort has helped create the mod they are selling? Probably not, but it could end up being a nightmare to sort out such disputes, because – as I know all too well – some mod makers could make fictional claims over ownership of aspects of the work.

Skyrim mods, like many other games, can also be picked up from third party sites that allow mod authors to upload their files and distribute them for free. In the case of Skyrim this has been going on for some time on Nexus Mods, where mod creators can also ask for a donation for their work. On the Steam Workshop, mod creators will currently only receive 25% of the sale, and they could probably make some (if not more) cash if they were to simply ask for donations. That’s one way of monetising mods while also keeping the community on your side.

Should mod authors be entitled to payment for their work? If it’s original work then they should ask the community to chip in. This comment on the Skyforge Weapons mod from that mod’s creator looks at the issue of charging from a modder’s perspective:

“The three Skyrim mods I have created that highlight 100% original artwork (Skyforge Shields, Skyforge Weapons, and Dovahmaar and Dovahfaas) involved a substantial investment in personal time and creativity (more often than not while I was unemployed and without income whatsoever). For over two years now, the fruits of those efforts have been available free to public. A great many people have enjoyed my work, and I’m grateful for their kind words and appreciation. However, at this stage, I don’t believe it’s unreasonable for to begin to ask a small amount in exchange for my (proven, I believe) efforts.”

Another comment from Giskard explains why he removed his mods from Steam last year:

“Fact is though, Steam has proven time and time again it simply does not understand modders or the modding community. This is just the latest bit of proof that the concept of a fun hobby is beyond them. I removed my work from Steam last year because I felt they wanted the benefit of hosting mods without wanting to give modders the support we expect. So I walked away.

“Sadly this charging for mods opens the door to flaming, court cases, fraud and reasons to steal mods to make a buck.

“But it is also an opportunity, you’re going to find out who the real modders are, you’re going consider it a badge of honour to be a free mod maker. And hopefully you’re going to treat us better than you have been because if you don’t, we can always sell our mods and become rich at your expense.”

These are two slightly different views on how mods should be distributed and how mod makers should be compensated and it’s easy to sympathise with both. (Editor’s note: the quotes were cleaned up a little with regards to spelling and grammar, but the actual content and word choice remains untouched.) 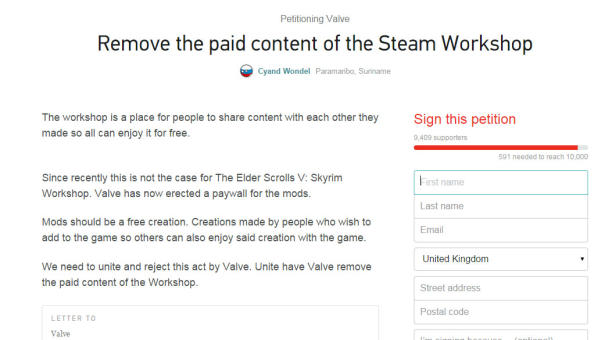 Don’t like the current paid mods system? Then you can always try the petition.

This evening the Skyrim community has rallied against paid mods. A petition to remove paid content from the Steam Workshop has already been created and has reached nearly 10,000 signatures in a very short space of time, and a Community Group has been set up on Steam which explains what the community are concerned about and what they would be happy to accept as an alternative:

The Steam community are letting their thoughts on the paid Workshop be known with the following image and mod comment pages are being flooded with this, especially on mods that are deemed to be overpriced by players or which are variations on existing mods.

One of the most prolific games that has seen a huge influx of mods is Cities: Skylines. There are now more than 36,000 mods in the Cities: Skylines database, and some of these are reworkings of either existing mods or assets created by other players. There’s also the issue of copyright, as some Cities: Skylines mods actually use real world company branding. If Paradox introduced the system into their Steam Workshop, things could get ugly fast.

Some mod makers such as Gula, who has created some great Cities: Skylines assets after leaving Maxis. decided to setup a Patreon page which has proved popular and enabled him to finance the creation of new buildings. If enough players chip in and reach his targets, the whole community benefits from the release of the new content. It’s just another way mod makers can monetise their work while keeping the whole community happy.

This debate is likely to go on for the next few days but it will be interesting to see if Valve respond or make changes to the paid content system. I won’t hold my breath though.

PC gamers would obviously prefer to have access to free content (don’t we all?) but there is definitely an argument that creators of substantial mods should be able to earn some cash from their work. A donations system appears to be a good middle ground.