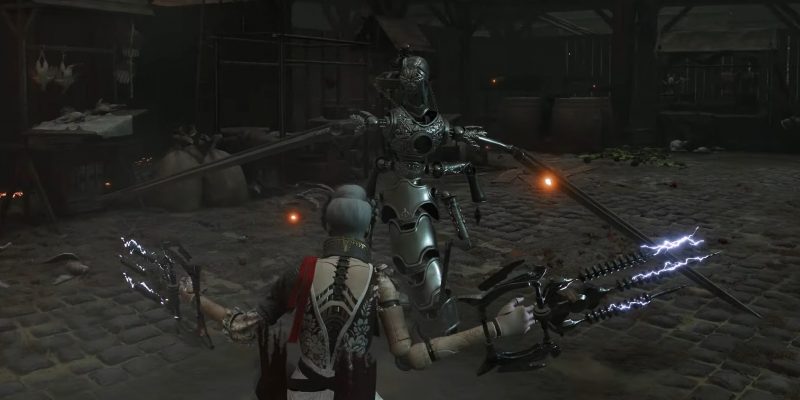 Steelrising, a more robotic take on the French Revolution, was revealed during the last Nacon Connect a year ago. Yesterday, however, at Nacon Connect 2021, we finally got a gameplay trailer for Steelrising, and it’s living up to expectations. Of course, robot fisticuffs on the streets of 18-century Paris should have but one expectation: that it’ll be pretty badass. And it’s certainly looking that way.

Gameplay in Steelrising does invoke some Dark Souls feels, but with a bit more flair. The game sits its camera in third person behind your back, as you rush forward swinging an assortment of weapons. Swords, giant axes, and bladed fans are on display; you’ll have plenty of options in your choice of pointy objects to wield. There are also other abilities shown, such as fire and lightning. Combat looks swift, with more acrobatic moves at your disposal — such as jumping and dashing. There could be an equivalent to Weapon Arts, as we see the fans being used to fling daggers one moment, and turn into a shield in another.

There is a stiffness to the fights, however. That may hint at the game’s current development state (its release is still TBD), or the fact that you play a robot yourself. So, it could be intentional, but it’s hard to say for now. Hopefully the stiffness of movement is by design, otherwise it might hinder combat. Naturally, it’s too early to say, as developer Spiders (Greedfall, Technomancer), is still plunking away at the game. Check out the Steelrising gameplay trailer below and come up with your own wild, possibly incorrect, theories:

Steelrising tells an alternate story of the French Revolution, which you probably picked up on with all the robots. It still features famous historical figures like King Louis XVI and Queen Marie-Antoinette. However, in their disagreement, the queen sends Aegis, one of her robotic guards, to deal with the rowdy king and stop the automaton army.

The Steelrising page is live on Steam, but so far is a little sparse on details. We’ll have more when we know more.

Microsoft plans to compete with DLSS, FSR, and other resolution upscaling tech