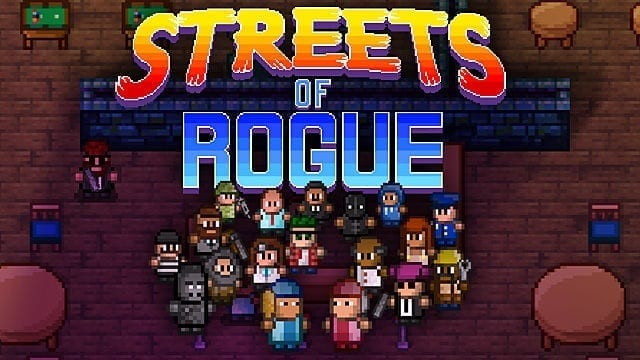 I love games that offer player agency above any other feature. That seems to be the case of Streets of Rogue, which is coming out of Early Access today after over two years in development. The game’s top description on the Steam page makes it seem like a really cool game: “It’s like Nuclear Throne meets Deus Ex, mixed with the anarchy of GTA. Rogue-lite meets immersive sim, and goes completely insane.” It’s definitely a tall order to match up to the likes of Deus Ex and Grand Theft Auto, but judging from the game’s “Overwhelmingly Positive” Steam score, it looks like it does indeed. Of course, this is a 2D pixelated roguelike game, but as long as the gameplay feels similar in some ways, the perspective doesn’t really mean much.

Streets of Rogue also takes inspiration from fast-paced top-down roguelike game The Binding of Isaac, except with more free-form style and experimentation-driven emergent gameplay elements of the ultra classic Deus Ex. Streets of Rogue takes place in a functioning and procedurally generated city, where complex AI systems inform its denizens as they try to get by in their daily activities. In order to progress through this city and its systems, you must accomplish specific mission goals in any possible way you can devise through your special character traits, items, and the environment.

Streets of Rogue classes and features

You can play as a soldier who shoots first and asks questions later if you want. There’s also the option of a stealthy doctor, using chloroform and tranquilizer darts, to take down the opposition unawares. Maybe you’re more of a charismatic bartender, able to talk your way past the most intimidating guards and thugs? Perhaps even a hyper-intelligent gorilla, so you can rescue other caged gorillas and make your own Planet of the Apes? Streets of Rogue features over 20 wildly different character types and classes to pick from. Scientists, hackers, you name it, maybe even your real-life job.

And you can always play it your way, not killing anybody, just hacking your way out. The developers guarantee even 600 hours of playtime with ample variety in gameplay. The AI is also very advanced, and you’ll really feel like you’re working to outsmart the virtual humans. A huge variety of items allows you to shoot shrink rays, hypnotize your opponents, or set bear traps everywhere. And obviously, a lot of guns too. You can play Streets of Rogue on your own or in 4-player online and local co-op modes. Lead a gang, free slaves, drink beer, become a vampire, shrink people, and then stomp on them. The developers promise the “most insanely varied game ever made.”

Streets of Rogue is available on PC via Steam and on Nintendo Switch now.