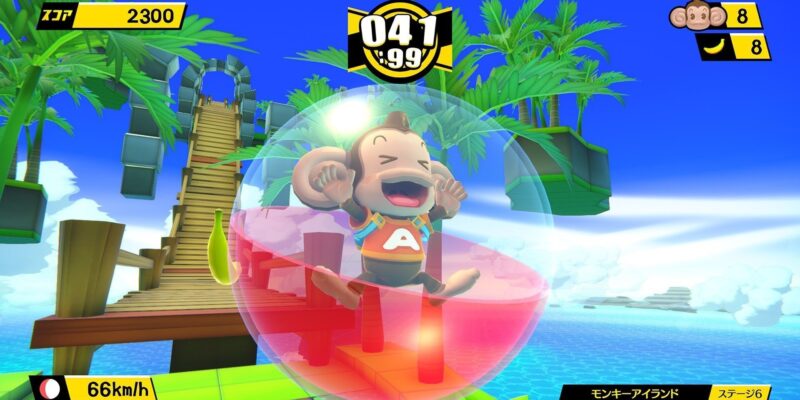 Most of the trailer shows off levels that fans of the series are no doubt happy to see returning, including several that did not appear in the debut trailer. Nearly all of the ridiculously elaborate background designs from Super Monkey Ball 2 and Super Monkey Ball Deluxe make an appearance in the trailer, and they certainly look snazzier in this game thanks to the visual upgrade.

In addition to the levels, the trailer very briefly reveals what players should expect to see in the story mode. It briefly plays a cutscene featuring animated stills of AiAi and the gang chasing after Dr. Bad-Boon, the antagonist from Super Monkey Ball 2. That game’s story mode provided value more for its lack of a lives system than its cutscenes and plot, especially since those scenes could be pretty embarrassing to watch around other people, but those who liked the second game’s story will likely be happy to see it return in some form.

It remains unclear whether the new story mode will feature the same story events as Super Monkey Ball 2. The cutscene in the trailer showed characters that did not appear in that game and lacked the fully animated style of old. But since the story still depicts Dr. Bad-Boon and his nefarious schemes, players can probably expect to see more magical monkey spells, cloned robots, and uncomfortable bath scenes.

Although Super Monkey Ball Banana Mania does not offer new levels, it still comes off as a refreshing return to form after years of sequels that strayed away from the appeal of the original games. And the trailer certainly gives longtime fans more to be excited about. The original Super Monkey Ball games feature some of the craziest physics and bite-sized stages out there, so those interested should definitely check out the remaster once it arrives on October 5.

SuchArt: Genius Artist Simulator Early Access — Is it worth it?