Shocking news, everyone! For once, this isn’t going to be a review with the typical episodic disclaimer of “it seems okay, but it all comes down to how the other episodes turn out blah blah blah.” There’s still some truth in that for Tales from the Borderlands – there’s no way to buy just one episode on PC, so I can still only review a fifth of what we’re actually paying for – but I have some concrete opinions about that fifth. 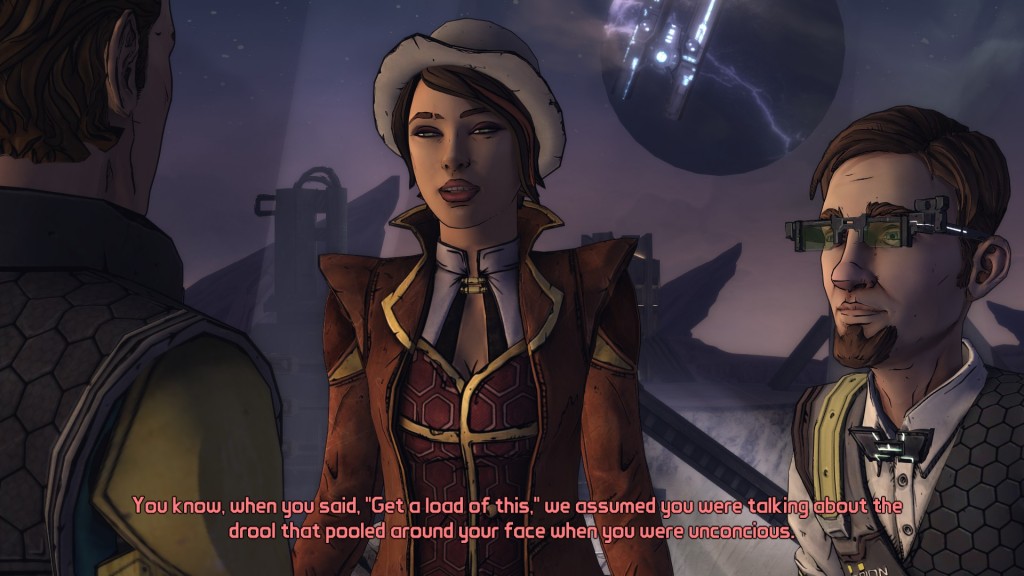 Fiona and Rhys don’t have the most… friendly working relationship.

In large part, the fact that I have opinions comes down to the fact that this episode actually stands alone really, really well. It makes me think of a feature-length pilot episode for a TV series: it introduces the characters and their relationships, gives them a problem, and has them deal with that problem while setting up for future episodes. Also, it lasts about two hours.

The characters in question are Rhys and Fiona. Rhys is a Hyperion company man living a comfortable life on Hyperion’s orbiting space station and jockeying for position in the wake of Borderlands 2‘s ending. When his rival gets promoted ahead of him and makes his life a living hell, Rhys resolves to screw over that rival by ruining said rival’s business deal on Pandora. Fiona, on the other hand, is a Pandoran con-artist who has her own stake in that little business deal, and when their paths collide, they find themselves hunting after ten million dollars that went missing in the aftermath. 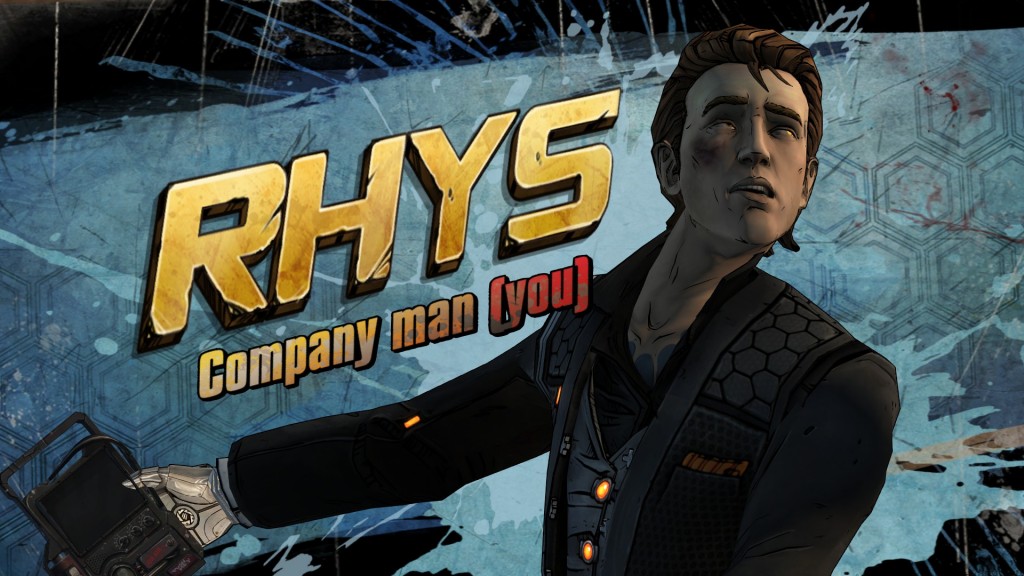 Yes, it still has these wonderful splash screens whenever a major new character is introduced.

Tales from the Borderlands is interesting for a few reasons. For one thing, it’s actually a direct sequel to Borderlands 2 rather than being a side-run story, so it gives us our first real glimpse at what happened after that game (unless Borderlands: The Pre-Sequel‘s title is a big lie, anyway; I haven’t played it). Secondly, it’s the first chance Telltale has had in ages to revel in comedy and farcical chaos (and over-the-top gore), and this is a chance they clearly relish. I’m a little relieved to see them doing something that isn’t horrible and bleak, and from this excellent opening episode, I’d guess they feel the same way.

It’s still obviously a Telltale game – it’s linear, choice-driven, and gives you very little room to explore or investigate outside of a few specific areas – but it’s also just as clearly a Borderlands game. The writing is spot-on, the cameos and returning characters largely fit well rather then feeling shoe-horned in with a crowbar, there are plenty of knowing winks to the main franchise, and there’s more gunplay and driving than you might’ve expected. Basically: it feels like Borderlands. 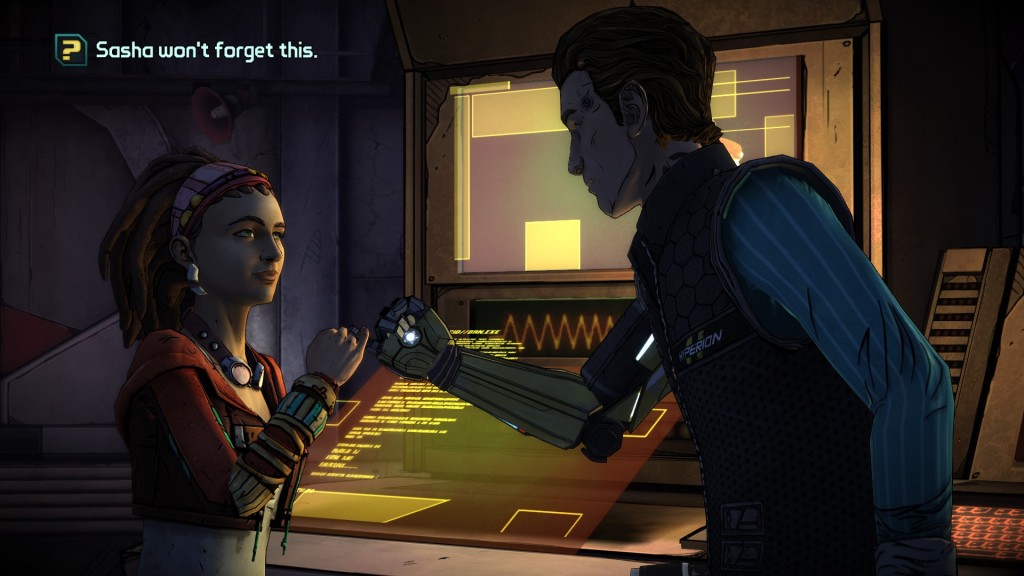 D’aww. See? It’s not all comedy violence! This is actually quite touching! Although it’s back to comedy violence about five seconds after this screengrab was taken.

You play as both Rhys and Fiona across this adventure, and both are witty and likeable for their own reasons. They also have their own abilities: Rhys has an ECHO Eye, allowing him to scan objects and people to learn more about them, while Fiona has the amazing ability to spend money on things.

No, really. Being a broke Pandoran means that money means quite a lot to her and you’ll get a few occasions to pinch a bit more over the course of this episode, as well as a couple of occasions to spend it. You might want to bribe someone, or possibly buy something shiny and new. 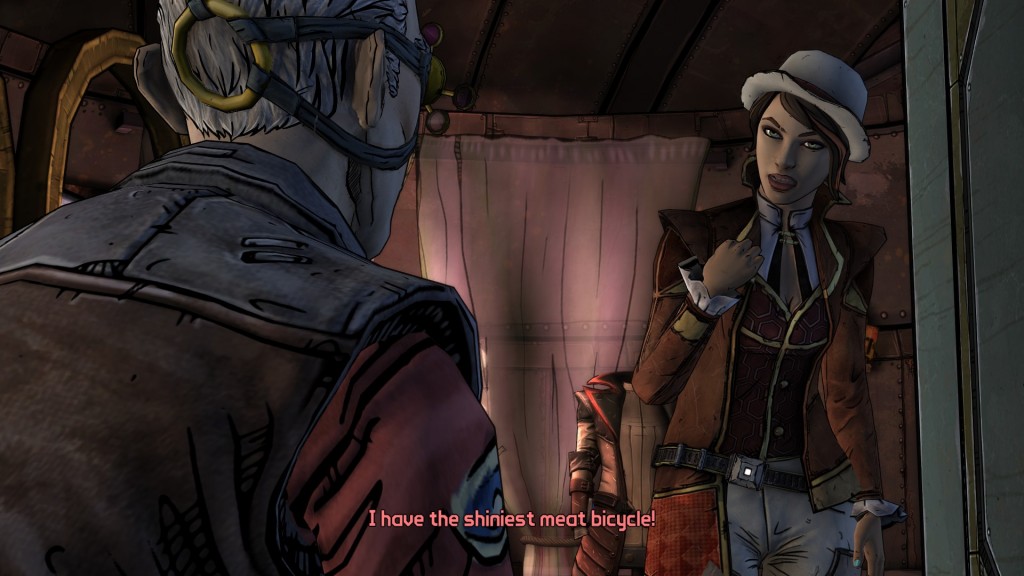 Fiona is voiced by Laura Bailey, who also did one of the voices for The Boss in the Saints Row series. That fact makes lines like this even better.

Unfortunately, neither of these really come into play very much. You do have a fair few opportunities to scan things with the ECHO eye for some background info, but I can think of exactly two occasions when Fiona can use her cash to solve any problems. Equally, there were really only a fingerful of occasions when the option to get more popped up. Sad.

Not too sad, though, because Tales from the Borderlands is more focused on character and story. Playing as a smarmy Hyperion exec means you get the chance to see Pandora from the perspective of someone who isn’t used to fighting bandits just to go to the shops, and Rhys very quickly learns that talking to random people while wearing a Hyperion top tends to lead to violent trouble.

The quick-time events here revolve less around bare-knuckle brawls involving zombies and furniture, and more about bandits and assault rifles. And grenades. And robots. There are a lot of these sections, but not enough to get in the way; the whole thing feels well-paced and the action-y moments always seem to arrive at a fitting time. 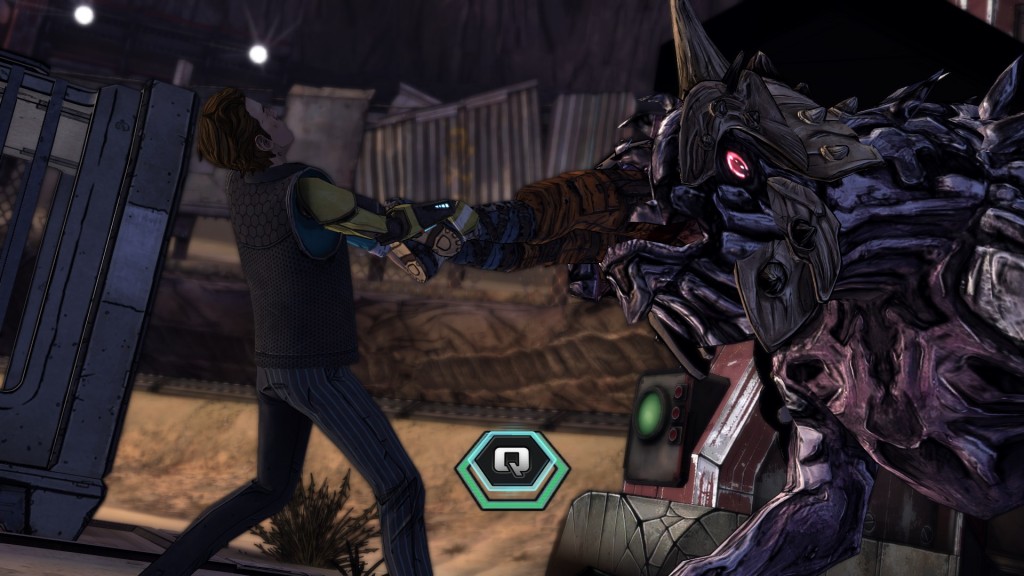 I’m not going to lie: some of the quick-time events are a bit… odd. Unless you think playing tug-of-war with a huge man-eating beast using someone’s corpse is normal, anyway, but if that’s your idea of normal then there’s no way I’m starting an argument with you.

Playing as both characters also helps with one other thing: this story is told in a Rashomon style, insofar as it’s being told in retrospect as both Fiona and Rhys are held at gunpoint. You see the scenes play out from multiple perspectives, with one of the pair usually leaving out certain facts that don’t exactly cast them in the best light – and for maximum hilarity, you can choose to add some truly unlikely fictions to the story as it goes on.

Death is entirely possible should you screw up the quick-time events, but this story framing means it’s quickly reversed Monkey Island 2 style, with the disbelieving interrogator questioning whether they really died right then. I didn’t die much, mind. I can’t say I find the QTEs overly tricky, but then I generally don’t – I only screwed up once, and that was because I made the mistake of reaching for a drink. Oops.

Still, it’s hard to know quite who to suggest Tales from the Borderlands to. Obviously, fans of Borderlands who don’t mind having nothing to shoot should consider this. Those who play Borderlands primarily for the shooting and looting but are left cold by the humour and dialogue might not have such a good time, though, and I’m not quite sure whether or not this is the best introduction to the Borderlands universe for Telltale devotees who don’t know their Hyperion from their Tediore. 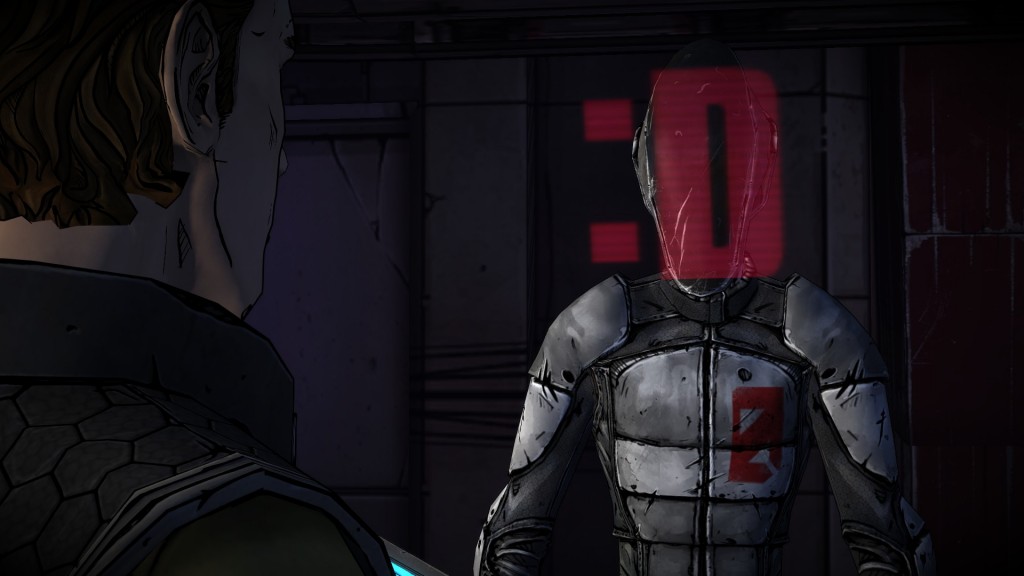 I don’t think the basic plot should prove to be much of a bother – this episode, at least, is a fairly familiar heist tale with multiple stings throughout – but if you don’t know what a Vault is, what Hyperion spent the last game doing, and why Pandora is an ungoverned wasteland swarming with psychopaths and bandits, then the background might give you cause to pause. There are lots and lots of little nods and bits of fun-poking at Borderlands conventions, with everything from loot to the introductory sequence featuring a skag being hit by a vehicle getting lampooned.

Honestly, though? Even if you don’t get the references, your confusion probably won’t stop you enjoying a few cheap and gory laughs. This is Telltale carving out their own unique niche into an established RPG/shooter series. It could so easily have gone very, very wrong, but if this episode is any indication then Tales from the Borderlands might wind up being one of their better series.

New Indies on Steam for Week of Nov 16 – Indie Corner

By Blake Grundman9 hours ago
Reviews