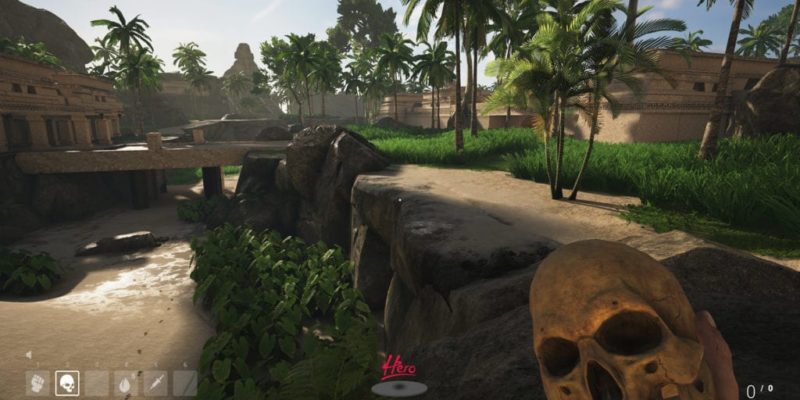 SOS from Outpost Games has a slightly different take on the PvP survival genre and it’s now in Early Access. PvP survival games are still popular but it takes something special for a game to stick with gamers.

Outpost has added a slight twist to SOS in that players are predictably dropped onto an island and have to find a relic to secure a place on an evacuation chopper. The problem is there are only three seats on the chopper which means not everyone is going to get out alive. Over a thirty minute period players dash around, scavenging for weapons and health objects, attempt to make friends, and forge alliances before the inevitable happens at the end.

Outpost has made voice communications key to help form alliances, and if that’s not something you’re comfortable with, then this will not be the game for you. As real player interaction is necessary, invariably you will have to play with a lot of dicks who will either be annoying or just offensive in general. It has all the ingredients to make you hate online gaming which I’m sure will appeal to some gamers.

Outpost has also added Hero platform integration where viewers can tune in and watch and then vote for their favourite contestants. Just like the crap reality TV shows that have become so popular. This will be giving streamers orgasms at the thought of trying to entertain viewers. It’s extremely cringy to watch as players shout, put on stupid voices, and tell terrible jokes.

The game is available now in Early Access but it’s a very hefty $30 considering the limited content currently available. SOS will either boom thanks to streamers or be another of those survival games that entertain a core audience for a few months. Our advice is to wait and see what happens with the game before even thinking about it because this could end up being one of the most annoying games ever made.

And now, to demonstrate how annoying SOS can be, here’s Snoop playing it earlier today. He’s rather keen on taking out demons by shouting “fucking it off”, “down bitch”, and “get his fucking ass”. It’s all expertly delivered while toking a huge spliff.