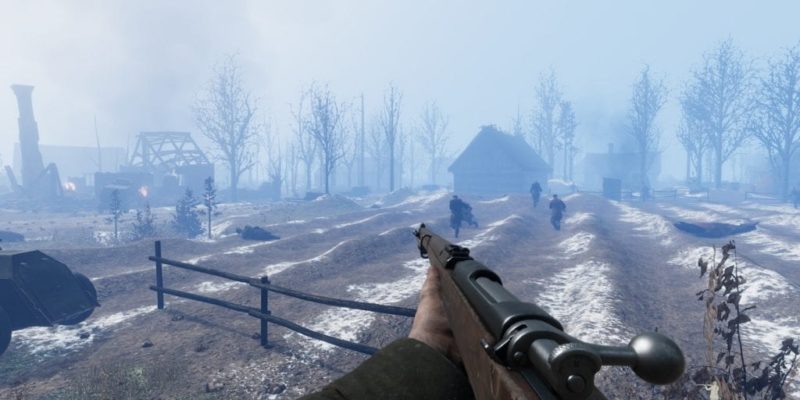 If you’ve been checking out our coverage on first-person shooters, then you’ll probably realize that I’m the “FPS guy.” From established franchises such as Call of Duty and Battlefield to new-to-PC offerings like Destiny 2 and Apex Legends, I’m there to jump/360-degree headshot some opponents. But that doesn’t mean I’m big into “twitch-style” gameplay. As I’ve gotten older, I’ve preferred a slower, more tactical playstyle. When I heard of Tannenberg, which takes place on the Eastern Front of the First World War, I knew I had to check it out. This FPS from the makers of Verdun features human wave assaults in vast countrysides, along with authentic Great War-era weaponry and troop depictions. 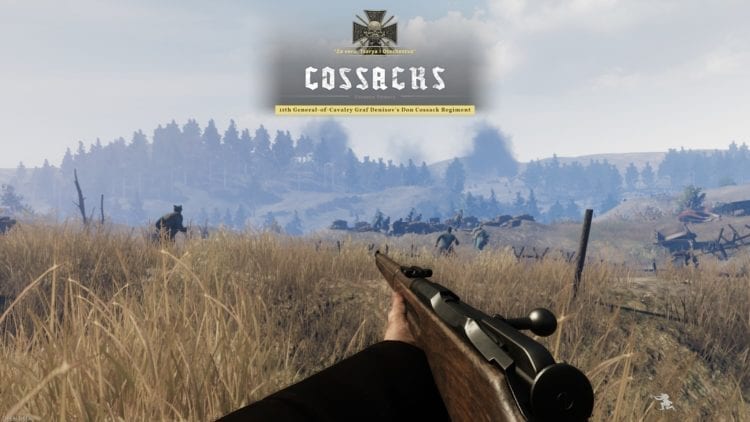 The patriotic anthems at the beginning of each match keep you pumped for more action.

Tannenberg’s biggest game mode is Maneuver which is a 64-player clash. If not enough players are found, bots automatically join in. Think of it like conquest mode in a number of FPS titles with players assaulting en masse to capture “sectors” (or control points). The factions include Russia’s Imperial Army, the Cossacks, and Romania for the Entente, as well as Germany, Austria-Hungary, and Bulgaria for the Central Powers. Each faction has its own corresponding bonuses.

Russia’s Imperial Army (Frontovik) and Austria-Hungary might have slightly faster reload speed for rifles. The Cossacks and the Germans have more stamina, and the Romanians and Bulgarians have heavy machine gun (HMG) ammo for all troops.

Also, each faction has its own squads with different roles or classes. In general, they’re divided into the typical FPS archetypes — Lieutenant (NCO), Rifleman, Gunner, and Grenadier. The perks that these roles have may be different although they’re still dependent on the faction. Here’s an example:

The Russian Frontovik and Austro-Hungarian Rifleman class has +15 exp for kills in enemy-owned sectors, a shorter cooldown between bayonet attacks, and slightly faster reload speed. However, the Rifleman class for the Romanians and Bulgarians have +15 exp for kills in friendly sectors, with bonus exp for long-range shots and less weapon sway. The experience points you receive after each match leads to level ups as well as the unlocking of new weapon attachments. 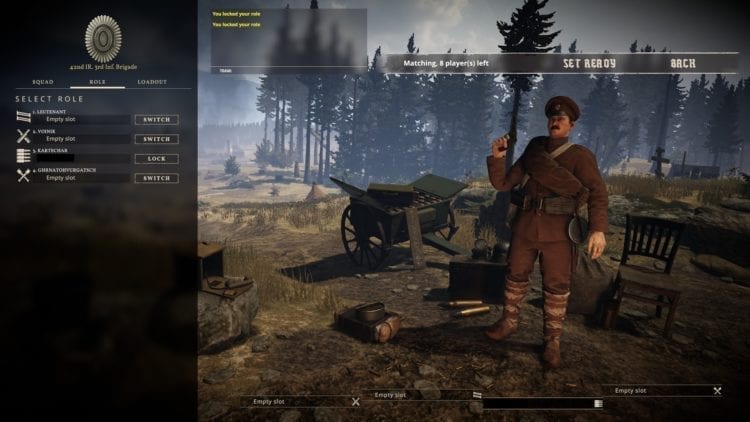 The Bulgarian troops have bonuses. In fact, every faction/squad role has certain perks. Too bad there are no perks for dashing mustaches.

Everything sounds good on paper, right? Well, no, not quite. That’s because these bonuses are fairly minor which means a number of classes play alike. Although Tannenberg features dozens of World War I weaponry,  you’ll realize that all of these function with barely any difference from their counterparts.

A majority of weapons you’re using are bolt-action rifles, obviously, since it’s set in 1914-1918. That adds a lot of authenticity to the period’s depiction, much like its predecessor Verdun. But that also has an adverse effect of making each role unremarkable. 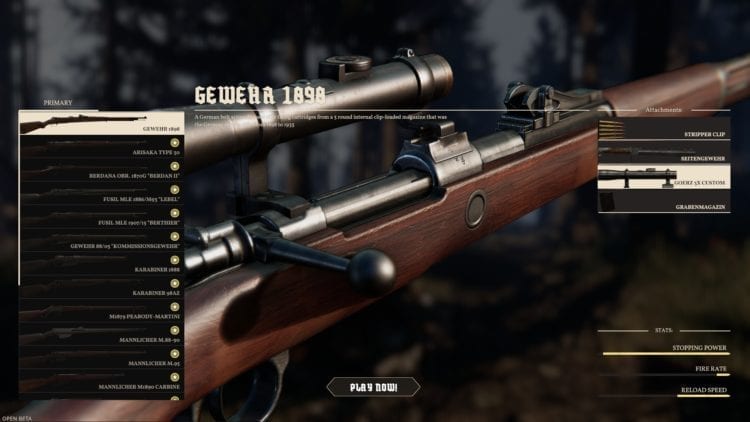 You’ll soon realize that the game predominantly has bolt-action rifles, each with minor differences. You’re mostly looking for higher rate-of-fire or reload speed. Also, this is from the “Rifle Deathmatch” free-for-all mode, you’re not going to see weapon stats at all in Maneuver.

There are no vehicles you can drive and no artillery you can control (except for fixed machine guns). It means the focus is simply on infantry-versus-infantry, bolt-action rifle against bolt-action rifle (or maybe an officer’s pistol or a shovel).

Out of all the roles, the only one which can be considered a class on its own is the NCO of each squad. That’s because this role gives some extra buffs to nearby squadmates, and they can even call in artillery support or gas attacks. The NCO role will often be taken by a human player if you’re just joining a game unless a squad is open. If that’s the case, either you’re picking one of the three other classes with barely any difference in playstyle, or you’ll just make your own game versus bots. 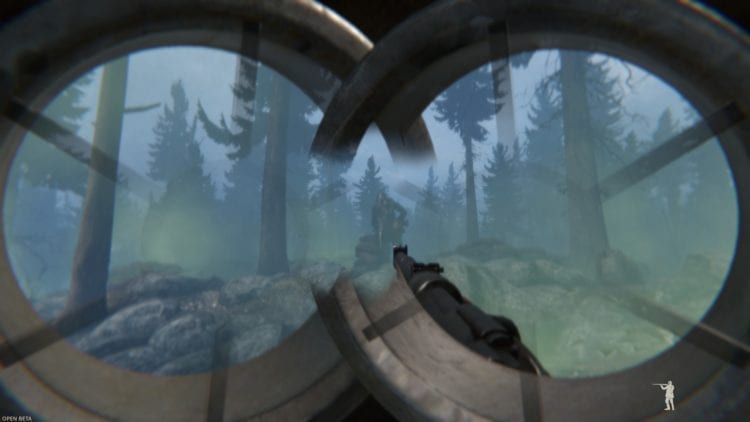 Mustard and chlorine gas attacks are a sight to behold… well, through your gas mask obviously.

Graphically, Tannenberg’s presentation is fairly decent. It’s not going to dazzle you like any Battlefield or Call of Duty game, and that’s fine, it has its own distinct quality. The maps are varied, from bombed-out villages in Poland to the plains of Galicia, as well as the lush forests of the Carpathians.

Weather and time of day also play a role, such as when snow or fog affect visibility. There’s an eerie sense of calm with a thick mist enveloping the area, all before your human wave assaults a fortified position. If the atmosphere of large-scale firefights is what you’re looking for, then Tannenberg has that in spades… well, minus the vehicles and player-controlled artillery.

While each map has stunning locales in their own right, there’s one problem — I actually couldn’t figure out how to specify anything. The only options available were to select from an existing game or to create a squad. When you do create one and ready up, you’ll just create a separate match depending on the squad (ie. Bulgaria seems like it defaults to Dobrudja, while Germany can randomly end up in the Polish hinterlands).

Even when there’s a match in progress, it took me a while to figure out what exactly was going on. Tannenberg doesn’t have your traditional “server panel” telling you the information you need to know about a match. It has “military hats” instead. I actually had to check the Steam forum to even know what they were for. 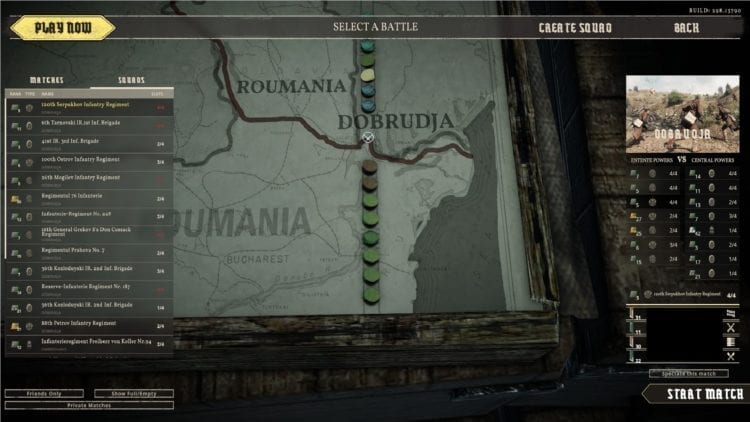 Picking a match in Tannenberg is like playing a Hearts of Iron campaign.

Although I’ve played against human opponents during the open beta, my experience was marred due to my regional location. As someone from Asia, there’s no one playing from my region. I had to join the EU servers which meant ending up with 300 to 400 latency while everyone else had 60 to 80 ms. For those who are familiar with FPS games, you’ll know that latency is extremely important as the smallest delay can mean the difference between killing someone or getting killed instead.

As part of due diligence, I also asked one of my US-based colleagues, Tyler Scott, to check out the game. In his case, he was getting roughly 100-150 ms when playing in the EU server and 40-60 ms in the US server: 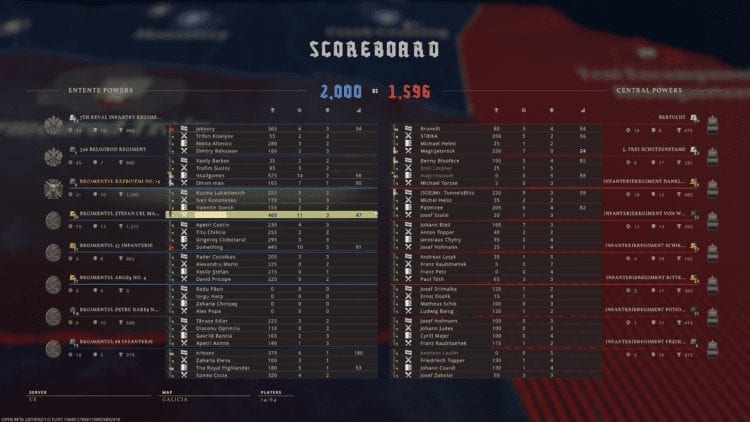 Low latency means better experience overall. I can’t compete in the EU servers since mine spikes up to 400 ms, while the Asia servers are quite empty.

In the Asia server, I mostly had to start matches versus bots. Now, AI can be quite competitive — not because of actual AI difficulty, but due to Tannenberg’s take on realistic gunfights. This isn’t a game where you can quickly regen health or have shields. If you’re grazed or suppressed, you’re going to frantically run for cover while your screen starts fading to grey. Most of the time, though, it only takes one shot to kill you.

Given these combat mechanics, bots can end up running aimlessly for you to mow down, or they can get the jump on you if you’re not careful. Their AI can also be confusing at times. They might all funnel into a single doorway, or they’d sometimes forget to capture points. They’d often run ahead and crouch at a spot when the game has just begun, and then they’ll all attack in a certain direction before randomly falling back. 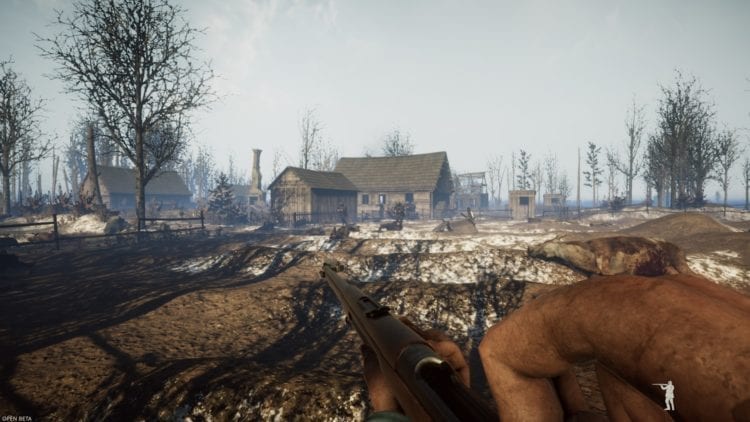 The soldiers were having dinner when gunfire erupted. They all came running out of the same doorway.

Bot AI, latency issues, and  “samey” character archetypes and weaponry weren’t the only problems I had with Tannenberg. The animations left a lot to be desired. Character animations looked off in places, most of the time feeling stiff compared to the more fluid depictions you’d see in FPS titles. It’s as though you’re watching cartoony frame-by-frame action even though the game tries to be realistic.

Imagine shooting an enemy and waiting for half a second to see if they actually died or not. That’s because enemy death animations lead them to collapse or crumple like paper. You don’t feel as though there’s any impact to your shot barring a soft “thud.”

Also, the reload animation is unforgivably slow. You’re fighting hellaciously in the trenches and, when you need to reload, your soldier acts like he doesn’t want to chip a nail. It doesn’t help matters that most weapons can’t be reloaded without emptying the clip first. Likewise, your gun can jam when you interrupt your reload animation.

Apart from animations, I also noticed sudden framerate drops. These can happen from time to time such as when manning the machine guns or just running to new sectors. I cannot tell if the game is fully optimized. I’ve even changed to high settings instead of the ultra preset and still these sudden drops can happen. If you’ve seen our past technical reviews, then you’ll know that my rig can handle more demanding shooters. It boggles my mind how I’m experiencing these performance drops in Tannenberg instead. 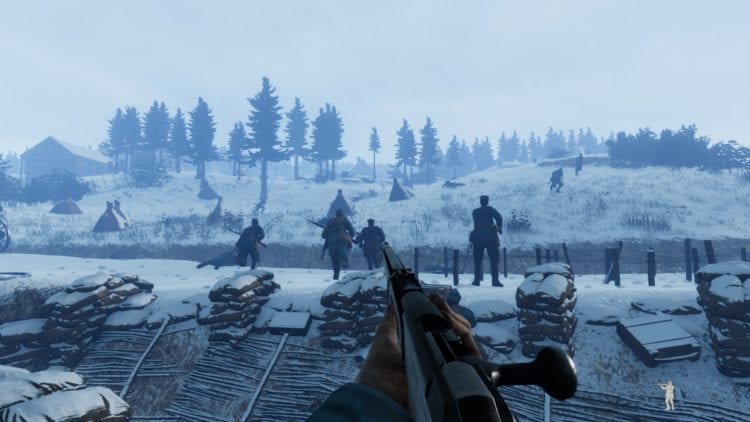 The Romanians go “over the top.”

Going Over The Top

With the official release, I’ve noticed that the issues with character animations persisted. They may just part of the game depending on the engine or design. Also, after playing a few more games post-launch, I’m convinced that some extra polish is needed to make Tannenberg more appealing to a wider audience.

With just a handful of players even on launch day, only a few games will be running at times. If Maneuver matches don’t have 64 players, then you’ll find yourself surrounded by bots. The AI itself is dubiously inept, relying solely on the game’s (almost) one-shot, one-kill mechanics. There’s no option to disable them.

The other two game modes — Attrition (Team Deathmatch) and Rifle Deathmatch (Free-for-all) — barely have any players at the moment. It leads me to question the engagement and interest of the player base, moving forward, knowing that Verdun itself already occupies a niche market, yet it still managed to retain a dedicated following. 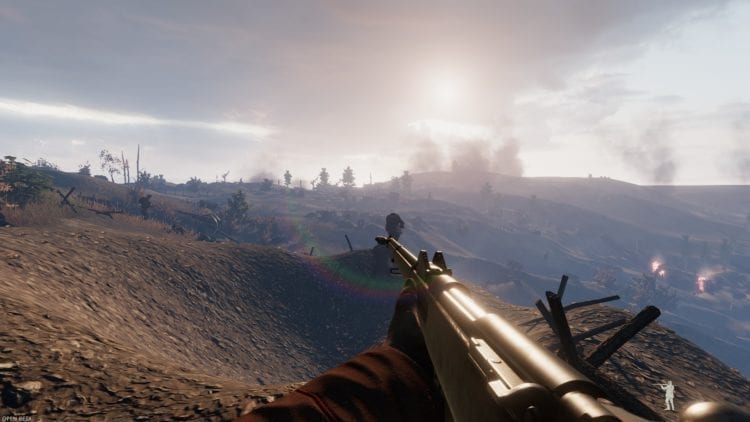 The Dobrudja map looks absolutely stunning even if the game, for the most part, isn’t.

Although I’ve been critical of Tannenberg, I can definitely give credit where it’s due. The authenticity alone is enough to be considered a history buff’s wet dream. Pre-battle map information, weaponry, audio, and landscapes provide a refreshing look at World War I.

There are instances when Tannenberg captures the essence of this great conflict. Moments of sheer brilliance exist. Seeing the rays of sunlight wash over a battlefield or a feverish assault on a fortified position is awe-inspiring. Getting caught in a gas attack, putting on your gas mask, and then trying to spot opponents through impaired vision is frighteningly tense. Soaring music and the deafening shouts of “hurrah” as soldiers charge give you that sense of bravado. There’s that hint of national pride when you represent your country’s past via your squads and soldiers. The players I’ve spoken to shared how ecstatic they were upon defeating their neighbors.

Sadly, all of these take a backseat to the aforementioned issues. Authenticity is all well and good, but it doesn’t always equate to that all-important fun factor.

Tannenberg has authenticity in spades. Sadly, middling animations, unreliable AI, and uninspiring combat sully what could've been a remarkable experience.