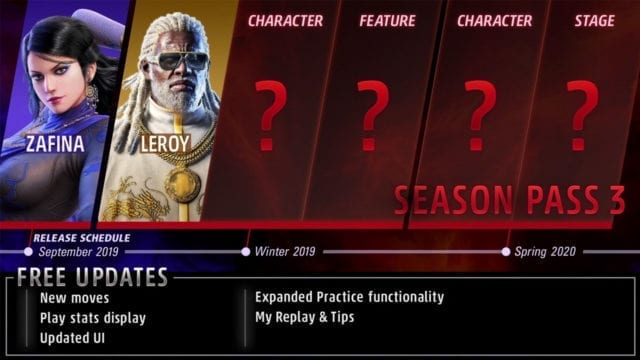 The Evo 2019 Championship Series just concluded, and Bandai Namco is taking the opportunity to reveal the Season Pass 3 of Tekken 7. Just like the Season Pass 2, it will go on sale starting in September. The new content includes four new characters, a new stage, and some new features that are yet to be revealed. A free update will also add new moves to existing Tekken 7 fighters, as well as some quality-of-life and UI improvements.

You can already check out two of the new characters on the Season Pass 3 reveal trailer below. First, players will see the return of Zafina, who’s making her first in-game appearance since Tekken Tag Tournament 2 and Tekken 3D: Prime Edition. She will be available from day one of the Season Pass 3 launch. The trailer shows her staring into her crystal ball as she holds it with her demonic claw-hand. She stares at it until it breaks and turns black. We also see some of her moves and her claw-hand in its more beastly appearance before she manages to calm it down.

The second new fighter is a brand new character called Leroy Smith, who reminds me of Pai Mei with dreadlocks and a cooler beard. The trailer first shows him practicing his moves on a Chinese wooden dummy, clad in a stylish white kung fu robe. He takes on a couple of fighters, knocking them down swiftly, then invites another to take him on with a Morpheus-style hand wave. He’s a cool-looking mo-fo, and it should be a great addition to the Tekken 7 roster of fighters. Leroy Smith will set foot on the King of Iron Fist Tournament stage for the very first time in winter 2019. According to the roadmap, another new character and a new feature will also be released by winter 2019. Additionally, a final new character and a new stage will come in spring 2020.

If you’re interested in tickets for the Tekken World Tour finals, they will go on sale on Aug. 9 at 6 a.m. EST on Eventbrite. A general ticket will cost you $10, and a preferred ticket $40.

What do you think of the season pass? Are you looking forward to playing with Leroy Smith? Drop your comments below and tell us what you think!