As you may have already heard, Ubisoft decided to withhold review copies of The Crew from professional outlets until the day before launch. Release day is 2 December, so, as you can imagine, this piece is not a full review.

Doing a review this early would result in incredible insights such as “The Crew has cars in it,” “the main character still looks like hipster Gordon Freeman” and “wow, Ubisoft really do love cramming radio towers into everything.” There’s really only so much I can see in an afternoon.

But, as I said, it’s not a review. Instead this article will be looking at the various PC graphics options on offer, and I’ll do my best to convey how the game performs. I’ll also let you know if it’s another Assassin’s Creed: Unity and all the cars are missing their front bodywork in cut-scenes or something. 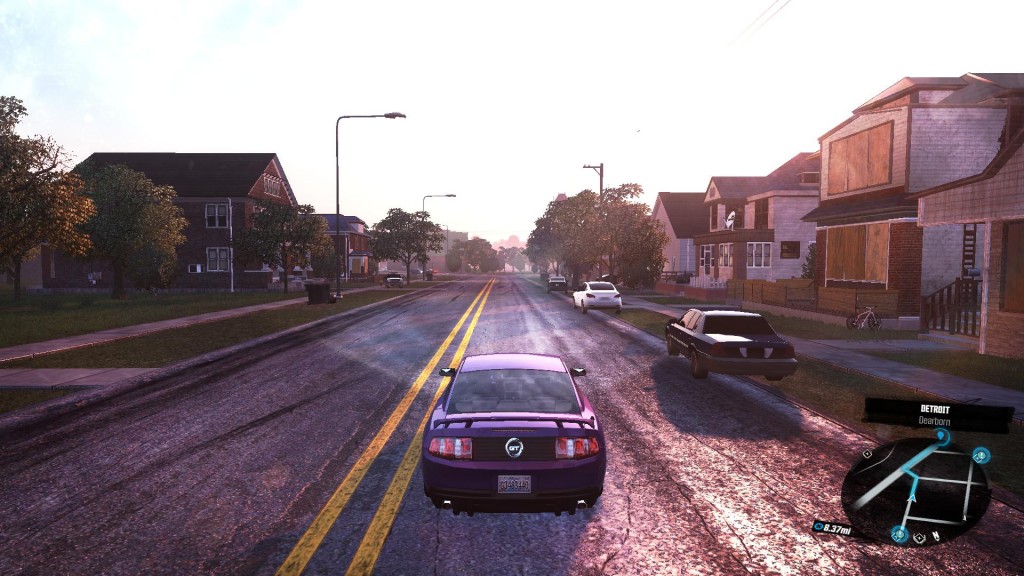 Most of the time you only see the rear, so WHO KNOWS?

As is tradition for these port articles, here’s the machine I’ve been playing The Crew on: i3-2100/8GB RAM/2GB HD 7870. Not the most powerful PC in the land by any means, so hopefully with that information you’ll be able to adjust your own expectations accordingly.

I’m using the latest Catalyst beta drivers (14.11.2) and not running much of anything besides uPlay, The Crew and FRAPS (plus the usual bits and bobs of Windows 7.)

Onwards, then, to some exciting menu options. All of the images in this piece can be enlarged with a click. 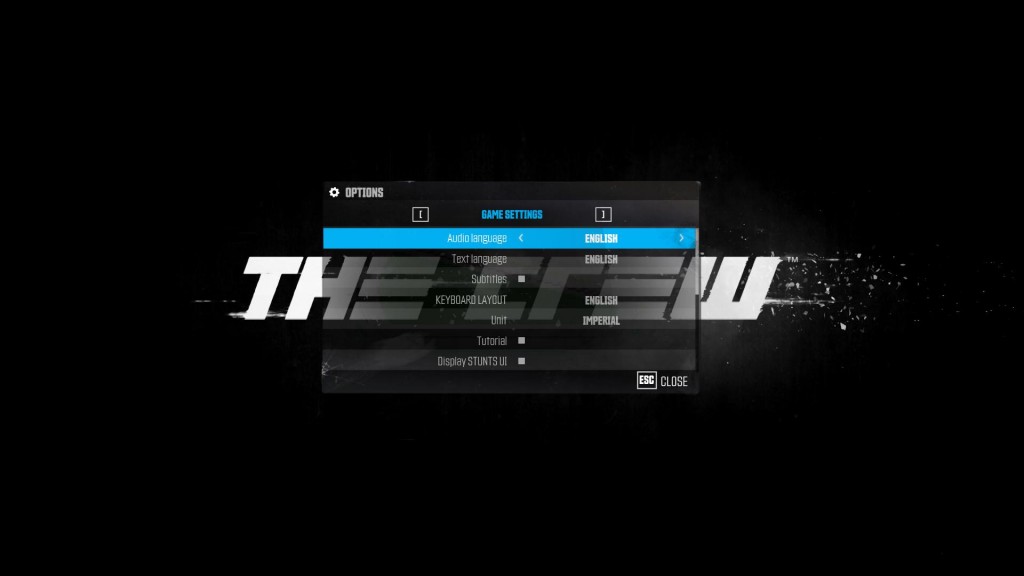 Test your knowledge of international keyboard layouts with a randomised choice. 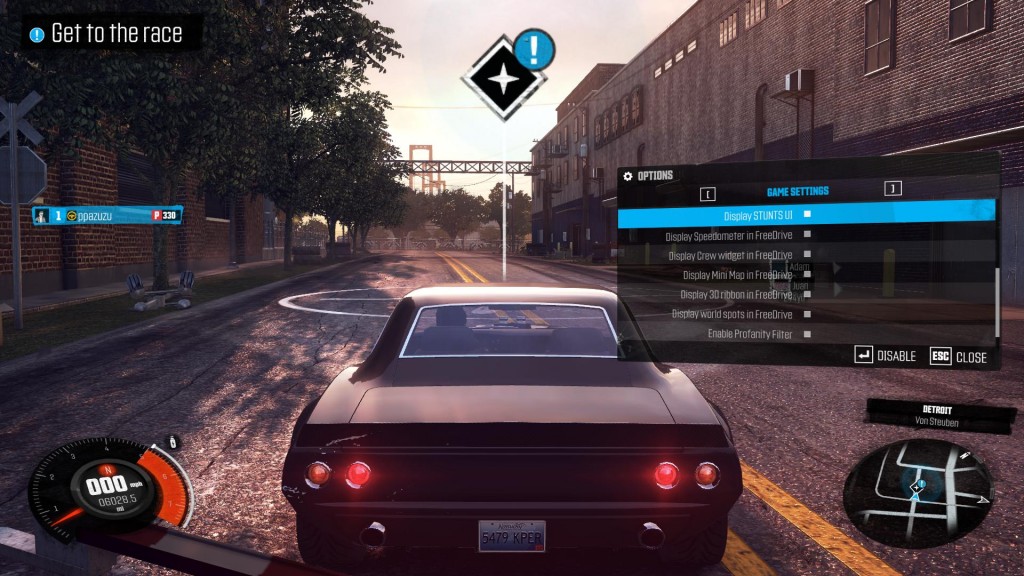 This was before I remembered there was a higher, third-person camera option.

The basic settings can be seen above, notable for the amount of HUD stuff you can switch off during ‘FreeDrive’ (cruising around outside set missions) if you feel so inclined. It’s also great to see that I can have my cars measured in Imperial Fluid Ounces. As god intended.

You can bin the tutorial prompts too, if you fancy. 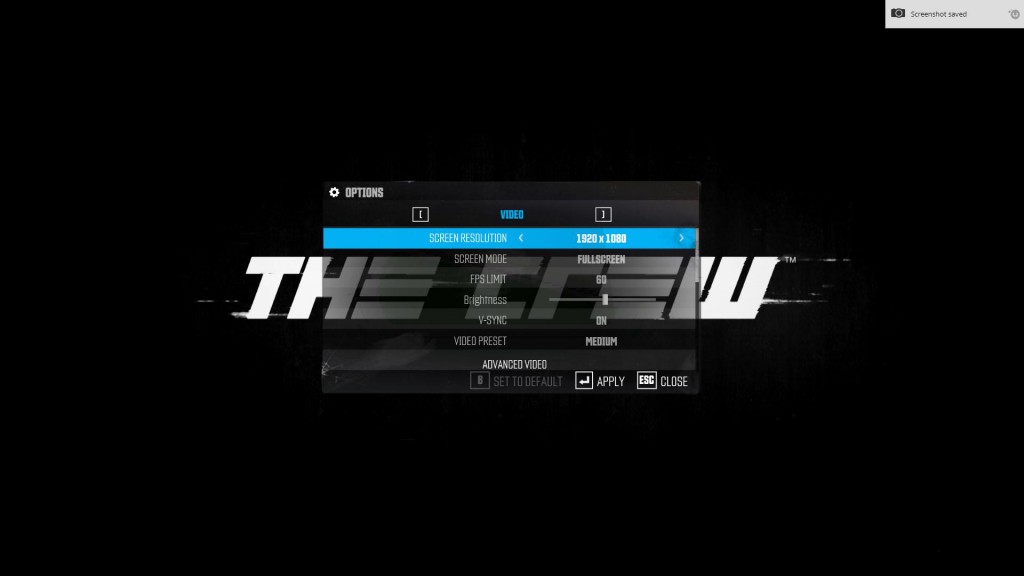 Now with 100% more generous FPS than the beta.

So here’s part one of the graphics options. Probably of most interest in this upper section is the ‘FPS Limit’ toggle. As promised by Ubisoft, you can indeed set this to 60 on PC. You can’t set it to “no FPS limit at all, please” but 60fps is a whole lot better than the 30fps-locked beta version. 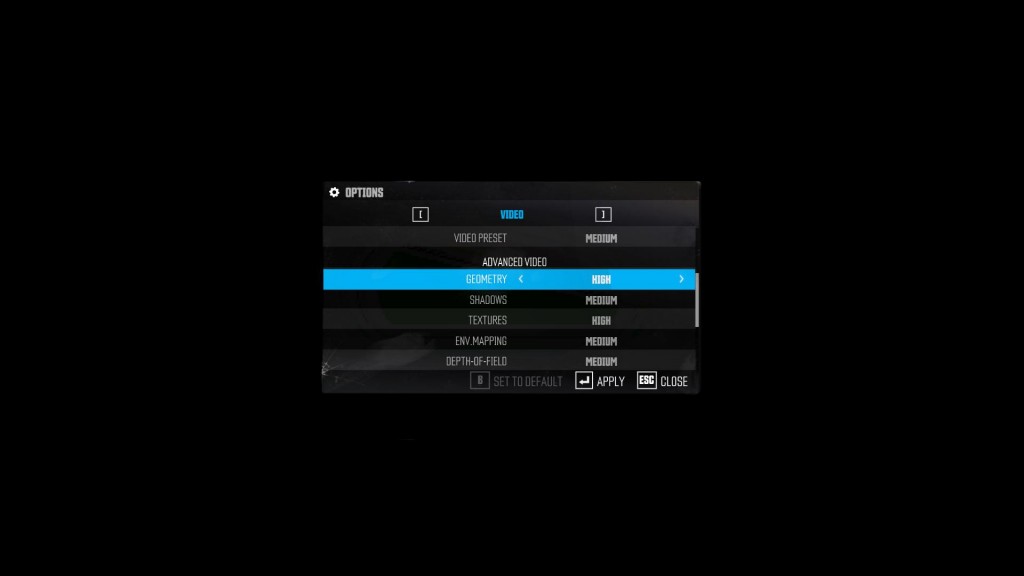 Here’s what you can change in the ‘Advanced’ section. The majority of the options on the screen above have a Low/Medium/High/Ultra setting. Except Depth of Field which also has an ‘Off,’ and Shadows which can go all the way up to ‘Fancy Pants Soft Shadows.’ Or words to that effect. 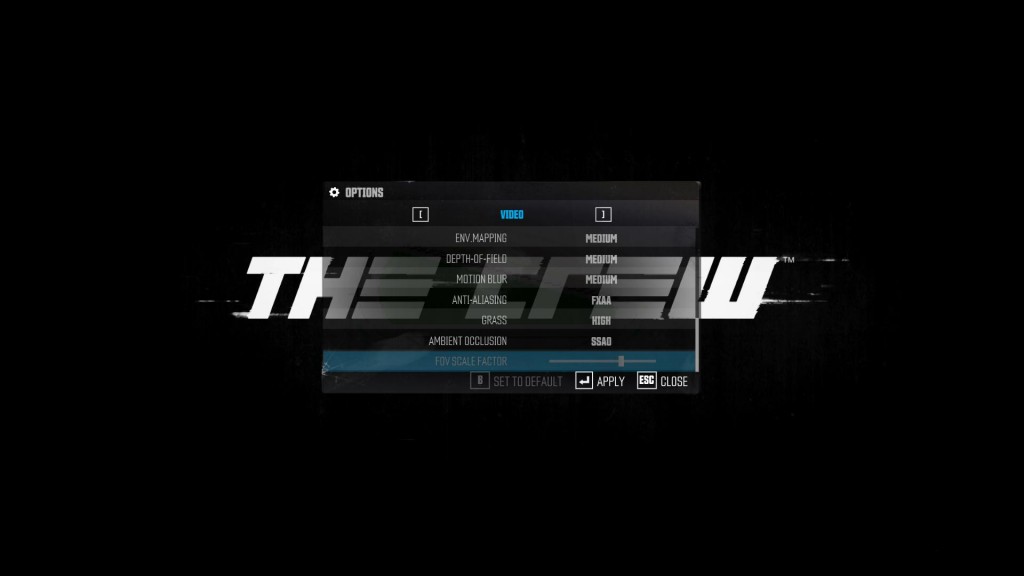 FOV Scale Factor never revealed its mysteries to me.

In this section, Motion Blur can be Off/Low/Medium/High. The Anti-Aliasing options are FXAA, 4xMSAA and 8xMSAA. Ambient Occlusion can be Off, SSAO or SSAO+.

I have no idea what the ‘FOV scale factor’ slider is supposed to do, because it remained grayed out for me at all times. Maybe it’s supposed to control how far back the camera is pulled from your car? That might be useful, but, as I say, it was permanently unavailable to me.

Let’s see some comparison shots between highest and lowest settings, shall we? Yes, let’s: 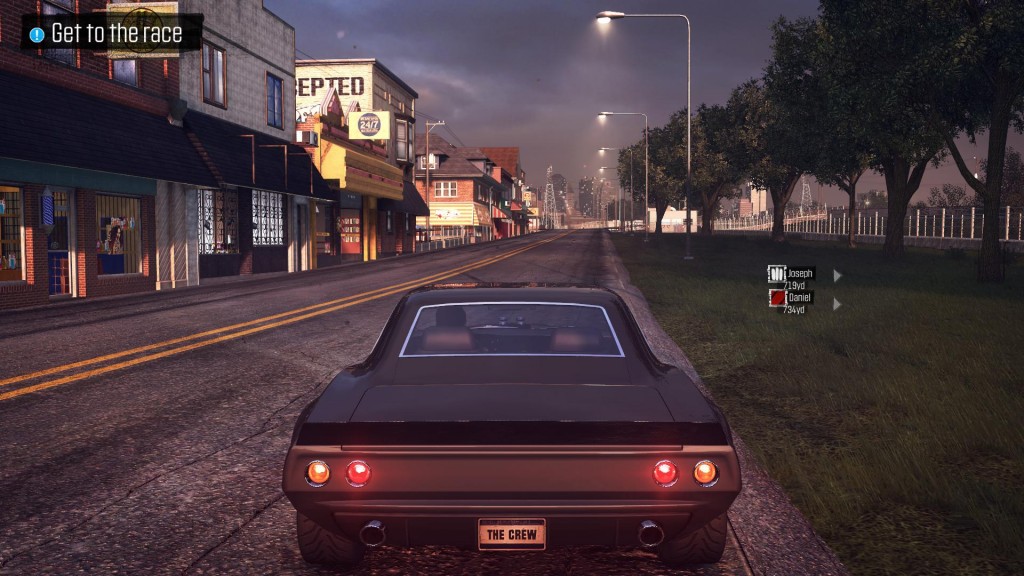 Highest possible settings. AKA: 10-20fps at best for me. 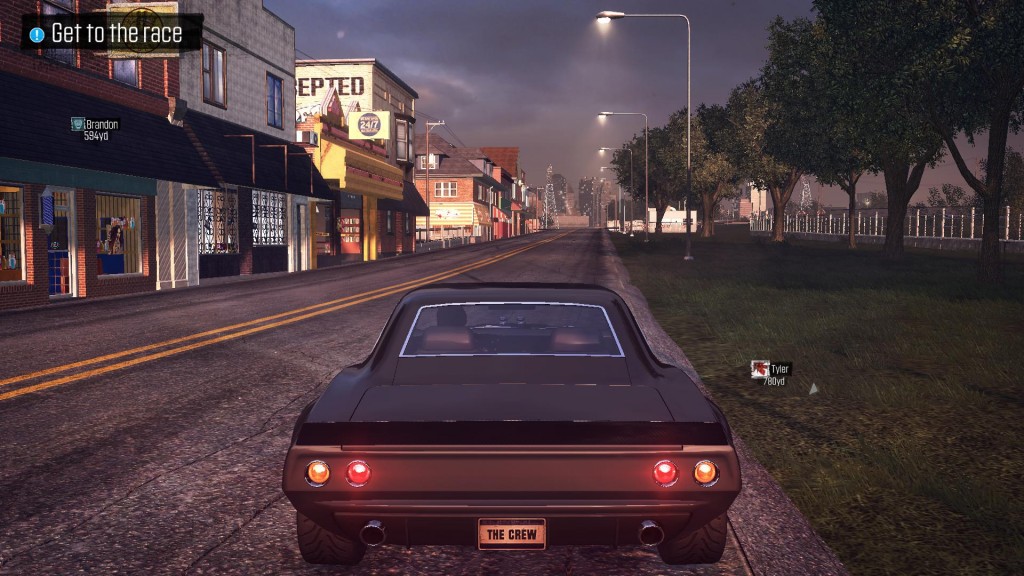 The sweet spot for 60fps performance on my machine seems to just be “don’t be in a crowded part of a city.” Out in the countryside, no matter how pretty the sunset might be looking, I’ll get a consistent 60 at 1080p on a medium-high settings mix (with FXAA.) Head into the busier parts of Detroit or Chicago and that tanks to the 40-50 range.

In traditional Ubisoft PC port style, it doesn’t really matter if I shove all the options to low inside cities. Even after a reload, I’ll still get the same frame-rates (maybe slightly higher, but not worth the visual impact.)

Sadly, using anything above FXAA in the anti-aliasing options causes the frame-rate to get quite upset no matter where I’m driving. That’s a shame because 4xMSAA is (obviously) a hell of a lot smoother looking than FXAA, which honestly doesn’t appear much different at 1080p than just leaving the AA options switched off altogether.

Basically, if you want to hit 60fps all over the place in The Crew it looks like you’ll need a beefier processor/GPU combination than mine. Since my 7870 card hits Ubisoft’s “optimal” specs for this game, I’d imagine the processor is the weak link here. 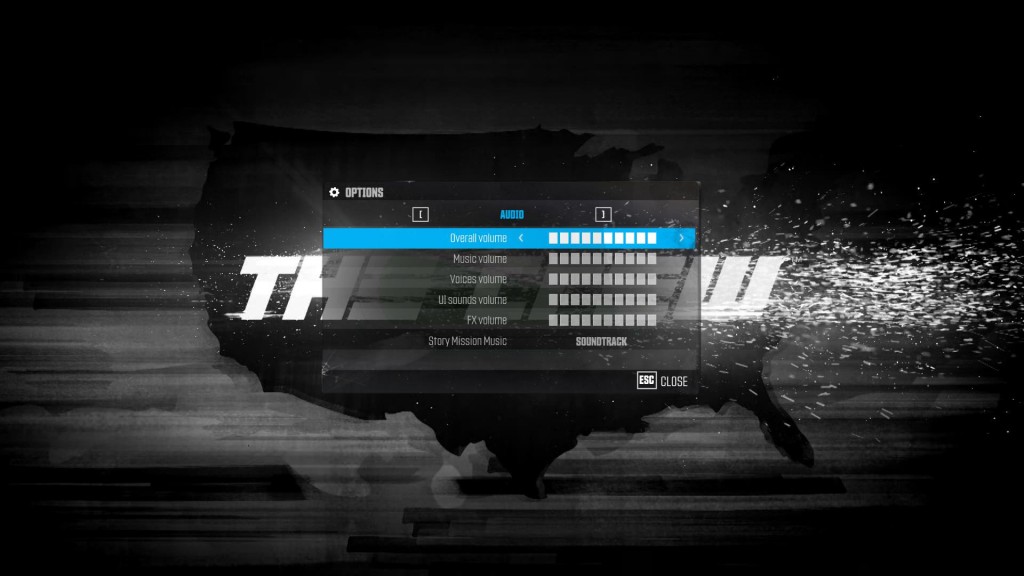 ‘ears where you change the audio.

I wouldn’t normally bother sharing the Audio tab, but there are a couple of interesting notes to bring up here. Firstly, there doesn’t seem to be anywhere to set any kind of voice chat options. This is a bit weird, because in the beta version everybody’s mic was automatically open all the time.

That’s not a desirable situation for the full release, but to be honest I’ve not yet come across the same phenomena. Either the reviewers I was cruising close to have no microphones, or Ubisoft decided to go all text chat for the PC (there’s a togglable MMO-style text window,) or something else is going on here. Perhaps you’re supposed to use uPlay’s beta voice chat options, I’m not sure. The point is, nowhere in the PC options does there seem to be mention or control over voice chat. Which is a bit odd.

Second, the option to choose the default soundtrack, radio tracks, or silence to accompany the story missions is a pretty neat one. It’s a shame the radio tracks are still close to silent, even after dropping all the other audio levels near zero. It’s also a shame that the radio selection can’t hold a candle to Driver: San Francisco’s. 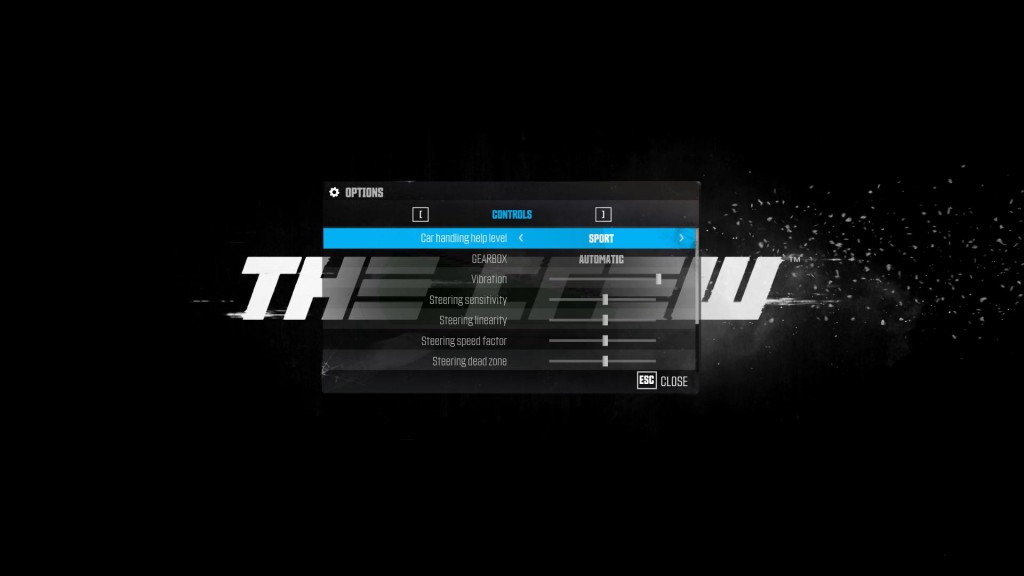 The default handling feels a bit rubbish, but I’m in the earliest car with basically no upgrades so I guess that makes sense. 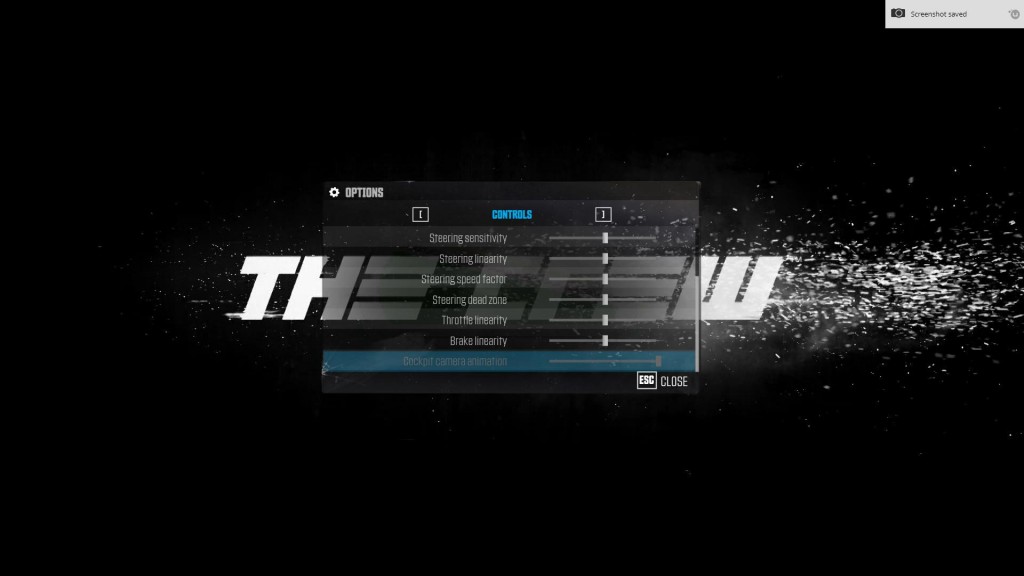 I really haven’t fiddled around with these handling tweaks outside of their default settings, but it’s encouraging to see that there’s scope for fine-tuning. The ‘Car Handling Help’ level offers All Assists On, Sport (whatever that means) and Hardcore, which presumably means everything assist-like is turned off. Whatever these assists are, they’re hidden from view and apparently can’t be changed beyond these settings. 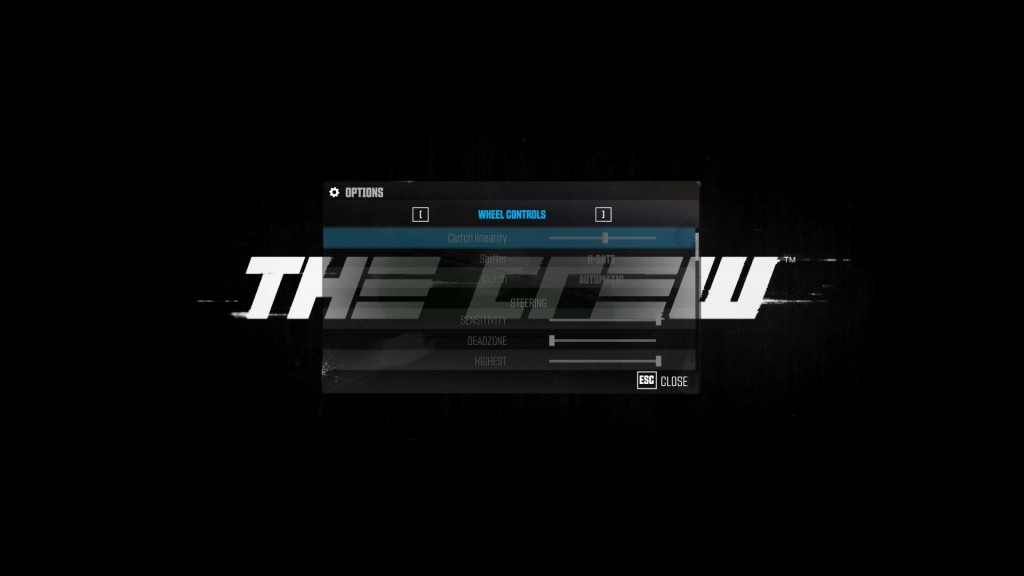 There are a bunch of these. 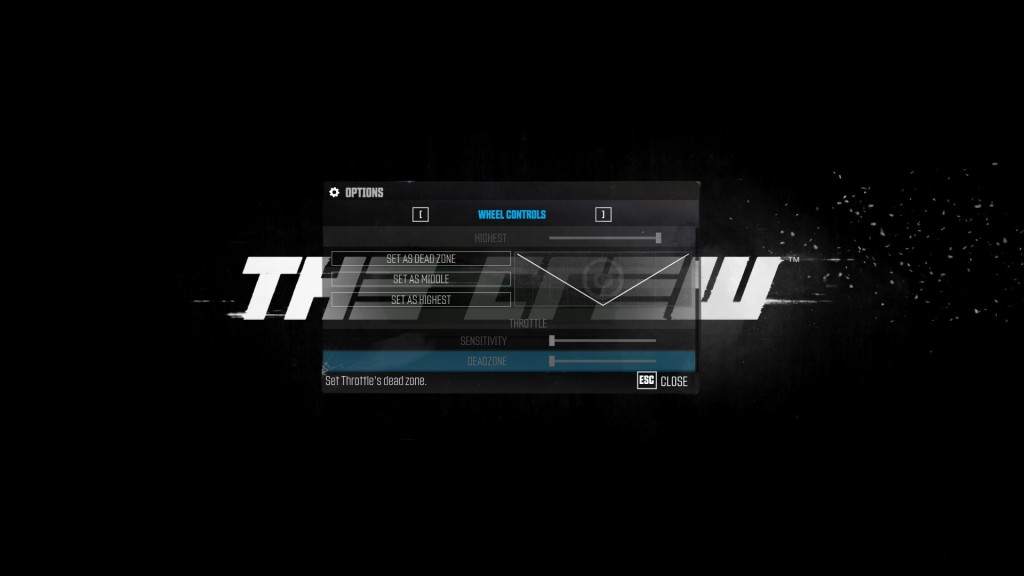 I hope somebody finds them vaguely useful. 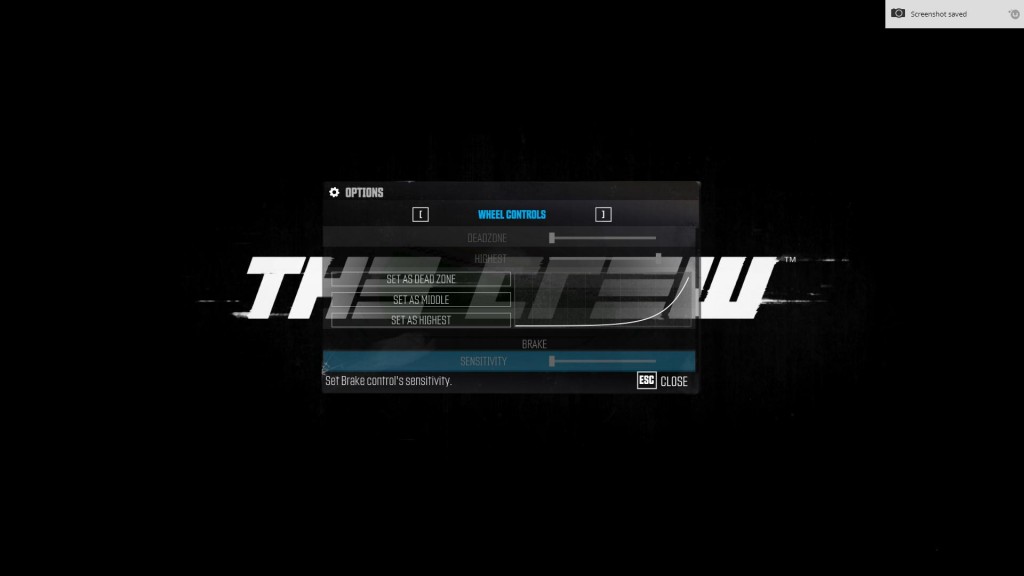 They mean pretty much nothing to me, I’m afraid.

If you’re some kind of pro racing game driver person, then you probably have a racing wheel of some kind. The above images are the options for those. I can’t really comment on how impressive they are, or how compatible The Crew is with various wheel offerings, because I don’t own one. Still, those are your potential options. 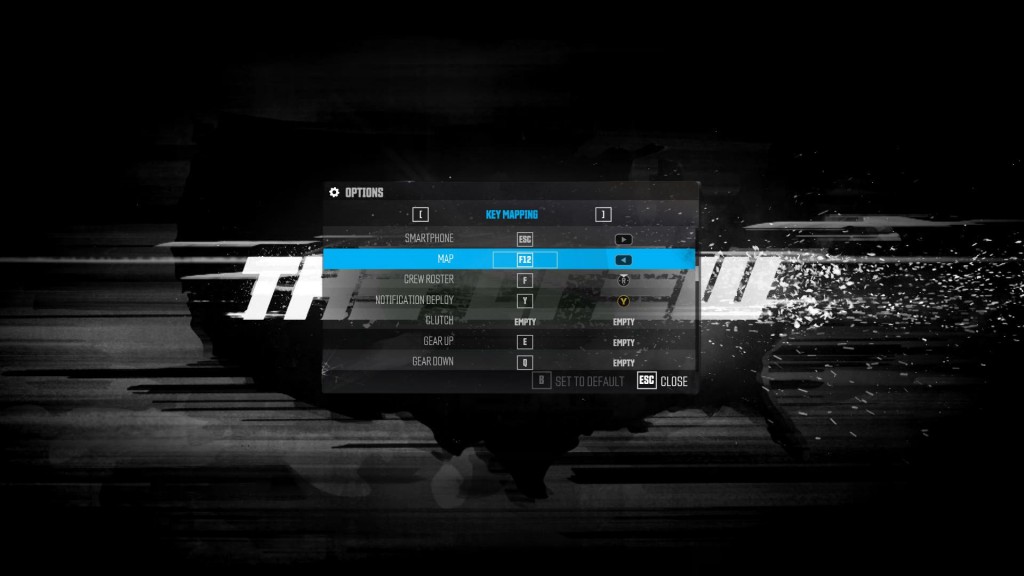 No game, I just wanted to take a screenshot. Not make my map key F12.

Which just leaves the ability to remap keyboard controls. If you’re enough of a rebel to be trying to play a racing game entirely with a keyboard. Godspeed, maverick. 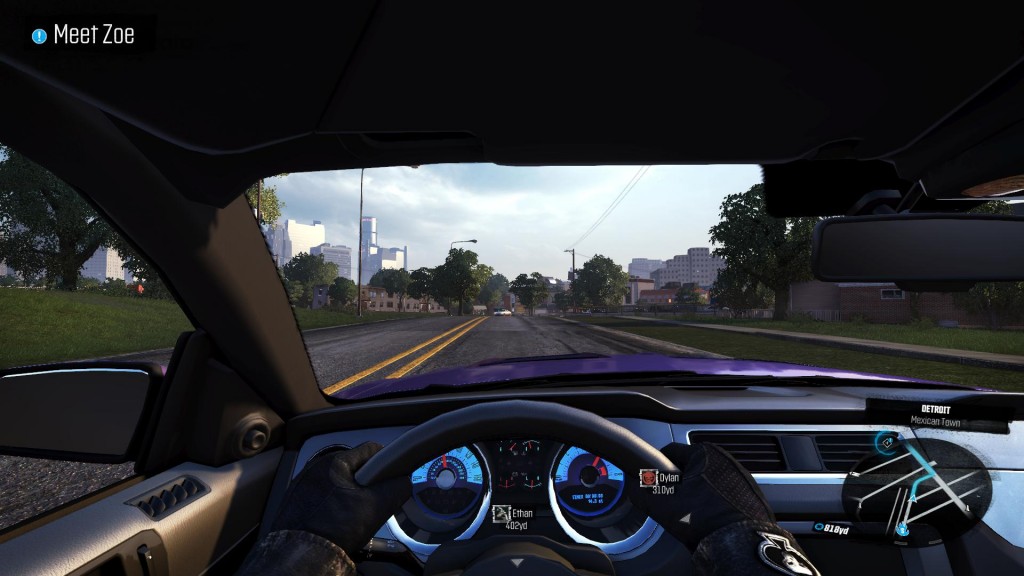 So, after a couple of hours play, I’m able to report that the PC version of The Crew seems … tolerable. Acceptable, even. I’m a little disappointed that no amount of graphical options sorcery will squeeze out 60fps in the city areas, but having it hit a consistent 60 in the countryside parts is at least a significant improvement over the beta. Anybody with a hardier processor than my old i3 will probably do just fine.

Or perhaps I’m just paying the standard Ubisoft “you don’t have an Nvidia card” performance tax. It’s hard to be sure.

Anyway. Early impressions suggest that, in this sample size of one PC, The Crew has avoided an Assassin’s Creed: Unity style technical disaster-launch. I’ve no doubt it’ll exhibit the usual collection of PC quirks once it’s out there in the wider world, but based on what I’ve played it seems respectable enough.

By Steven Wong21 hours ago
Previews