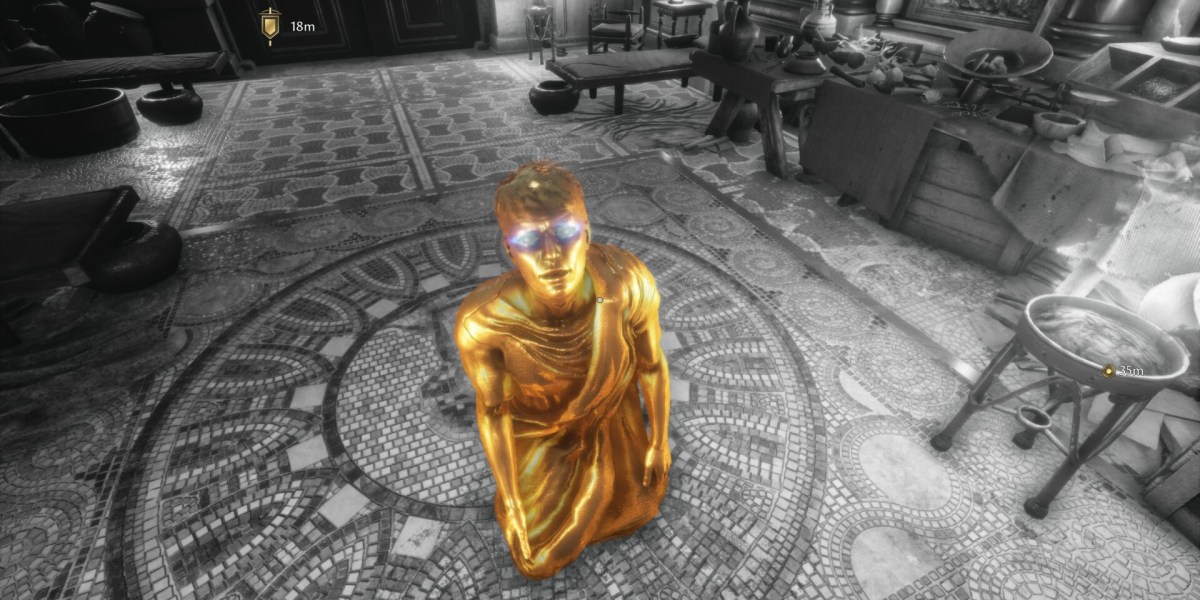 I love time loop stories. Sure, I get sick of seeing them pop up in anime, but I haven’t seen them in games very often. The Forgotten City is actually a full-scale remake of an identically titled Skyrim mod from a few years back. As the game was remade entirely in a new engine with original assets, animations, and everything else, substantial changes also needed to be made to its story and systems. The game is short, taking only five or six hours to get through (or even less if you don’t go for the true ending), but the high quality of the writing and compelling nature of the world design makes it easy to recommend to anyone who enjoys narrative adventures.

The Forgotten City starts off with your character waking up on a riverbank. A woman asks you some questions, some of which have a bearing on some of your capabilities, and requests that you head into some nearby ruins to find a man named Al. You head on in, only to find that Al is not only very old, but also very dead. You then stumble into a portal and find yourself caught in an underground Roman city 2,000 years in the past. There are Romans and folks of a few other nationalities around, but they’re all trapped in the city and can’t leave.

The further kicker is that the city is under The Golden Rule: all shall suffer for the crimes of one. If any one of the city’s inhabitants commits a crime, golden statues will come to life and turn everyone into immobile golden statues. Talking to the city’s magistrate, Sentius, makes it clear that someone is going to break the rule that day, and he wants you to figure out who it is. Once a crime is committed, a voice rings out and Sentius runs to open a portal. Entering it will return you to the start of the day. 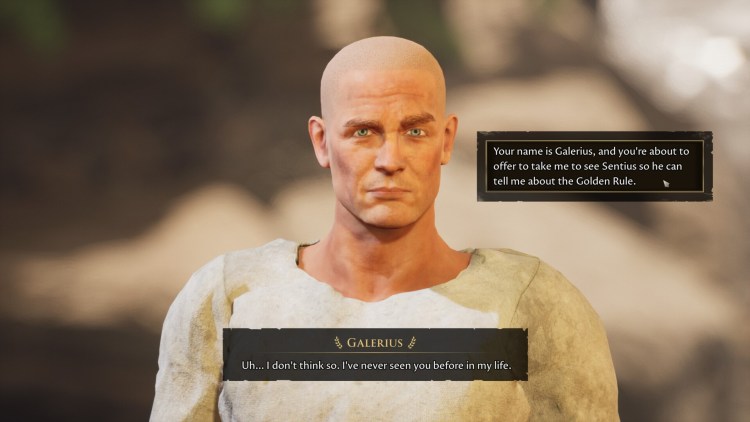 The story is probably the best thing about The Forgotten City, and it isn’t hard to see why the original mod won a Writer’s Guild award. The dialogue is wonderfully written and the game is populated by interesting, distinct characters who are mostly brought to life by spirited vocal performances. Most of the voice acting is high quality, although there is a performance or two that’s a bit at odds with the rest of the cast. On top of all that, the philosophical concepts on display are thought-provoking and are integrated into the narrative in compelling ways. Then there’s what the game has to say about cultures and religious myths that make everything come together so well.

To put it simply, The Forgotten City is easily worth playing for its narrative alone, even if the true ending is a bit silly. Unlike many narrative adventures, however, there’s also a fair amount of meat to the rest of the enterprise. You can freely explore the city and can talk with any of the characters in any order you want. The game world isn’t particularly large and doesn’t have many secrets to find, but the map is well designed, memorable, and feels lived in.

The game is played in the first person still, but all of the old Skyrim abilities are gone. This isn’t an action game and you do not acquire an arsenal. There is some combat here and there, though. At one point in the story, you get a golden bow that shoots arrows that, you guessed it, turns things into gold. You can actually interact with a set of objects to turn them into tradable items, but most of the money you find is in chests. Only a couple of characters have anything to buy, although only one item is sold. You can also steal it, but you’ll have to make a run for the portal and restart the day, as that breaks The Golden Rule. Oops. 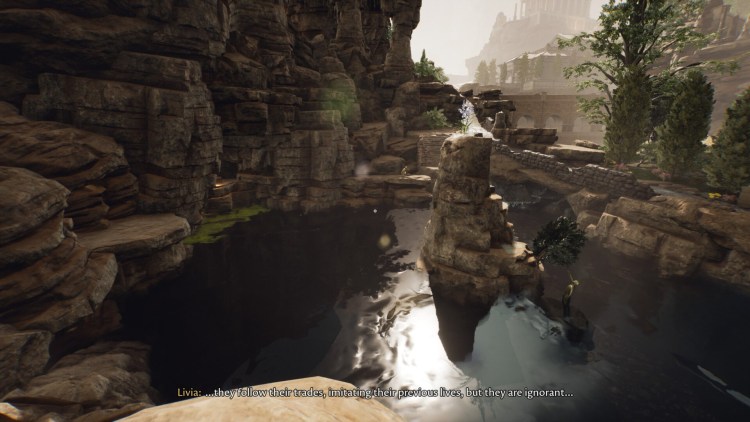 You can actually steal a fair amount of objects but, suffice to say, it’s always a no-no. Also, while talking to other characters, certain dialogue choices will royally piss them off, which will lead them to refuse to speak with you further. Until you go back in time, at least. As for the aforementioned combat, there are two sections where you have to fight creepy enemies that I won’t be spoiling here. Their existence is closely tied to the plot and, boy, is it all sorts of messed up.

These enemies must be shot with the golden bow to, well, turn them into gold. Headshots pull this off immediately. You can also dispatch them with a regular bow, but where’s the fun in that? You’ll find arrows scattered throughout the environments, and the game gives you plenty. There may not be much combat, but the bows work fine and the action doesn’t detract from the rest of the game at all. You can also shoot citizens with your bow whenever you feel like, but you already know exactly what happens when you do that.

The Forgotten City has four endings, with the first of these being extremely simple to accomplish. Only one of them is the true ending, though, and it comes with a satisfying epilogue that puts a neat little bow on the plot. Getting that true ending does take a great deal more legwork than the other three do. Speaking of which, you’ll have to reload a save before certain points to go back and get more endings, as there isn’t an automatic endgame save that generates once you get an ending. But you can save at nearly any time, so it’s not at all hard to make your own. 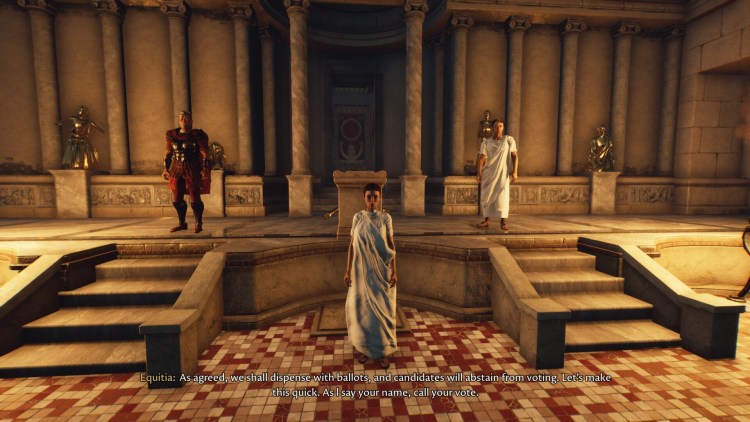 One of the only actual problems I have with the game is the length. I wish they would have added some more to it to further flesh the experience out since they went through so much trouble to create all of these assets. There are also situations where you could easily affect change in different ways, but there aren’t any options programmed in, which irked me. But, as it stands, this is a unique, wonderfully written, and captivating experience from beginning to end. Not to mention that it’s also quite lovely, which is especially impressive given that the team is only made up of a few individuals. All fans of narrative games will likely get something out of The Forgotten City. And it’s unlikely it will be forgotten any time soon.

Deftly written, smart, and consistently clever, The Forgotten City makes for a rousing, spirited adventure that is well worth taking part in. I wish it were longer, but that doesn't do much to knock what has been accomplished here.

The biomes of Forza Horizon 5 shown off in stunning showcase