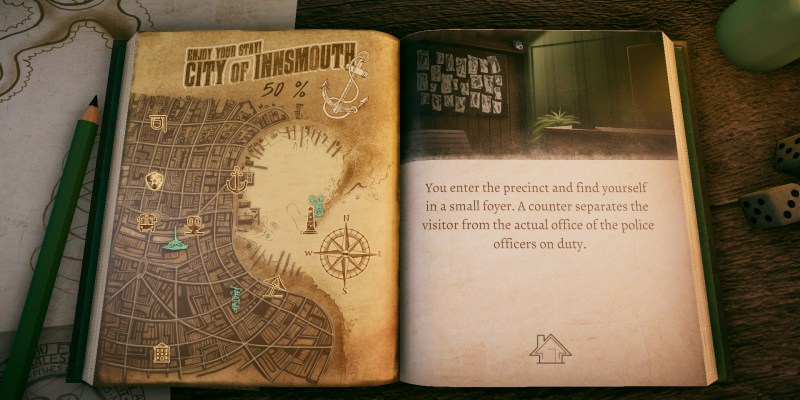 The last decade in horror gaming owes a great deal to H.P. Lovecraft. The many nightmares that host his eldritch creations are fertile ground for interactive horror. Lovecraftian horror will have a prominent place in the industry for years to come; fear of the unknown can’t ever grow old. What does, however, is the self-serious tone that The Innsmouth Case’s contemporaries adopt. Sometimes, you need a break from the bleakness. Sometimes, you just need some comedic relief.

The developer-dubbed horror-comedy is just what the doctor ordered. Though, “comedic relief” may not be wholly accurate — the constant barrage of quips and references ensures that there’s no “seriousness” to be relieved from. The Innsmouth Case is a charming text adventure that brings the seaside town of Innsmouth into the twenty-first century, but leaves the horror behind. That Lovecraftian DNA is compromised by an overabundance of internet humor. Its value is in its quirky writing, not in its ability to leverage cosmic horror. 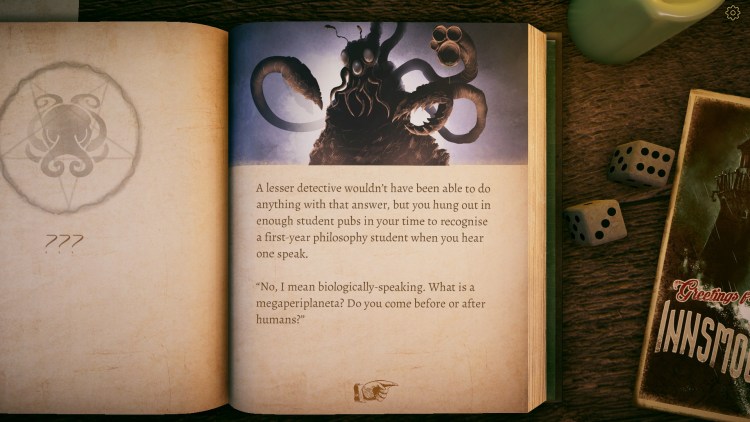 The pen is mightier than the sword

A down-on-their-luck detective finds themselves on a trip to the titular town at the behest of a mysterious woman. She promises a pretty penny for the safe return of her daughter, and our struggling detective is in no position to refuse. Armed with existential dread and a silver tongue, the brave/cowardly hero must battle the town’s hostile denizens. Although the game isn’t without stylish art and animations, its evocative, colorful writing is what brings Innsmouth to life. The protagonist, with their peculiar lens on life, never fails to find the right words for their surroundings.

The game effortlessly switches between elegant, foreboding descriptions and humorous naiveté, though the latter dominates the story. No matter how dire the situation, a random quip will always weasel its way in. The humor dilutes the horror; sections free from comedy fail to make a case for themselves. The many decisions you’re tasked with making reflect the flippant nature of the protagonist. 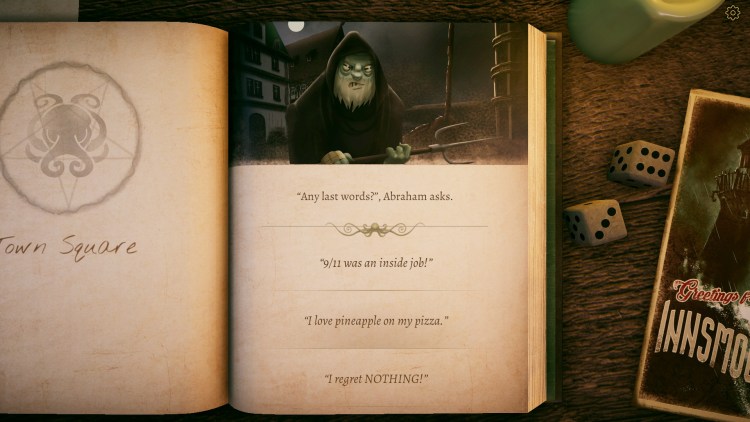 The Cthulhu mythos inspires the setting, environments, and conflict, yet no short stories could predict this intrepid detective’s moves. It’s difficult to gauge the significance of choices as they become available. The most trivial options could lead to the most absurd outcomes, and the most daunting forks in the road may be nothing more than illusions. Rational problem solving is not the name of the game; The Innsmouth Case prefers a more chaotic approach. It features a branching narrative that encourages trial and error.

With 27 endings, replayability is king. Dozens upon dozens of playthroughs, learning something new each time, is the only way to play. Decisions come at you fast, but only because you’re meant to keep trialing options in hopes of accessing a new branch in the story. The endless deluge of text becomes a barrier between you and that one choice you didn’t make.

Hitting ESC lets you skip to the next choice, and you’ll find yourself doing so a lot. The game quickly devolves into a string of key spam and mouse clicks. Vivid descriptions and cheeky jokes take a backseat to the ending collect-a-thon. Various checkpoints provide additional aid by organizing your search by area. 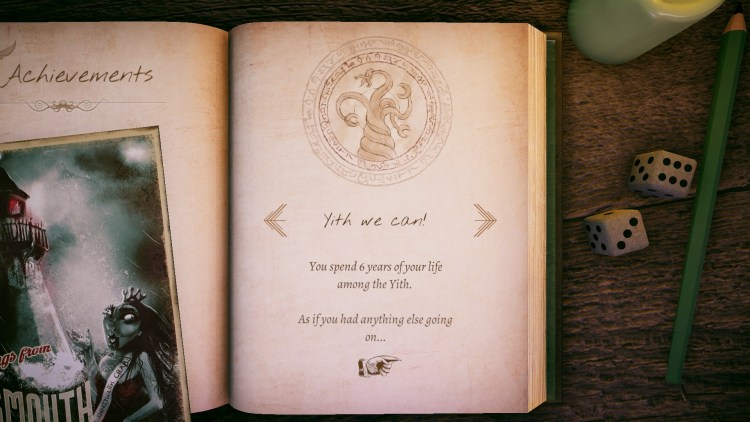 Too many routes to count.

The Innsmouth Case is good for a few hours of text adventuring before the overwhelming majority of your runs are fruitless. With every trip through Innsmouth, I felt less and less involved in the mystical happenings of the town until I was no more than a passerby. Half-hour visits turned into one-minute sprints as part of my race to find another crumb of story. As the veil of mystery was quickly pulled back, my interest in Innsmouth waned, until it vanished altogether.

A sea of text

For Lovecraft lovers, The Innsmouth Case dodges the traditional themes and oppressive atmosphere that defines the works it’s inspired by. Its strength instead lies its protagonist’s relatable, adorkable demeanor and rapid-fire delivery. The hunt for new side stories and endings is genuinely enjoyable, even its modern rendition of Innsmouth is without the horror you’ve come to expect.

The Innsmouth Case is a charming text adventure that brings the seaside town of Innsmouth into the twenty-first century, but leaves the horror behind. In its place is a humorous hunt for story bits that scratches a much different itch than was originally intended.